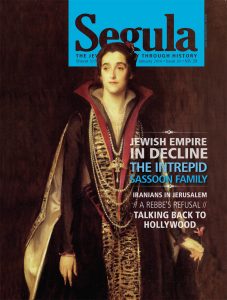 Few are aware that in 614 Jews briefly regained control of Jerusalem. Who allowed them to renew the Temple sacrifices, and why were these Jews’ high hopes suddenly dashed? A forgotten chapter of Jewish history

From the creative team behind it right down to its story line, the first talking film couldn’t have been more Jewish. The protagonist of The Jazz Singer was the latest in a long line of Jewish cantors

The legendary Rebbe of Munkács made an art of objection. Zionism, the Reform movement, transatlantic emigration, even daily Talmud study groups – he vehemently opposed them all. His policy of principled rejection became almost instinctive, spreading from his followers to  the wider ultra-Orthodox community

Baruch Rabinowitz wandered all his life – and not just from one continent to another. From the ultra-Orthodox bastions of Munkács to South American academia to the Israeli rabbinate, the Munkácser Rebbe’s successor defied definition and boundaries

Recent discoveries at prehistoric sites in Israel are overturning decades of conventional wisdom. Could Neanderthals have coexisted with modern man on this land bridge between Asia, Europe, and Africa, and who was the common ancestor of all Homo sapiens sapiens?

A document thief’s attempt to cover his tracks is the only reason that Miriam, an anonymous pioneer from Ein Harod, is known to us today