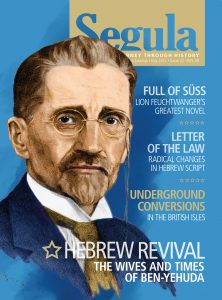 It took him twenty years to produce just one volume of his dictionary, and fewer than three hundred entries in its sixteen volumes were words of his own invention. Nevertheless, Eliezer Ben-Yehuda is rightly credited with reviving Hebrew as a spoken language

Letter of the Law // Haggai Misgav

The Aramaic alphabet adopted by the Phoenicians conquered the ancient world – including the Hebrew Bible – and set off a culture war between Samaritans and returning Jewish Babylonian exiles. Which letters were to be sacred – the square Aramaic or the cursive Canaanite? The answer lies with history

Few were further from their faith than Joseph Süß Oppenheimer, the powerful, licentious adviser to the wealthy duke of Württemberg. Yet when forced to choose between the gibbet and the baptismal font, Oppenheimer opted to swing. His life inspired one of the most famous Jewish historical novels, Lion Feuchtwanger’s The Jew Süss

Between 1809 and 1816, Elimelech Mudahi’s “underground” rabbinical court in London oversaw dozens of conversions, despite the reservations of the local Jewish community – and even Jewish law

Writing from the dusty depths of Old Cairo, Solomon Schechter tells fellow scholar David Kaufmann of the unbelievable wealth of ancient material he was about to reveal to the world