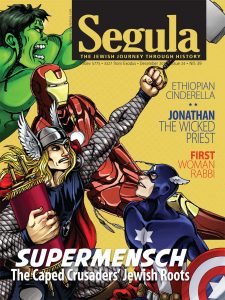 Victim turned villainess, Yodit/Gudit/Judith is a legendary Ethiopian figure shrouded in mystery. Was she a renegade Christian or a vengeful Jewess? It depends on who’s telling the story

As Jews and others pioneered the American West, Ray Frank blazed a different trail, advocating – and demonstrating – increased women’s participation in Jewish life

The fledgling comics industry wasn’t glamorous or high-powered, but it made talented Jewish cartoonists very rich. They may not have been great synagogue-goers, but the superheroes they created drew on their Hebrew-school heritage nonetheless