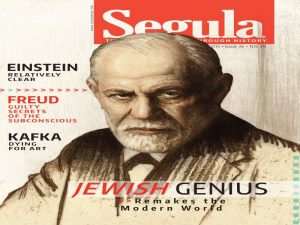 Exchanging the lab for the analyst’s couch, Sigmund Freud defied the scientific conventions of his day. The man who attributed supreme importance to early childhood benefitted from his own adoring Jewish mother’s assurances that he was destined for greatness

Too Short A Story // Zohar Maor

No one captured the modern terrors of alienation and bureaucracy better than Franz Kafka, penning some of the 20th century’s best-known short stories. Yet family, religion, and Zionism also drew him, though all three remained unattainable dreams trapped in the prism of his short life

Was the fate of Judea as a Roman province sealed from the moment Julius Caesar switched sides in the Hasmonean leadership struggle? Or could Herod’s brutal path to kingship still have been blocked? -Either way, 47–46 Bce marked a turning point in Jewish history

A booklet produced by a Zionist youth movement in Rhodesia reflects a rich and vibrant community that lasted less than a century. Its young authors had no idea civil war was about to change their world forever

In the early Zionist villages, postal services were under European auspices but had their own unique flavor – until the Turks cracked down