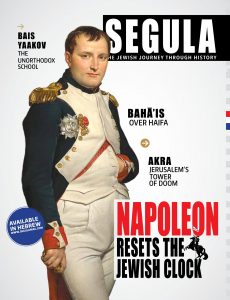 Ever since its mystic 19th century beginnings in Shi’ite Iran, the Baha’i faith has been under attack, and its adherents driven from place after place. How did the Baha’is’ message of peace and love of God come to be broadcast from the slopes of Mount Carmel? And how does Acre fit in?

The giant Akra fortress and its garrison of Hellenist soldiers strew fear among the city’s Jewish residents well after Hasmonean victories brought autonomy to Judea. Maybe that’s why it was razed it to the ground when the Maccabees finally conquered. Does that mean it couldn’t be the tower just discovered by the City of David?

Aside from transforming Europe militarily and politically, Napoleon redefined the Jews’ place in his secular empire. To that end, he even revived the Sanhedrin

From total opposition to girls’ education, the Orthodox rabbinic establishment effected a complete turnaround, adopting the Bais Yaakov educational network as its own. One woman stood at the center of that revolution – Sarah Schenirer, a seamstress from Kraków whose life story is relatively unknown

Until the early modern period, Jewish widows could be exploited by recalcitrant brothers-in-law just as wives can still be victimized by husbands unwilling to divorce them. An unusual contract protected a bride from just such an eventuality