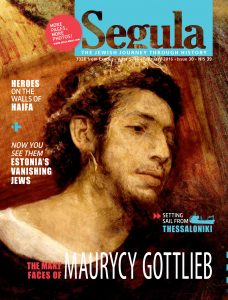 Maurycy Gottlieb aspired to be Polish Jewry’s national artist, changing its image with his brush and palette. His tragic death cut short his musings on Jewish identity

From Port to Port // Atar Peleg

Nothing fazed the potential immigrants from Thessaloniki’s bustling port – neither the draconian union contract they had to sign nor their working on Saturday, which they’d never done back home. Was their absorption into Palestine’s Jewish workforce a success story or just exploitation?

Heroes on the Walls of Haifa // Yuval Malachi

The Crusader forces besieging the high walls of Haifa were unprepared for the fierce resistance they met. On the ramparts, Jews and Muslims fought side by side, simple laborers and soldiers, united only by the danger they faced

No Jew Left Behind // Shmuel Faust

A Day at the Museum