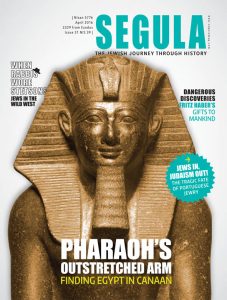 The Man Who Plucked Bread from the Sky // Ran Levi

One of the greatest chemists of all time, Fritz Haber saved the world from famine but went on to father chemical warfare. Even his belated Zionism can’t redeem his dubious legacy

Egypt’s legacy in Canaan might not be quite the right theme for Pesach, but it’s certainly a side of the story we don’t usually hear. The Israel Museum’s new exhibition makes sure we do

Among the many immigrants to the U.S. who went west to seek their fortunes, most Jews struck gold selling dry goods rather than prospecting. Once settled, these pioneers built towns, communities – and a surprising variety of synagogues

Manuel of Portugal had to choose between his Spanish bride – and her powerful parents – and his faithful Jewish subjects. The Portuguese monarch preferred to have his cake and eat it too, and as usual the Jews paid the price

Ernst Israel Bornstein’s achingly painful Holocaust memoir traces the learning curve of survival; how the smallest details – a hand withdrawn or outstretched, a cut bandaged or neglected – could mean life or death