Recent discoveries at prehistoric sites in Israel are overturning decades of conventional wisdom. Could Neanderthals have coexisted with modern man on this land bridge between Asia, Europe, and Africa? And who was the common ancestor of us all?

The entire world is populated by a single species of man – modern man, otherwise known as Homo sapiens sapiens (a subspecies of Homo sapiens). Prehistoric remains have made us aware of other human species, preceding or coexisting with the earliest modern humans. The material culture they left behind – graves, food, tools, etc. – allows us to reconstruct their surroundings and analyze the development of our species. From the rich archaeological record revealed by past and ongoing excavation in Israel, it is abundantly clear that this area of the Middle East played a crucial role in these evolutionary processes.

The land of Israel was uniquely suited to prehistoric man’s nomadic existence. The varied climate in the region created multiple ecosystems, providing a wide variety of food sources. Located at the crossroads of Africa, Europe, and Asia, prehistoric Israel offered a preferred route for the first hominids to leave Africa and spread across other continents.

Homo erectus, or upright man, was the first hominid to venture out of Africa and populate areas of Europe and Asia over 1.5 million years ago. Approximately five hundred thousand years ago, distinct populations began developing in different regions. Neanderthals evolving in isolated Europe during the Ice Age adapted their lifestyle to the frigid surroundings. Their DNA and skulls developed differently from that of Homo sapiens, and their skeletons grew thicker.

The earliest Neanderthal remains discovered in Europe have been dated to approximately four hundred thousand years ago. For millennia, Neanderthals were the only humans on the continent, from which they spread into West Asia. They never made it to Africa, and evidently became extinct some thirty thousand years ago, when modern man reached Europe in the Upper Paleolithic era. 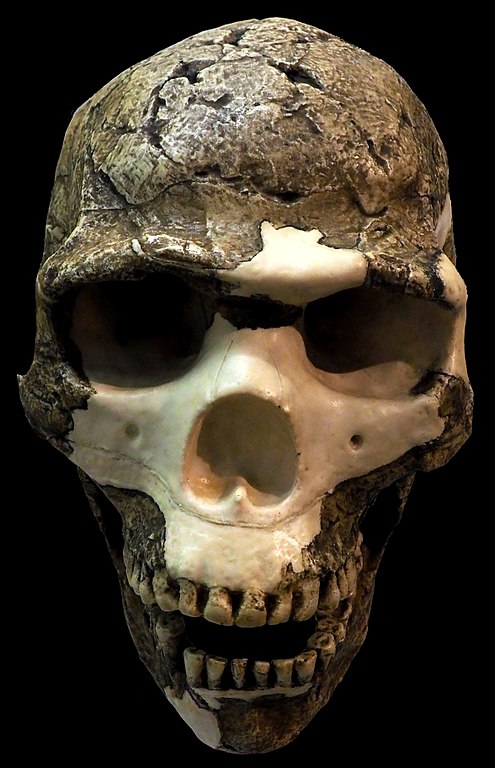 Cast of reconstructed homo sapiens skull from the Es-skul cave

Early Homo sapiens, a species biologically similar to modern man yet anatomically distinct, evolved in Africa at about the same time the Neanderthals appeared in Europe. Both species descended from Homo erectus, but early Homo sapiens already shared the same skull structure as modern man as well as several other features. The first remnants of modern man – Homo sapiens sapiens – were found in Africa and have been dated to roughly a hundred thousand years ago.

Prehistoric strata are dated mainly by their stone tools, such as this lower Paleolithic hand axe from the Tabun Cave in the Galilee, discovered by Dorothy Garod in the 1930s and on display in the British Museum

Until recently, human history seemed relatively uncomplicated. Approximately five hundred thousand years ago, two species of man evolved from a common ancestor. One species was the Neanderthals of Europe and West Asia, and the other was Homo sapiens of Africa. Modern man evolved from Homo sapiens about a hundred thousand years ago, leaving Africa to populate the entire ancient world, which included Europe and Asia. He reached Australia nearly forty thousand years ago, colonizing Europe around the time the Neanderthals became extinct, making modern man the only surviving human species in Europe.

Recent discoveries in Israel, however, paint a far more complex and fascinating picture of the crucial period in which Homo sapiens emerged.

At two sites in northern Israel, burial grounds containing remains of early Homo sapiens were discovered among layers of Middle Mousterian culture (see infographic on p. 56) and dated to between ninety thousand and a hundred thousand years ago. Ten graves were found in the Es-Skhul Cave, in northern Israel’s Carmel mountain range. A pig’s jaw was also uncovered nearby, presumably the remains of a sacrifice. In the Qafzeh Cave, in the hills around Nazareth, the remains of twelve buried children and adults were discovered. The horns of a red deer were found clasped to the chest of one of the children, and other graves contained lumps of red ochre as well as seashells.

But the plot thickens. Layers of Late Mousterian culture, dated to between fify thousand and seventy thousand years ago, have come to light elsewhere in northern Israel. These include Neanderthal graves. In the Tabun Cave, only about fifty meters from Es-Skhul, remains of a Neanderthal woman and the jaw of another human were found buried in the Middle Paleolithic strata. Similar strata, containing the remains of a Neanderthal baby and an adult male, were uncovered in Kebara Cave, east of Kibbutz Ma’agan Michael. In the Amud Cave, in the Lower Galilee, the grave of a Neanderthal man was found together with the remains of a ten-month-old, which had been tucked away in a small niche. The jawbone of a deer was found alongside them. 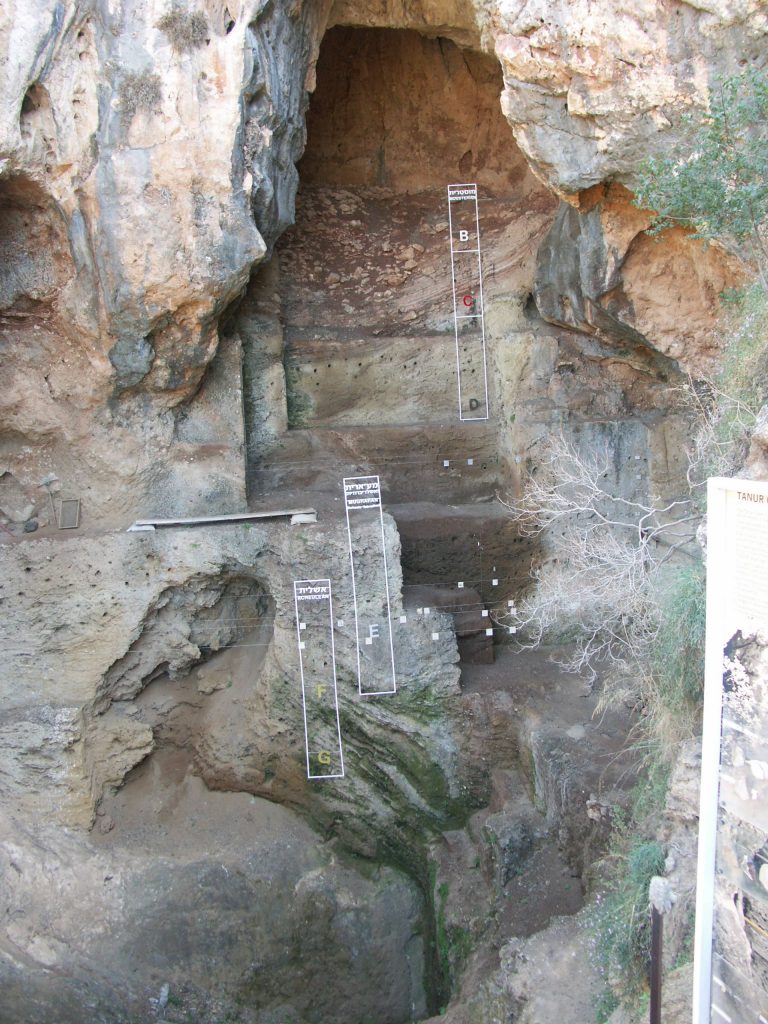 Tabun Cave, in the Carmel range, indicating where artifacts of various Stone Age cultures were located

Mingling of the Species?

Although many of these findings were excavated as early as the 1930s, they were not acknowledged by the academic world as Neanderthal remains until almost fifty years later. It was widely accepted that Neanderthals were the only species of man in the Middle Paleolithic era, to be supplanted by modern man some forty thousand years ago, during the Upper Paleolithic period. The discoveries in the Es-Skhul Cave proved that early Homo sapiens, the precursor of modern man, existed here before the arrival of Neanderthals in the region. The similarity between the artifacts created here by early Homo sapiens on the one hand, and by Neanderthals on the other, is so close that they are sometimes indistinguishable from one another. Both societies used similar chiseling techniques to create flint tools and other stone utensils; their burial rites and votive offerings were likewise much the same. Could these similarities, together with the proximity of the sites identified with each species, imply mutual influences? Could early modern man and Neanderthals have coexisted here?

Examination of the skeletons discovered in Israel revealed that the local early Homo sapiens had several typically Neanderthal characteristics, including heavier skeletons, while none of the Neanderthal skeletons displayed the full structural elements of classic European Neanderthals. These findings suggested a surprising hypothesis: all human remains of the Middle Paleolithic era in the land of Israel belong to a single species of man – a species exhibiting a wide range of traits, some associated with Neanderthals and some with Homo sapiens. The discovery of the remains of modern man, Homo sapiens sapiens, in an Upper Paleolithic context – some fifty thousand years before the species was assumed to have existed – revived questions regarding the origin of this species. Analyses of prehistoric DNA show that modern man originated in Africa. Yet mapping of the Neanderthal genome revealed that the population of modern Europe and Asia derives up to 4% of its genetic characteristics from Neanderthals. Somewhere or other, the two populations must have mixed.

These findings indirectly support the claim that sometime around the beginning of the Upper Paleolithic era, a species of man emerged in and around the land of Israel. Living in the transition period before Neanderthals were displaced by modern man, this species possessed some Neanderthal characteristics as well as traits of Homo sapiens sapiens, and could well have been the non-African ancestor of modern man.

Unfortunately, not enough human remains from this period have surfaced in Israel to confirm the existence of such a species. The meager findings excavated so far include a skull fragment found in Manot Cave, in the Upper Galilee, and an Upper Paleolithic burial ground unearthed at an archaeological site in Nahal Ein Gev, east of the Sea of Galilee. 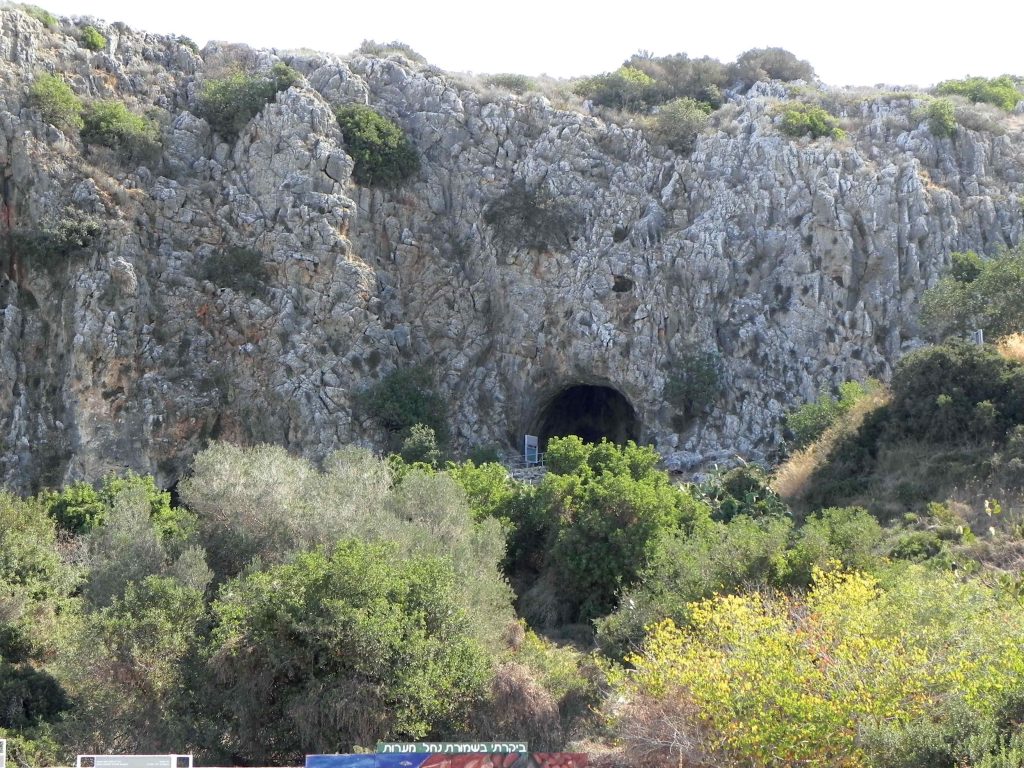 Thanks to the rich prehistoric remains discovered in the caves of the Carmel mountain range, near Haifa, the Carmel nature reserve was declared a UNESCO World Heritage Site in 2012. Most of the area’s important discoveries were concentrated in four caves

Manot Cave was discovered in 2008 during construction work in the area, which damaged the cave roof. Explorers visited the site immediately afterward, reporting various findings – including a human skull – to the Israel Antiquities Authority. A later archaeological survey revealed a magnificent cave with active stalactites and stalagmites and a treasure trove of archaeological remains. Digs conducted at the site every summer since 2010 have far from exhausted the cave’s rich potential for prehistoric research. Preliminary lab tests have attributed the human skull to modern man, Homo sapiens sapiens. Stone utensils discovered in a small area at the bottom of the cave are artifacts of Mousterian culture (up to forty thousand years ago – the Middle Paleolithic era), while rich layers of Aurignacian culture (up to thirty-one thousand years ago – the Upper or Late Paleolithic era) characterize much more of the cave. Further excavations may yet enhance our understanding of the earliest modern man living in ancient Israel.

Slowly, piece by piece, researchers are putting together the puzzle of modern man’s development in the land of Israel and throughout the world. Did man indeed evolve here from a local population that then dispersed globally? Who was that common ancestor, with attributes stemming both from Homo sapiens and Neanderthals? Who created the material culture found here during that critical period between thirty thousand and fifty thousand years ago? Whatever the answers, modern man’s beginnings in Israel are undoubtedly among the most fascinating chapters in the history of this country and of mankind. 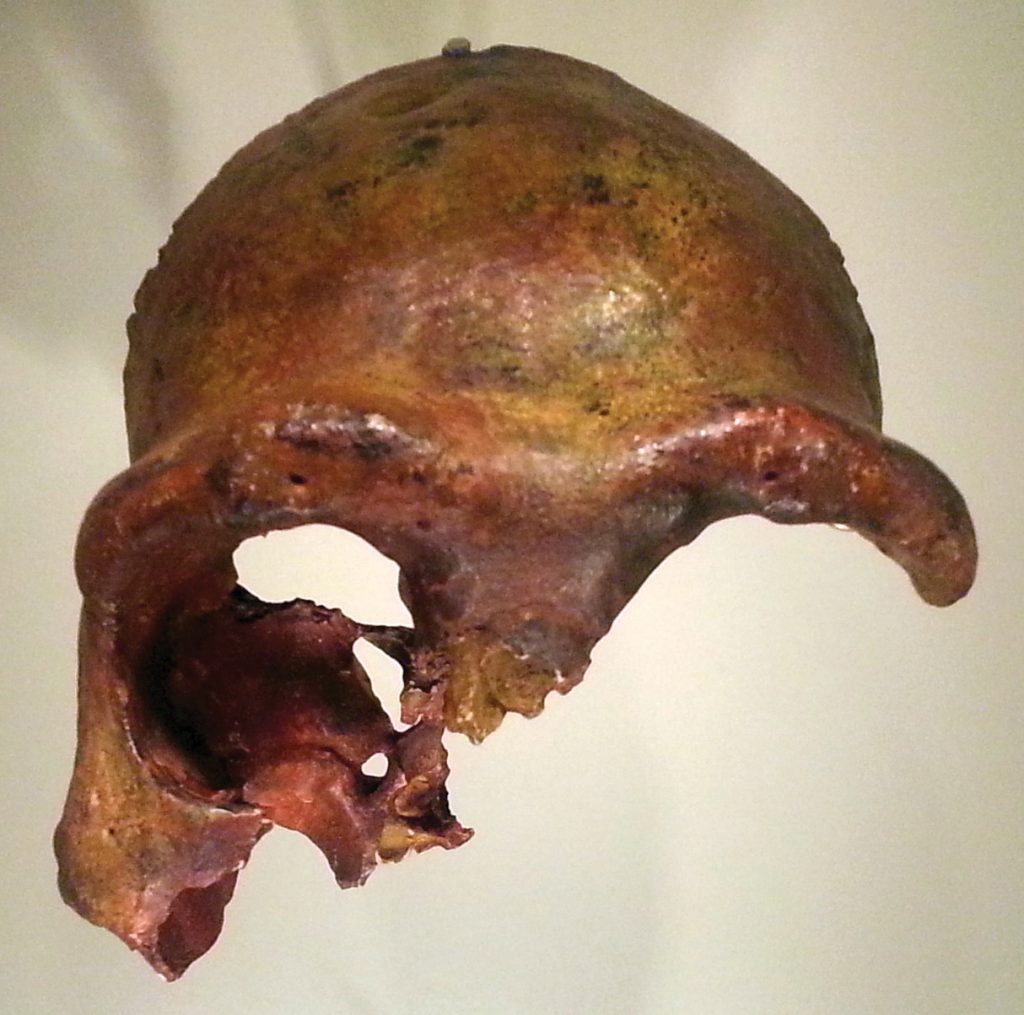 This skull fragment, known to archaeologists as the Zuttiyeh skull or Zuttiyeh 1 (for the Zuttiyeh Cave, where it was found), is better known as Galilean Man. Now on display in the Israel Museum’s Archaeology Wing, it has been attributed to Acheulo-Yabrudian culture and dated to between 220,000 and 400,000 years ago, making it the oldest skull unearthed in Israel to date