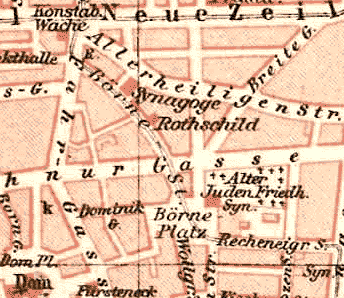 Frankfurt’s Jews were finally allowed to come back to the city after a two-year exile. They’d been thrown out after riots organized by Vincent Fettmilch, a charismatic baker who roused the townspeople to attack the Jewish quarter of Frankfurt after his repeated petitions to have the Jews expelled were ignored. On August 22 1614, the day of the attack led by Fettmilch, who styled himself the “Jews’ Haman,” two thousand local Jews placed their women and children in the cemetery at the end of the Jews’ Street for safety, then prepared to fight to defend them from the mob. In the ensuing fight, two Jews and one Christian were killed, and the Jews retreated to protect their families while the mob plundered and burned their homes.

The city gate was opened to allow the Jews to leave by boat on the River Main, never to return. But two years later, Holy Roman Emperor Matthias cracked down on Fettmilch’s rule of terror in Frankfurt, had him arrested and convicted and allowed the Jews back into town. The date they set to mark their deliverance was 20 Adar, the previous day being observed as a fast commemorating their exile. Fettmilch, like Haman before him, was finally hanged – on March 16 1616. The Jews of Frankfurt called the day Purim Winz, and sang a specially joyous tune for the Adon Olam prayer concluding services that day. They also read a poem called the Winz Megilla, recounting the tale of their plight and deliverance.