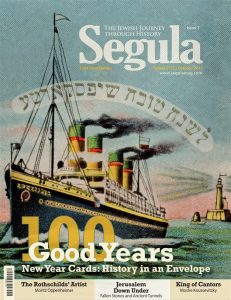 From Vilna to Warsaw and from Tel Aviv to New York’s Carnegie Hall, Moshe Koussevitzky was always certain of his mission – to preserve the soul in cantorial music and bring it to the Jewish masses

Portrait of the Artist as a Young Jew // Yemima Hovav

Beneath the City of David // Sara Jo Ben-zvi

The newest discoveries uncovered by the Elad foundation are nothing short of sensational. A visitor to the City of David can now visit Byzantine and Roman ruins, walk the very steps of the Tyropean Way, and follow in the paths of a hidden drama of Jewish heroism that played  out within subterranean passages

The first civilian flights in Israel didn’t use land-based airports. Imperial Airways, forerunner of British Airways, used to land its planes on the Sea of Galilee en route to the Far East

Who was Agrippa? A loyal servant of the Roman empire, or a faithful Jew and brilliant statesman engaged in a precarious juggling act between conflicting interests? The coins he minted tell a double-headed story

Splitting Shares in the World to Come // Yohai Ben-Gedalia