Ordered as charity, ‘Jacques and Berthe Lipchitz’ is considered to be one of Amadeo Modigliani’s most sophisticated paintings

The Art of Friendship

Amedeo Clemente Modigliani’s tragically short life began in Livorno, Italy. A Sephardic Jew, he descended from the famous 17th-century philosopher Benito (Baruch) Spinoza. Undoubtedly one of finest painters of the modern era (and my personal favorite), Modigliani moved to Paris at age twenty-one, where he became known for the elongated faces, necks, and figures of his nudes and portraits. Modigliani’s modernist Expressionism went unappreciated in his lifetime, and he died penniless in 1920, felled by tuberculosis at age thirty-five. His pregnant partner committed suicide after his death, leaving a daughter. 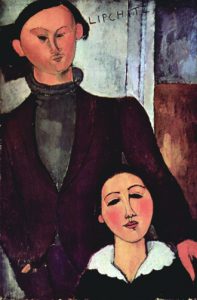 Jacques Lipchitz, a well-known Cubist sculptor originally from Lithuania, commissioned this portrait on the occasion of his marriage to Russian Jewish poet Berthe Kitrosser, hoping to give his friend Modigliani some much-needed financial help. The double portrait is one of only three in Modigliani’s oeuvre. The artist made about twenty drawings on the first day; the next day, he declared the picture finished. To extend more assistance to his friend, Lipchitz persuaded Modigliani to work on the portrait for another two weeks, for the modest price of  “ten francs per sitting and a little alcohol.”

Jacques and Berthe Lipchitz is a complex and enigmatic character study. Posed in an abstract architectural interior, Lipchitz is handsomely dressed and stands casually with one hand on Berthe’s shoulder. The couple’s masklike faces reveal subtle personality clues; Berthe’s gentle sensuality, large, spreading eyes and lips, graceful neck, and open, kindly visage offer a striking contrast to Jacques’ pride. His small, compressed features slope inward, making him look calculating and suspicious as he towers over his wife, domineering and protective. 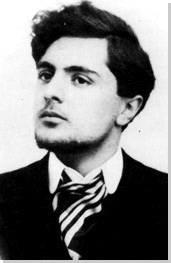