Isidor Kaufmann’s work aimed to reveal the light of Jewish culture in all its beauty and nobility, even in the ghetto. His crowning achievement was Emperor Franz Josef’s purchase of one of his paintings

Stillness. Silence. The Sabbath has begun.

While most Sabbath scenes of women focus on candle lighting, Friday Evening depicts the moments afterward, when a wife waits calmly for her husband to return from the synagogue. This view of a Sabbath table not yet fully set distills an air of anticipation, inviting us to ponder what’s missing and why. The mirror on the wall, reflecting the candles, the covered loaves, and the wine goblet, deepens the quietly contemplative atmosphere. The reflected details seem to point to the essence of the Sabbath, although clearly it’s much, much more. The painting’s many pairs – two candlesticks, and their reflections, two wall sconces, the Kiddush cup and the book of Psalms – contrast with the woman sitting alone, with only the faintest outline of another chair to suggest her partner.

Although the artist never finished this painting, begun a year before his death, it shines with light and air yet remains incredibly introspective. Its numerous details don’t detract from the its subject’s inner stillness, reminding us that the Sabbath is a time to reflect. The painting encourages us to pause in our busy lives and let the silence of the Sabbath envelop us, become part of us, and bless us with its unique peace. 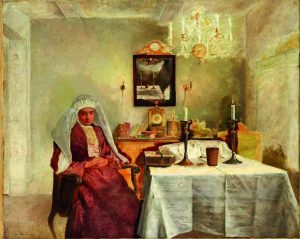 Isidor Kaufmann (1853-1924) was born in Arad, in the Kingdom of Hungary (now Romania), and studied art in Budapest and Vienna. Though Kaufmann came from an assimilated background and received little or no Jewish education, his early works – like those of many of his Jewish contemporaries – show Jews at prayer and in the synagogue. In 1895, however, the artist began exploring rural Jewish communities, painting Talmudic scholars and interiors of Jewish homes. Everyday family scenes and images of Jewish women at their chores proved surprisingly popular among the rich, assimilated Jews of Vienna. Kaufmann’s crowning achievement was Emperor Franz Josef’s purchase of The Rabbis’ Visit (c. 1886), which was subsequently presented to the Vienna Museum of Fine Art.

Kaufmann studied the Hasidic shtetl and shtiblach (small, informal synagogues) of eastern Europe, producing increasingly refined portraits of the traditional Jewish way of life. He aimed to reveal the light of Jewish culture in all its beauty and nobility, even in the ghetto. Ironically, the artist’s distance from religious Jewish life may have been precisely what made him such a sensitive observer of that world. 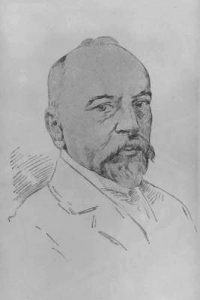