Solomon Maimon’s translation of his role model’s Guide for the Perplexed lies at the heart of his autobiography, attesting to his stubborn quest for knowledge above all / Elka Weber 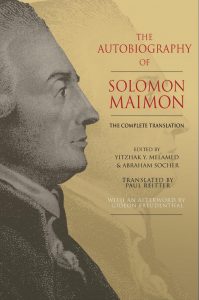 The Autobiography of Solomon Maimon: The Complete Translation

The Autobiography of Solomon Maimon, published in German in 1792–3, is the memoir of a man both compelling and unlikeable, an itinerant scholar who abandons his Jewish faith (along with his wife and children) in search of truth. The author is always positive he’s right. His trenchant observations are often funny, wise, and even cruel.

Solomon was born in 1753 in the Polish-Lithuanian Commonwealth. From his youth, he felt far too grand for his circumstances. Like the child of paupers who imagines himself a prince, Solomon is sure he belongs elsewhere. He therefore shows little patience for the financial failures of his parents and grandparents (though eventually he becomes even poorer than they ever were).

Maimon receives a classical Jewish education, developing into a prodigy, and his memoir describes rabbinic law reasonably accurately for the non-Jewish readership at which it was aimed. 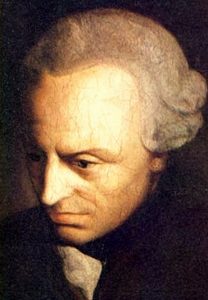 Solomon’s early secular education is sparse, but his quest for knowledge leads him to centers of learning and important intellectuals. At first, he stays within the world of Judaism. Drawn to the Maggid of Mezritch, he has left us the sole contemporary outsider’s view of this early Hasidic court of. Maimon soon concludes that “once you’d heard one of [the Maggid’s] interpretations, you heard nothing new from the rest […] I found the combination of cynicism and extreme cheerfulness off-putting, and I began to dislike the sect intensely” (p. 97). The final straw was when one of the Hasidim had a daughter, and the Maggid responded, “A daughter! Whip him” (ibid.). The Hasidim complied. Solomon wryly reports that the whipping “put everyone – except the victim – in a good mood” (ibid.)

While still a young man, Maimon leaves home to pursue an education in medicine and philosophy. (Years will pass before he begrudgingly grants his wife a divorce.) He has no money but prefers to starve and dress in rags as a philosopher rather than earn a living. Some teachers recognize his genius, and he occasionally finds short-term benefactors. 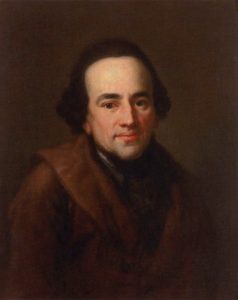 Solomon studies with Moses Mendelssohn (and admits, with uncharacteristic humility, that he should have treated the older man with more respect). He sends Immanuel Kant a commentary on the latter’s Critique of Pure Reason, and the philosopher replies that Solomon’s writing “betrays no small gift for the most penetrating thought” (p. 232).

Identifying with Maimonides, Solomon adopts the surname Maimon and even places a baffling ten-chapter summary of the Guide to the Perplexed right in the middle of his memoir. Unlike earlier translations of Solomon’s autobiography, this one includes the synopsis. Solomon uses his experiences to demonstrate his ascent from darkness to enlightenment, from faith to reason. Philosophy is thus no digression, but an integral part of his growth and development.

Solomon’s memoir has been enormously influential, captivating the likes of George Eliot, Hannah Arendt, Gershom Scholem, and Leo Strauss. Chaim Potok wrote his doctoral dissertation on Maimon, on whom he modeled the troubled protagonist of his novel The Chosen – a young Hasid struggling with his faith.

This new translation (complete with extremely helpful scholarly apparatus) retains not just the feel of Solomon’s uneven German, but also a sense of the book as a whole.

Entertaining as well as philosophically insightful – a unique combination –The Autobiography of Solomon Maimon offers a rich portrait of a conflicted, difficult man groping his way to the truth. 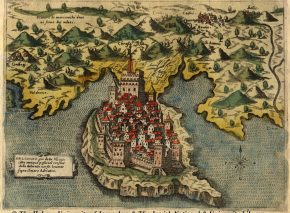