The Samaritans believe they’re the true people of Israel, and that their beliefs and customs reflect authentic Jewish practices. How do they differ from standard Judaism? A few points to clear up the confusion || Ze’ev H. Erlich

According to biblical tradition, when the northern Kingdom of Israel (also known as the Kingdom of Samaria, after its capital) was destroyed around the year 700 BCE, the king of Assyria exiled the ten tribes inhabiting the area, and settled other exiles in their place: “And the king of Assyria brought men from Babylonia, and from Cuthah, and from Ava, and from Hamath, and from Sepharvaim, and settled them in the cities of Samaria instead of the Children of Israel” (II Kings 17:24). According to this account, a priest from the Israelite community-in-exile was brought in to teach the new population “the laws of the Lord of the land” (ibid. 17:27)

Although the Bible lists these “new immigrants” beginning with the contingent from Babylonia, the talmudic sages defined the second group, from Cuthah (today southeastern Iraq), as the representative one, and accordingly termed all the new inhabitants “Cuthites.” Living in the environs of the abandoned Israelite capital of Samaria, they were also known as Samaritans. For nearly a thousand years, until the time of Rabbi Abbahu (the leading rabbinical luminary in Caesarea), their conversion to Judaism was considered questionable. The authorities could not decide whether the Cuthite-Samaritans had truly joined the Jewish people or were merely paying lip service to the traditions of the previous inhabitants of the land – for fear of the lions that had attacked them on arrival – while continuing their idolatrous practices in secret. The latter opinion prevailed, although both the Bible and rabbinic literature record intermarriages between these “foreign,” non-Jewish Samaritans and neighboring Judean Jewish communities. 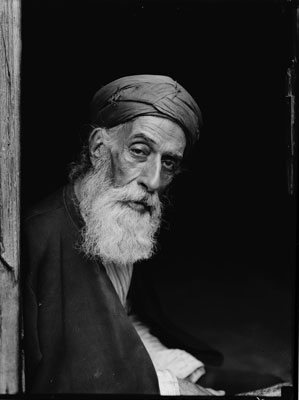 A Samaritan high priest at the beginning of the 20th century

The Samaritans, for their part, consider themselves an integral part of the Jewish people. We endured the Egyptian exile as one people, followed Moses through the desert together, and together conquered the land of Canaan under Joshua’s leadership. The Samaritans claim to be descended from the tribes of Joseph (Ephraim and Manasseh) and define their priests as descendants of the original Levites. Until about fifty years ago, one Samaritan family could trace its lineage as far back as the tribe of Bimim – as the Samaritans pronounce the name Benjamin. They maintain that the Jews are originally from the tribe of Judah (apart from the priests and Levites, who come from the tribe of Levi), implying that the Jews are the descendants of exiles from the southern kingdom of Judea, while they themselves are remnants of the northern Israelite kingdom.

The New Testament story of the Good Samaritan reflects the tensions between rabbinic Judaism, Christianity, and Samaritanism, which vied with each other in Judea during the first centuries of the Common Era. A wounded man is ignored first by a priest, then by a Levite, but cared for by a Samaritan. Jesus enjoins his disciples to emulate the Samaritan, implicitly rebuking the Jews. 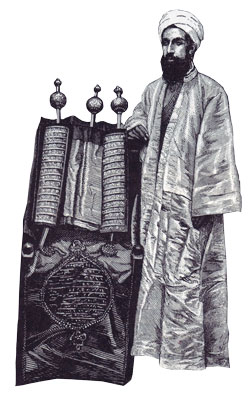 A late-19th-century high priest with a Samaritan Torah scroll. From Through Samaria to Galilee and the Jordan by Josias Leslie Porter, London, 1889

The Samaritan faith is based on five precepts:

On Mount Gerizim, the sites of the following are sacred: the altars supposedly built by Adam, Noah, and Abraham; the Binding of Isaac and the thicket where the ram offered in his place was trapped; and the twelve stones erected by Joshua. Each site must be visited in the pilgrimages to the mountaintop held at the end of the Festival of Matza and on Shavuot and Sukkot.

The Samaritans also honor the ancient gravesites of their ancestors: the Cave of Machpelah in Hebron; Rachel’s tomb, in Bethlehem; Joseph’s, on the outskirts of Nablus; Aaron’s, above Petra; and the graves of priests and elders in the village of Awarta, near Nablus, traditionally identified as the Hill of Phineas. 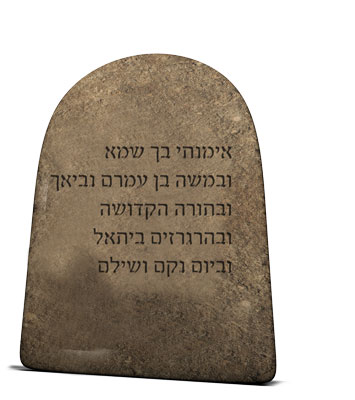 Similar But Different ‑ The Samaritan Calendar

Like the Jews, the Samaritans observe five biblical festivals. For the Samaritans, these comprise seven days on which labor is forbidden:

Shavuot, which always falls on a Sunday, in accordance with the literal meaning of the biblical description of this holiday as taking place “the day after the Sabbath” (Leviticus 23:15). This is also a day of pilgrimage.

The Day of Remembrance, known by Jews as Rosh Hashana, lasts only one day, as stated in the Bible.

Yom Kippur, which is universally observed by all members of the community, including children. Only nursing infants are excused, although their mothers must fast.

Sukkot, perhaps the most colorful of Samaritan pilgrimage festivals, with work forbidden on the first and eighth days. The sukka is built inside the house, and its ceiling lavishly decorated with four species of fruit.

The Samaritan calendar is a hybrid, combining a lunar year of twelve months (each twenty-nine to thirty days long, adding up to 354 days) with a solar year calculated on a seasonal basis. The Festival of Matza always falls in the spring, as the Bible says of Pesach: “Observe the month of the spring” (Deuteronomy 16:1). Like the Jews, the Samaritans insert a “leap month” every few years. Some years, Jews and Samaritans celebrate Passover eve together, sometimes the Samaritans can be a day or two earlier, and when a leap month puts the two calendars out of sync, the respective festivals can be a month apart. 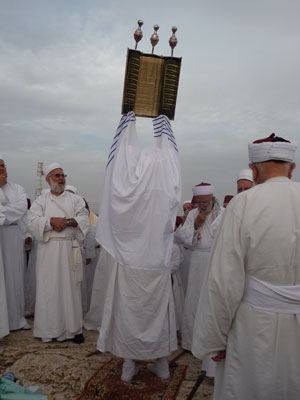 A Samaritan Torah scroll is raised on high during the thrice-yearly pilgrimage around the six holy sites of Mount Gerizim. Although all members of the community attend, men and women walk separately

The Samaritan year is divided into two. “Before” is before the paschal sacrifice and belongs to the preceding year; “after” belongs to the new one. In the moment of transition from one year to the next, every Samaritan plumbs the depths of his or her soul and makes a final reckoning of the year just passed: where was I at last year’s paschal sacrifice, and where am I now? A moment after the lambs are slaughtered, everyone crowds around the high priest, kissing his hand and then both his cheeks, in Middle Eastern fashion. Happiness engulfs the entire community.

Yet one man stands apart. A psychological gulf, far wider than the few meters dividing him from the reveling crowd, keeps Baruch Tzedaka away from the rest. His wife stands nearby, close but not too close. She, who knows him best of all, understands that he needs to be alone.

He takes stock of what he used to have and what is his no more. He had a daughter, one of four: beautiful, intelligent, popular, and successful. Famous, even. Then she fell in love with a Jewish boy, converted to Judaism and had to abandon the Samaritan community, snapping a family chain that went back125 generations. She had a daughter, got divorced. But there was no way back – it was too late. Then, one by one, her three sisters left too, abandoning the religion, the faith, and the rituals. He had had four daughters – and not one had remained in the fold. He knew the meaning of his neighbors’ pitying glances. “It was your upbringing. That’s what did it. It’s your own fault.”

He still feels as though he belongs, but the sense of alienation hurts, the chilliness that even his relatives display bites keenly. He is a stranger among his own people. First he lost his daughters, the lights of his life. Then, in another bitter twist of fate, he lost his eyesight. What remains?

His muted cry of prayer rises fleeting on the wind. 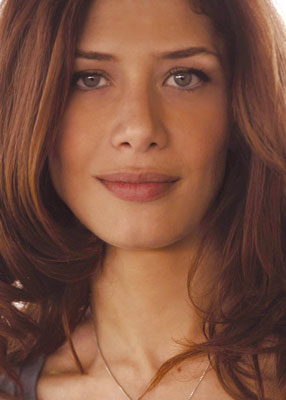 The Samaritan community numbers only some seven hundred people. Excluding young children, adolescents, and adults who are already married, the remaining marriageable Samaritans are even fewer, leaving little room for choice.

They all know each other. This one is a neighbor, that one lives two houses down from the other one’s brother; this one was a classmate, that one’s cousin is married to this one’s brother-in-law, ad infinitum.

They see each other often at the main community events: the paschal sacrifice and pilgrimage festivals, circumcisions, “signings of the Torah” (which Jews call a bar mitzva), weddings, and so on.

The Samaritans are not like the Muslims, or ultra-Orthodox Jews – the sexes are not totally separated. They can talk, they meet. There are limits, but they can be overcome. Yet there are social conventions, traditions, and customs to abide by as well.

The long hours whiled away during the paschal sacrifice provide golden opportunities – to propose to her, to whisper in his ear…

“Dad, I’ve been thinking about this girl”; “Grandma, maybe this guy is right for me.” The answers hiss sibilantly – “Maybe…I looked into it a little…let’s wait and see”– in hushed tones, when the timing is just right: Pesach eve. 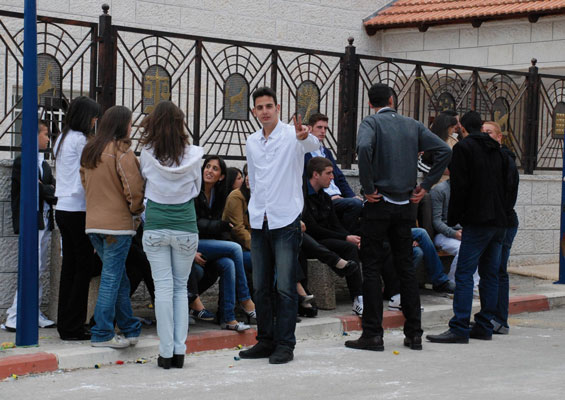 Find the difference: below, a betrothed young Samaritan couple at the beginning of the 19th century; above, Samaritan adolescents use “downtime” during the sacrifice to socialize 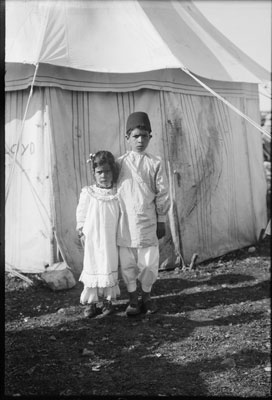 The Fire of Faith