Locking Horns at the Battle of Hattin

Muslims vs. Christians
The First Jihad in Zion
Taking the Bait
No Mercy
By: Tamar Hayardeni

The Crusaders lost the Battle of Hattin not because they were fewer, weaker, or less fierce than Saladin’s army. Ill-prepared for the climate and terrain, they were just too thirsty to fight

The Battle of Hattin, fought between Crusader knights and Saracens under the leadership of Saladin in 1187, is one of the most famous in the history of the Holy Land. For once, in the conflict between Christian Crusaders and Muslim Ayyubids, no one could blame the Jews. So in revisiting this battle, whose side would you take?

Since Roman times – apart from a brief Persian interlude – there’s been little variety in the history of the Promised Land. Byzantine Christian rulers were replaced by Ayyubid Muslims, who were displaced by Crusader Christians, only to be ousted in favor of a different Muslim dynasty. Eventually some British Christians turned up, and we appear only near the end of the line. For a short time in these sixteen hundred years of ping-pong, control of the Holy Land hung in the balance between Christians and Muslims. That’s when the Battle of Hattin took place. 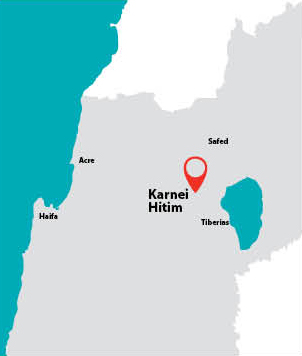 The First Jihad in Zion

In 1187, Saladin decided to make history and wipe the almost-century-old Crusader kingdom off the map once and for all. Until then the Saracens had generally avoided confrontation with the invaders, whose military prowess was legendary, and who’d developed an uncanny ability to hole up in high-walled Middle Eastern fortresses and withstand any and every siege. Long-term peace treaties had been made and honored, but now Crusader rule was weakening, and succession struggles for the coveted throne of Jerusalem made the Christians vulnerable.

Unable to control his unruly knights, King Guy of Lusignan found his authority wavering. The biggest thorn in his side was Reynold of Châtillon, a headstrong, wayward upstart who’d attained his wealth and position as prince of Oultrejourdain (Transjordan) through marriage to some well-connected widows. Infamous for his wanton cruelty and complete disregard for politics, Reynold launched murderous attacks on caravans of Muslim pilgrims on their way to Mecca and pirated ships up and down the Red Sea coast. Ignoring the truce signed by the king, and his repeated requests that Reynold compensate his Muslim victims, the prince attempted to conquer Mecca and Medina. This aggression was too much for Saladin, and the Kurdish ruler whose realm extended from Egypt to Syria began plotting revenge.

The plan to destroy the Crusader kingdom and punish Reynold required careful logistics. Just as the Crusaders before him had enlisted Europe’s religious zeal in order to swell their ranks, Saladin recruited volunteers from all over the Middle East for his campaign against the Christian infidel. This jihad was apparently the Holy Land’s first, and ten thousand horsemen and as many foot soldiers and attendants answered Saladin’s call to conquer or die. The strategy was simple but elegant: the Muslims would lure the Crusaders out of their impregnable castles and pounce on them in the open fields, where the Saracens’ lighter armor and swift Arabian steeds could be put to full advantage.

The first stage was a lightning raid by Saladin’s huge army early in 1187, which descended upon Reynold’s fields beyond the Jordan like a plague of locusts, carrying off the produce and destroying everything else within reach. Reynold fumed, but he recognized the ruse and resisted the temptation to stray beyond his fortifications.

Momentarily off balance, Saladin nevertheless managed to make out that he’d won a great victory against the “cowering Christian,” and volunteer regiments flocked to his banner from Syria and Egypt.

For three full months the Muslims ravaged Reynold’s territory, after which they besieged Tiberias. Once Saladin’s soldiers had conquered the city, opening the Holy Land to invasion, the entire Crusader kingdom was in turmoil.

At the beginning of July the Crusader leadership – the king, his knights, and the choicest captains of his army – convened an urgent council of war in the fortress at Zippori. In just three days, twelve hundred fully equipped knights gathered. Hardly a Crusader warrior was missing from the battle-thirsty crowd jostling among the clanking armor, war horses, and mighty swords within the castle walls. Another ten thousand foot soldiers and numerous mounted archers and lancers joined them. Despite Saladin’s call to jihad, his untrained mob of volunteers seemingly didn’t stand a chance.

In the Holy Land, however, the many don’t always defeat the few, nor do the strong necessarily prevail over the weak. And in hindsight, the Crusaders would have been better off behind the thick walls of Zippori. They had an excellent water supply from the nearby springs, and a good forty kilometers of tramping through the summer heat – without a single water source on the way – separated them from Saladin and his men.

More than once, the Crusaders had seen what happened when a rabid Muslim rabble had to while away its time playing backgammon at the foot of towering castle walls. After a few weeks of boredom, these would-be avengers drifted away. All the Christians needed was a little patience. But they were nervy, and Reynold – who’d snuck out of his fortress to join the war cabinet in Zippori – may have egged the Crusaders on. So they set out to liberate Tiberias and teach the Muslims a lesson they wouldn’t forget.

No one knows exactly what happened next – what route the Crusaders took, and how soon the fleet-footed Muslim horsemen began snapping at their heels. One thing is clear: on the blazing afternoon of July 3, eighteen kilometers from Zippori (and about the same distance from Tiberias), the knights realized they were in trouble. They were out of water, their parched horses were skittish and disobedient, and Muslim archers were picking off one warrior after another.

Abandoning the fast track to Tiberias, the Crusaders turned north toward the springs and water holes near the village of Hattin, eight kilometers ahead. The Saracens turned the screws by mercilessly cutting down any laggards. By nightfall, still without a drop of water, the thirsty Christian soldiers had to halt. Meanwhile the Muslims enjoyed themselves in the nearby springs, sharpening their swords for morning. 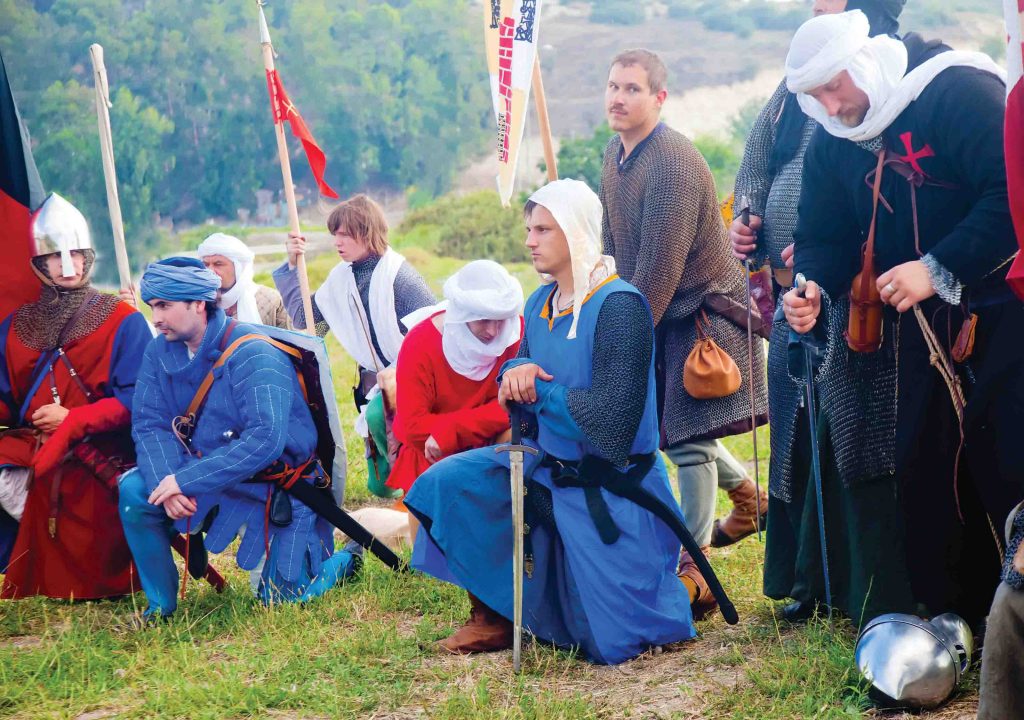 Reenacting historic battles is a fast-growing hobby in Israel. Every summer, actors divided into Crusaders knights and Saracen soldiers recreate the Battle of Hattin. “Crusaders” kneel in prayer before going out to war, Zippori, 2014

We’ll spare you the gory details, but the battle was nasty. Suffice it to say that the Crusaders managed to advance a few kilometers closer to water at daybreak, before they were blocked at the foot of the Horns of Hattin, an extinct volcano named for the two horns at its peak. Having beaten their foes to the slopes above, the Saracens gamely set fire to the surrounding fields, so the dehydrated knights in their heavy armor almost suffocated in the stifling heat and smoke. The army began disintegrating, and not even the king could persuade his scattered soldiers to turn back and protect the horses from the Saracens’ hail of arrows. Though the knights fought bravely by the northern horn, they hadn’t a prayer.

The Crusader army that took part in the battle was basically wiped out, and with it most of the senior nobles who’d been running the kingdom. Those knights who surrendered out of exhaustion and thirst were either executed immediately or, if they were lucky, sold on the Damascus slave market. King Guy was taken captive but ransomed in a prisoner exchange a year or so later. Reynold of Châtillon’s fate was rather less pleasant; he was singled out for Islamic State–style treatment by Saladin, who cheerfully cut off his head.

Since men had been recruited from all over the kingdom for the crucial battle, their defeat left the Crusader territories undefended, with one fortress after another falling into Saladin’s hands like ripe fruit. Within three months, jihad accomplished, he marched triumphantly into Jerusalem at the head of his army. Of course that set off another European Crusade, but though this one managed to conquer much of the coast, the fallen Kingdom of Jerusalem was never truly restored. Almost a century later, in 1291, the last Crusader was driven from the Holy Land, and it remained in Muslim hands for hundreds of years.

Today the green slopes of the Horns of Hattin betray not a hint of the bloody drama that unfolded here. Visitors to the national park established in the area in October 2007 have to put their imaginations into overdrive to connect the pastoral vistas with the cruel destruction of the Crusader kingdom.

To really understand what happened, particularly if you have a thing for sweaty knights in full armor, your best bet is the international knights’ festival every summer at the Horns of Hattin. It includes a full reenactment of the historic battle, but don’t worry – there’s no ketchup to be seen anywhere, and the proceedings never quite get to the story’s tragic end. 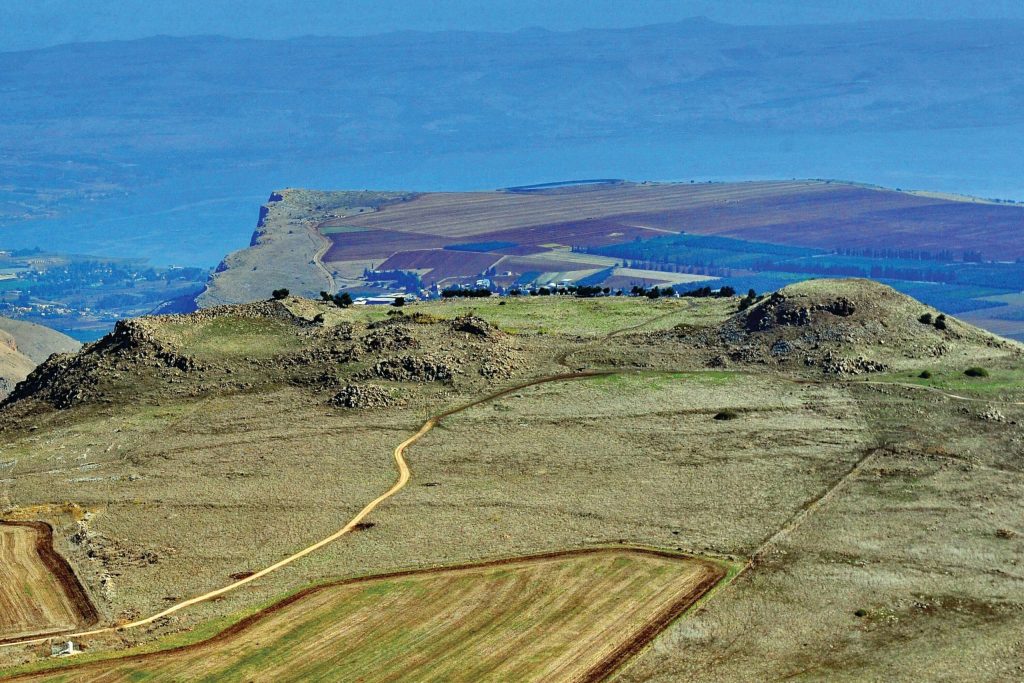