Roadworks improving access to Israel’s capital have just uncovered the remains of another, previously unknown city.  The site lies beside highway #1 near Motza, some 5KM west of Jerusalem. The find was a major surprise, as it had been previously assumed that no Neolithic metropolis existed outside Asia Minor.

The estimated number of inhabitants of this nine-thousand year old site is over two thousand, making it one of the largest such settlements in the world. According to Drs. Hamoudi Khalaily and Kobi Vardi of the Israel Antiquities Authority (IAA), Judea was thought to have contained only small villages at this time, but the remains of living quarters, public areas, storehouses and ritual concentrated here suggest otherwise. So too do the alleyways between the structures, which are not so different from the streets of later cities, and whose creation and maintenance required a certain amount of town-planning.

The artifacts discovered included flint arrow-heads and axes, evidence that the occupants were hunters, but also sickle blades and a large amount of legumes, particularly lentil seeds, suggesting they farmed as well. Obsidian vessels originating from Anatolia demonstrate that even in this early period there were already international trading connections. All this was found less than a meter below the surface.

A tomb discovered on site, but dated five thousand years later, to the second millennium BCE, contained the remains of two males. Beside them were placed a dagger and a spearhead, and outside the grave the complete skeleton of an ass was unearthed, presumably intended to bear the warriors’ burdens in the world to come. Various ornaments, including stone bracelets so small they must have been worn by children, and mother-of-pearl pendants and bracelets, were also among the artifacts.

Three dimensional imaging was used to allow research of the site to continue even after work has resumed on the bypass connecting Jerusalem’s western exit to Route 1, and meanwhile the Israel’s National Transport Infrastructure company (Netivei Yisrael) has promised to minimize damage to its archaeological treasures. The IAA plans to use the 3-D images to create virtual models, allowing the public virtual access to the ancient town, even if in the long term it may never be possible to visit. 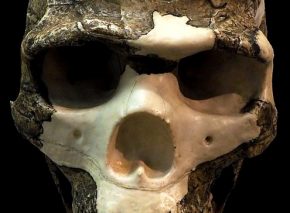