Immigrants arriving in Manhattan were subjected to medical checks and comprehensive
questioning, and sometimes detained for weeks before being admitted to the United States

Between 1824 and 1924, thirty-four million Europeans immigrated to the United States, including some three million Jews. In the 19th century, this journey took several months; families traveled on foot and by carriage and train toward their port of embarkation. Russian subjects smuggled themselves across the Russian border (because it was illegal for them to leave the czarist empire). The immigrants then had to make their way through Germany to one of Europe’s growing ports on the Atlantic, usually Bremen or Hamburg. There they bought ship tickets and embarked, spending an average of twenty-one days sailing to North or South America.

By the early 20th century, improved railway transportation and steamship travel had shortened this journey to less than a month. Increased state regulation of migration created new obstacles, however. Until 1887, arrivals were processed at Castle Garden, a fort off the tip of Manhattan Island. After an investigative committee recommended that immigration regulation be turned over to the federal government, Ellis Island was opened in January 1892 to process all newcomers arriving in the United States by steerage class. At Ellis Island, they underwent a cursory physical. If the doctors saw anything indicating a possible contagious disease or physical or mental handicap, the migrant’s shoulder was marked with chalk for further examination. If he failed the exam, and the government feared he would become a burden on the public purse, he could be deported. 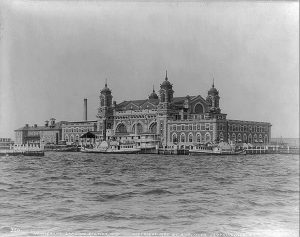 The grand facade of the Ellis Island immigration facility belied the wearisome bureaucracy within. Photo from 1905

Migrants were also questioned concerning their ability to read and write, their final destinations, their assets, their political affiliations, and any family members in the United States. About twenty percent of arrivals were held for further questioning. It could take two weeks to decide such cases. In the interim, these aspiring immigrants were housed in extremely crowded conditions, although they were fed and given medical care.