Painting as Oxygen
Divide and Paint
By: Naomi Samuel

British prime minister Winston Churchill is famed for his inspiring speeches and historical works. But he was also an exceptional artist. Churchill’s Jerusalem 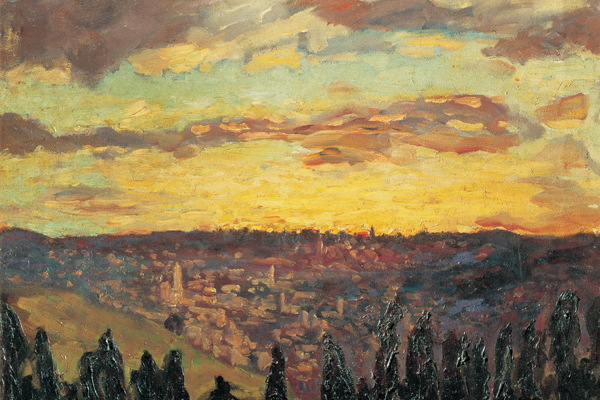 Best known as the British prime minister who defeated Hitler, Sir Winston Leonard Spencer-Churchill is famed for his inspiring speeches (“I have nothing to offer but blood, toil, tears, and sweat”) and historical works. But he was also an exceptional artist. For Churchill, painting was more than a hobby; it was oxygen.

Happy are the painters, for they shall never be lonely: light and colour; peace and hope will keep them company to the end of the day. (Winston Churchill, Painting as a Pastime [McGraw-Hill, 1950], p. 13)

Having resigned from government in 1915 after being blamed for the debacle of the Allied retreat from Gallipoli during World War I, Churchill was at his lowest ebb. Visiting his brother, he came across his sister-in-law painting in the garden and accepted her offer to try his hand. It was love at first sight.

Churchill painted mainly landscapes and sea scenes, usually in oils. Neighbors Sir John and Hazel Lavery, both prominent artists, advised him, and painter friend Walter Richard Sickert helped him overcome his lack of formal training, especially in portraiture. Sickert taught Winston how to convey proportionality and to use photographs to continue a work in progress.

The results were impressive. Churchill first exhibited in Paris, in 1919 and 1921, under the pseudonym Charles Morin. And two of his paintings, attributed to “David Winter,” were accepted by London’s Royal Academy of Arts in the late 1940s as part of its permanent collection.

Like statesmanship, painting required Churchill’s intense concentration, subsuming a web of intricate details into a single, fixed purpose. Art provided the perfect retreat from the stress of politics.

Churchill completed close to six hundred works, mostly in England and France. Only one was painted in Jerusalem, during a short break after the frenzied Cairo meetings pursuant to the Sykes-Picot Agreement of 1921, which divided the Middle East among the colonial powers. As usual, he had his easel with him.

A lifelong pro-Zionist and admirer of the fledgling Jewish communities in the Holy Land, Churchill spent much of his stay in Jerusalem painting the magnificent vistas, including this view from Mount Scopus. The elaborate dusky skies and crimson sunset lend the roofs a peculiar tranquility, projecting the inner peace of the artist at work.