An artist is more popular with the public than with critics and peers: meet Ludwig Blum | Naomi Samuel

Often an artist is more popular with the public than with critics and peers. Ludwig Blum was one such. Born in Moravia (now the Czech Republic) to an Orthodox Jewish family, young Blum excelled at gymnastics and was active in the Maccabi sports club in Prague. In 1913, he was drafted into the Austrian army, serving in World War I. Blum began studying art only after the war, first in Prague and then throughout Europe. 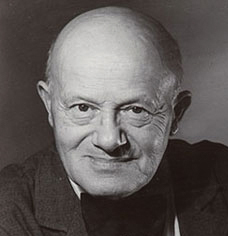 A fervent Zionist, Blum helped set up the World Maccabi movement after the signing of the Balfour Declaration. Settling in Jerusalem in 1923, he did his best to adapt to the local art scene, dominated by the Bezalel school and its fusion of Orientalist and Art Nouveau styles. Artists such as Reuben Rubin and Abel Pann were determined to create a unique Palestinian Jewish visual culture. Blum’s art, however, was deeply rooted in both Impressionism and Expressionism. His paintings of the Holy Land sold best in Europe. 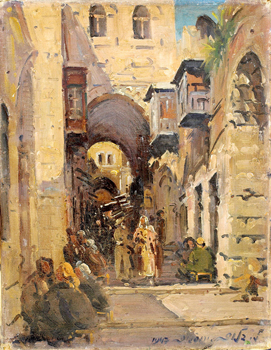 Blum’s works reflect his delight in the deceptively simple pleasure of seeing. One series, Land of Light and Promise, features exceptionally delicate panoramas of Jerusalem’s Old City as well as desert landscapes, depictions of rural life, street scenes, and holy sites throughout the Middle East. He became so famous for his lyrical renderings of the Holy City that he was sometimes dubbed “Painter of Jerusalem.”

His most ambitious work, nearly eight meters in width, was Jerusalem, View from the Mount of Olives. Commissioned in 1936 for the Museum of Biblical Antiquities in Blum’s native Brno, Czechoslovakia, the painting is currently housed in the Augustinian Abbey of St. Thomas there. A smaller version, “only” five meters wide, hangs in the President’s Residence in Jerusalem.

View from the Mount of Olives, oil on canvas, 1936/ Ludwig Blum

Jerusalem in Snow (1927) captures the Holy City in a singular way. Painted outdoors after a snowstorm, this clean, white landscape exploits snow’s tendency to blur distinctions. Many artists have portrayed the Old City, but almost none in snow. Blum’s unrelenting artist’s eye and sense of poetry here create one of his most extraordinary images. The city seems to float above an alien world, barely tethered to the rest of the country. That splendid isolation sums up a great deal about Jerusalem. 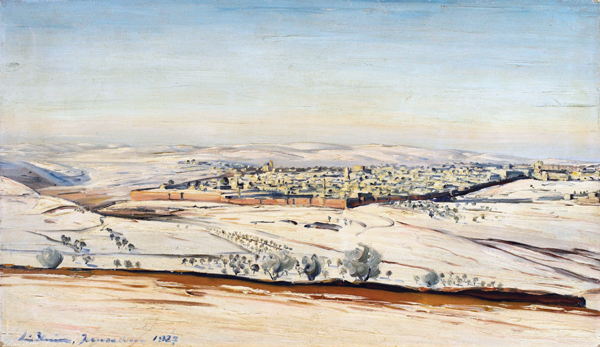 Blum and his family became part of Jerusalem society, and his son Eli fought in the first Palmah unit. He was tragically killed in a 1946 sabotage operation while blowing up a bridge in the Galilee, one of eleven targeted that night. After his son’s death, the artist painted soldiers, battlefields, and the ravages of war almost obsessively.

Blum remained in the capital throughout the War of Independence, although his studio in the Talitha Kumi building on Ben Yehuda Street was heavily damaged in the Jordanian bombing of Jerusalem. Continuing to live and paint in the city after the establishment of the State of Israel, he was appointed a Jerusalem Fellow in 1968. 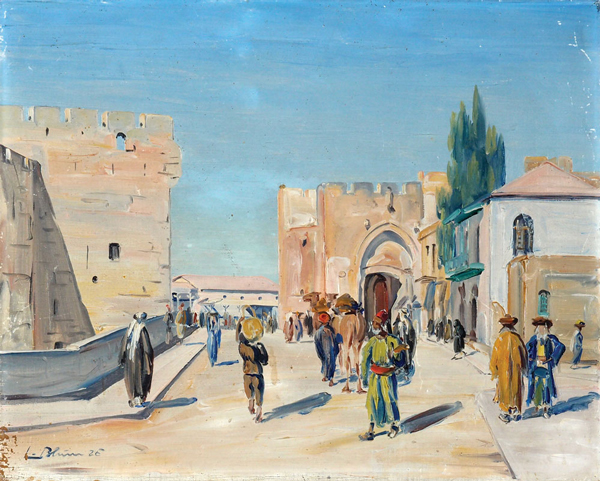