Megilla with a Secular Twist

The Megilla’s Darker Side
Barred from the Stage
By: Yair Lipshitz

Itzik Manger was born in 1901 in Czernowitz, although one version of the biography he invented for himself claimed that his tailor father had migrated from Romania, and that he himself had been born in Berlin. In 1928, he moved to Warsaw, where he developed a unique style as a Yiddish poet and achieved a reputation, among other things, for his Bible Ditties (Humash-Lieder) and Megilla Ditties (Megilla-Lieder), published in 1935 and 1936, respectively. During the war he fled to London, and from there he moved to the United States. He immigrated to Israel in 1966 and died three years later, in Gedera.

Manger’s treatment of biblical themes – the book of Esther in particular – was unique. The old stories took on new life as he molded them into multi-voiced, secular, modernistic works. Downplaying the usual protagonists, Manger adopted the narrative viewpoints of those characters who were rejected, or suffering. In the Humash-Lieder, we hear from Esau and Hagar, and from bitter, barren Sarah; we watch Leah, weeping over her proposed marriage to Esau. In Megilla Ditties, Vashti’s tragic fall from grace and Esther’s loneliness in the king’s palace tug at our heartstrings.

Manger adds a character to the Megilla: young Pastrigosso, a tailor’s apprentice. Pastrigosso is in love with Esther, and when she is taken to the palace, he attempts to assassinate King Ahasuerus. This ostensibly minor figure allows Manger to introduce the world of the proletariat into the story, developing a cast of lower-class characters who would otherwise be absent. Pastrigosso’s peers are depicted as secular, political revolutionaries who refuse to be satisfied with the traditional religious tactics of fasting and prayer, and instead demand the use of force against their enemies: “No, no, and no, our master!” they say to the old tailor, Ponefta. “It is not for us to fast! And as for the murderers – should they come – their bones will break at last!” (Megilla Ditties [Am Oved and Hargol, 2010], p. 104 [Hebrew]).

In keeping with the Pastrigosso narrative, Megilla Ditties concludes on a dark, discordant note: the traditional scene of the Jews’ celebration of Haman’s downfall is replaced with the bitter wails of Pastrigosso’s elderly mother. Her son has been executed, and she curses Esther and Mordecai for their callousness; as far as she is concerned, they are the only ones who have gained anything from the whole affair:

A pity that the bitch
Lies not in the grave in his place.
Not once, while he was in jail,
Did she offer to plead his case.

The main thing is that she’s celebrating…May her Purim lights turn dark –
For her and her uncle Mordecai,
The rich lobbyist, the brightest bright spark. (ibid., p. 120)

Throughout Megilla Ditties, Manger conducts an explicit dialogue with the Purim spiel tradition. The poems are presented as an old-time Purim play, while the characters themselves occasionally relate to the Purim spiel players who portray them. The characterization draws extensively on the traditional Purim spiel: Vashti attributes her refusal to attend the king to a toothache; Mordecai the political lobbyist is depicted as a short, hunchbacked peddler. In a particularly dark sequence, Mordecai waits for Satan, whom he has previously engaged to push Haman onto Esther’s couch at the decisive moment. The Talmud also describes an agent pushing Haman into his ultimately incriminating move, but Manger’s decision to make that agent Satan, rather than an angel, casts the events described in Megilla Ditties in a particularly unsavory light. 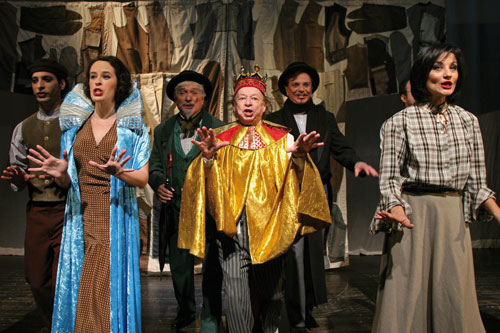 Barred from the Stage

Although Manger’s text was intended to be read rather than dramatized, it was staged in 1965 at the Hamam Club in Jaffa. The performance was produced by Shmuel Bunim, and Manger’s words were set to music composed by Dubi Zeltzer. The cast included three members of the Burstein family – Pesach and his wife, Lilian Lux, and their son Motele (Mike).

The performance marked the end of two decades during which Yiddish theater had been marginalized within Israeli culture. In 1949, Yiddish performances by local troupes were banned from the Israeli stage – only artists from abroad were permitted to perform in Yiddish. David Ben-Gurion modified the ban, but during the 1950s, Israeli actors performing in Yiddish were still fined. A Yiddish performance of Megilla Ditties at the Hamam Club, then managed by Haim Hefer and Dan Ben-Amotz – central figures in Israeli culture – was therefore something of a landmark. The play was an enormous success, and the run continued for over three hundred performances.

In 2010, a bilingual edition of Megilla Ditties came out in Israel, translated into Hebrew, edited, and published by David Asaf. The illustrated edition includes a CD of the songs from the Hamam Theater performance. Publications such as this illustrate the renewed interest in Yiddish language and tradition, with its peculiar mix of secular and traditional culture, that is sweeping Israel today. 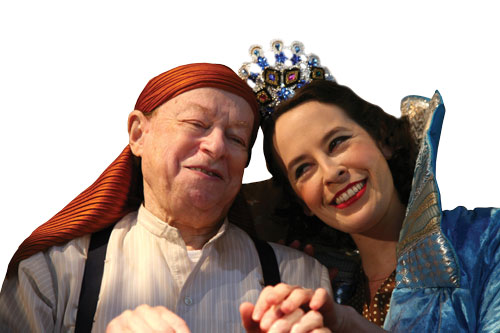