Rooting the Rebbe’s far-reaching campaigns directly in the Baal Shem Tov’s ideology, Wexler explains why Schneerson’s vision was best suited to and carried out from the land of the free // Sara Jo Ben Zvi 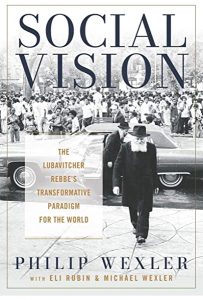 The Lubavitcher Rebbe’s Transformative Paradigm for the World

In this extremely erudite and fascinating book, Philip Wexler, an emeritus professor of sociology and education at Rochester University and the Hebrew University of Jerusalem, examines both the philosophy behind the activities of the seventh and last leader of Chabad Hasidism and how the goals he set for himself and his followers impacted his career.

Social Vision posits a deep affinity between Rabbi Menachem Mendel Schneerson and the U.S. after the Allied victory in World War II left it the acknowledged leader of the free world. Wexler begins by describing the “emotional trap” of the Protestant work ethic, to which many attribute America’s prosperity. The dread of economic failure as a sign of exclusion from God’s “elect” creates both an overriding determination to overcome obstacles and an obsession with the worth of the individual – as opposed to family and community. The author then presents the Rebbe not only as the embodiment of German sociologist Max Weber’s vision of charismatic leadership but as an antidote to the alienation generated by this ethos of thrift and industry. Schneerson’s depiction of God’s immanence in every aspect of creation and society is a source of immense joy, love, and brotherhood in which no one – Jew or non-Jew – is left behind.

After demonstrating how deeply the teachings of Rabbi Israel Baal Shem Tov, iconic founder of Hasidism, were etched in every step of Schneerson’s career, Wexler shows that the Rebbe’s lifework was essentially a back-to-basics, grassroots movement. Collecting the broken remnants of Jewish communities destroyed in Europeand seeking refuge in America, he rebuilt them and their faith from the bottom up. Arriving in New York in 1940 as a fugitive from Paris, Schneerson quickly understood the American fixation on progress. He thus addressed the youth of his new homeland, not the elders. Promoting authentic Judaism rather than watering it down to suit an American lifestyle, the Rebbe spoke of transforming the world just as the beatnik revolution was getting under way.

Wexler points to greenhorn Schneerson’s uncanny grasp of the U.S. as a global trendsetter inasmuch as it was the only major political player whose postwar economy was intact. The Rebbe had his finger on the American pulse, sensing even the growth of “girl power.” Prefiguring women’s lib, he harnessed women and girls as agents of change in everything from candle lighting to conferences. As the Rebbe remarked (in Yiddish):

In America it is customary that the attitude regarding education is mainly determined by “the mainstay of the home” (Psalms 113:9), that is, the wife and the mother. Now, America is the nation to which the eyes of all are raised, since it is from here that both financial and spiritual resources are disseminated. Accordingly, the way that educational policy is to be established here, especially among Jews, will constitute a model for the education of young people wherever they live, including the Land of Israel. […] The nature of the world today is such that the nation that is the source of financial resources has the ability to be the opinion leader of greatest authority. (p. 58)

For Wexler, it’s crystal clear why the Rebbe based his global mission in America – a country founded by God-fearing colonists seeking freedom of worship – rather than in the fledgling State of Israel with its secular, even anti-religious leadership.

Schneerson merged Chabad’s own history of religious persecution, followed by refuge and flourishing in America […], with the national-origin story of the United States. On this basis, he charted a vision for the collective mission of the nation in direct parallel with Chabad’s own mission. […]

Here we have a vision of America […] as an exporter of refuge, a nation that is duty-bound by God to wield its power “via pleasant means,” thereby bringing charity and justice to those who need it, wherever they might be. Schneerson makes it clear that […] he meant “quiet diplomacy,” warning that “noise and propaganda” lead to “opposition and stubbornness.” (pp. 65–6)

Were Wexler not an avowed Chabadnik, he might have questioned the ease with which the Rebbe reformulated Chabad’s mission to dovetail with central aspects of the American ethos. It’s arguably tempting for a transplanted movement to adopt the mores of the dominant society. However, the sociologist does point out that Hasidic life contradicts the most basic tenet underpinning Western society, particularly in the United States: individualism.

Chabad’s emphasis on community tempers America’s excess individualism. Wexler dwells on the open, interactive nature of Schneerson’s monthly farbrengen – his predecessors held such gatherings only three times a year – as an example of the movement’s freedom from hierarchy (despite the dominance of the rebbe). (Replacing the classic Sabbath sermon with a weekday farbrengen also allowed him to broadcast events to followers the world over; this shrewd harnessing of technology to “spread the word” – utilized concurrently by the American Christian revival movement with great success – may be the secret of Chabad’s metamorphosis into a global movement.) Especially telling is the author’s analysis of the Rebbe’s innovation of replacing the private audience with a momentary exchange of words and the gift of a dollar bill:

The significance of the dollar was also intended to underscore the fundamental reciprocity of the encounter; the recipient of Schneerson’s blessing came away with the ability and responsibility to bestow blessing upon a third party. The recipient was transformed into a giver, and thereby the Rebbe himself received the gift of impacting a wider circle beyond the single individual with whom he interacted in that moment. (p. 123)

Wexler’s last two chapters depict Schneerson as a force in American public affairs, focusing on the education system in general and non-denominational prayer in schools in particular, on the ecological value of solar energy, and on the ills of the American prison system and its “revolving door” syndrome. Though the Rebbe indeed took a stand on these issues, they were hardly among his core concerns, and their extensive treatment here feels somewhat labored. The book’s subtitle – The Lubavitcher Rebbe’s Transformative Paradigm for the World – reflects the author’s belief that the Rebbe aimed for universal influence, but it seems strange to prefer such relatively minor items on the Lubavitcher’s agenda over some of his greatest campaigns. Take the worldwide network of Chabad Houses, for example, staffed by the Rebbe’s tireless emissaries. Despite its undeniable global impact, Wexler devotes but one page to this project – and only in his epilogue.