God Save the Dutch Queen

Despite taking place on April Fools’ Day, a royal visit to Amsterdam’s Ashkenazic Great Synagogue was no joke. The event’s commemorative booklet emphasized the elegance and gravity of the occasion

On Februay 24, 1924, B. E. Asscher, chairman of Amsterdam’s Ashkenazic community, informed his fellow congregants that Queen Wilhelmina of Holland planned to visit the city’s Great Synagogue with her husband, Prince Heinrich of Mecklenburg, and their daughter, Juliana, on April 1. The gesture was intended to reinforce the queen’s good relations with Amsterdam’s Jews, who then constituted roughly 10 percent of the city’s population. Though this visit wasn’t Her Majesty’s first, it’s the only one whose preparations remain documented.

Only five weeks separated the official announcement of the impending royal visit, sent by the mayor of Amsterdam to Asscher, from the actual event. A commemorative brochure describing both was published afterward.

Rabbi Abraham Samson Onderwijzer was responsible for the program, in which cantor A. Stoutkzer recited the prayer for the queen and sang psalms accompanied by the synagogue choir (bolstered by an additional guest choir). Psalm 21, which begins “The King shall have joy,” was set to music by a Dutch Jewish composer for the occasion, and after this performance, both the synagogue president and the rabbi addressed the assembled.

With the mayor covering all costs, including security arrangements, the community wardens compiled a guest list. Aside from notices in the local and national press, written instructions were sent to synagogue members, requesting evening wear: top hats and tails for men and floor-length gowns for women. The synagogue carpeting, drapes, and tapestries were replaced, special covers were provided for benches, and flags and royal banners were hung.

The Torah scrolls were dressed in their finest wrappings and finials, and precious Judaica and manuscripts were on display in the sanctuary and on the reader’s platform. Two marble plaques were ordered, one listing the synagogue’s founders from 1670, the other the dates of previous royal visits. The second plaque stated:

Twenty-five years have passed since our lady, Her Majesty Queen Wilhelmina, ascended the throne. She graced this synagogue with a visit when it was renovated and upgraded in 1921 […], two hundred and fifty years after its establishment. 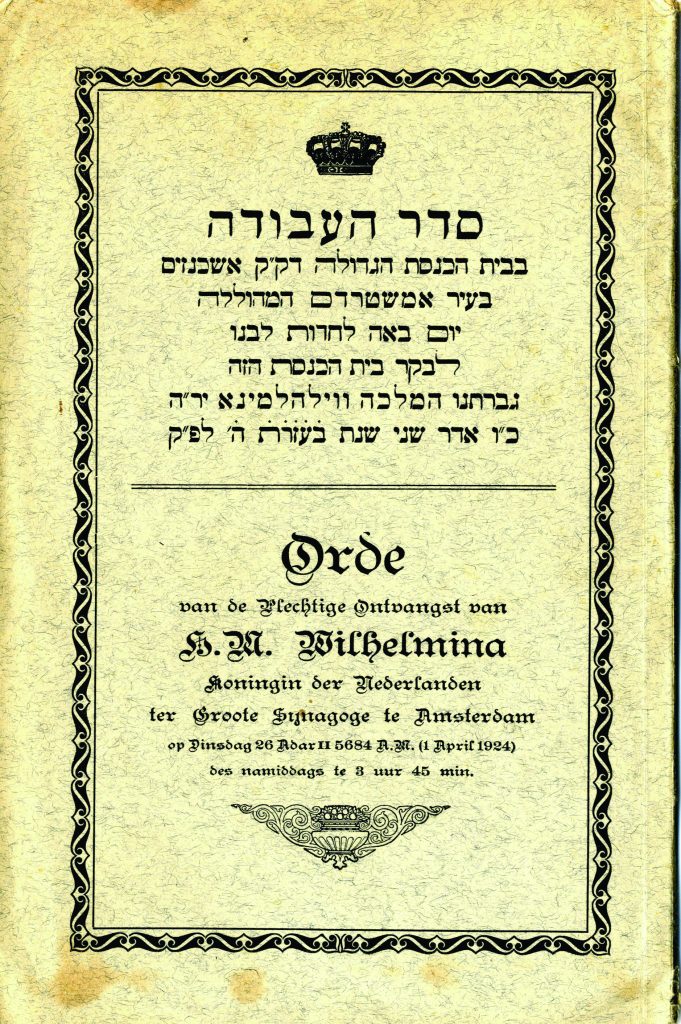 Program from the royal visit

The chairman’s address emphasized the religious freedom and equality historically enjoyed by Dutch Jews even as their coreligionists elsewhere suffered persecution. The rabbi stressed the synagogue’s centrality to Jewish life and the obligation to study Jewish texts. In the name of his congregants, he thanked the royal family, concluding with the verse “For the sake of my brethren and companions, I will now say: peace be within you. For the sake of the house of the Lord, our God, I will seek your good” (Psalms 122:8–9).

As the holy ark was opened, the queen spontaneously rose to her feet together with the entire congregation and was invited to peer inside. A Torah scroll was even unrolled for her inspection. 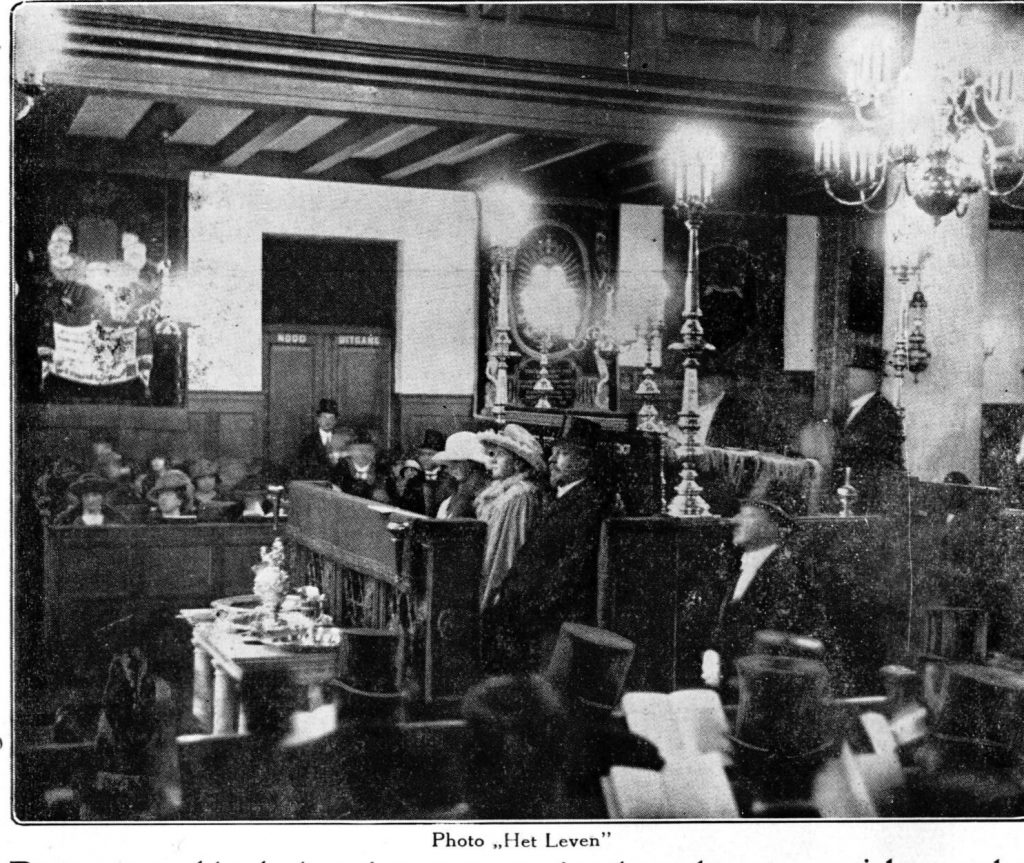 Queen Wilhelmina in the Great Synagogue, 1924

In her words of thanks, Her Majesty praised the choir and noted her unfailing trust in the loyalty of Holland’s Jews. “I had great expectations, but this occasion has surpassed them,” she said. The next day, the public was invited to view the synagogue and the exhibition prepared for the royals.

The one-hour visit made such an impression that the community ordered an ark curtain in honor of the queen’s birthday five months later. Beneath the curtain’s royal crest the inscription read:

Placed in the sanctuary in honor of the Lord and His glory on the occasion of the birthday of our lady, Her Majesty Queen Wilhelmina, that she and her children may long rule over the kingdom. 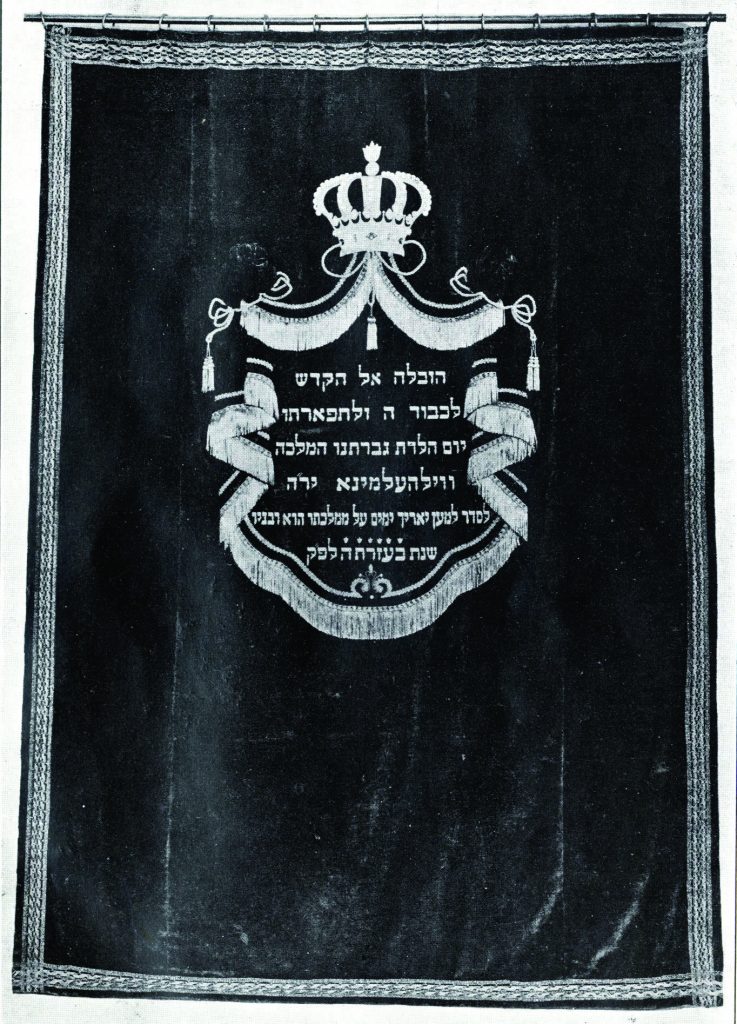 Ark curtain in honor of Her Majesty’s birthday

One minor detail marred the visit: toward the end of 1924, the American press reported a romance between Princess Juliana and the cantor. The source quoted was a non-existent Frankfurt newspaper, and the cantor’s name was also fabricated. Nevertheless, on December 22, the royal family published a denial via the Jewish Telegraphic Agency:

All Holland was indignant at the circulation of such a report, which was termed “an insane, sensational story.”

The alleged hero of the romance, Cantor Elvira, does not exist. Juliana, the Princess, is not fifteen years old and has visited the Amsterdam synagogue only once, on an official visit with her mother, the Queen, on April 1, 1924. 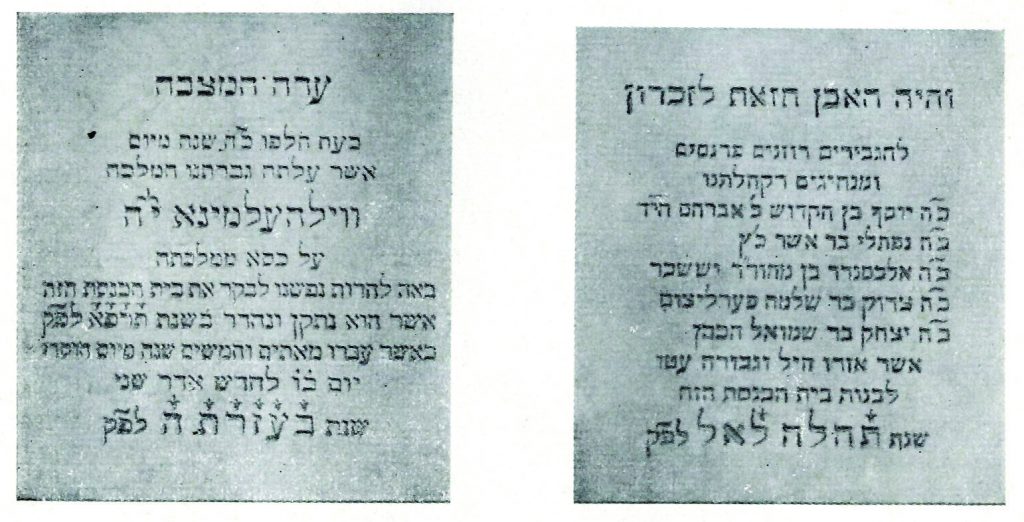 Marble plaques at the entrance to the synagogue, marking its 250th anniversary and twenty-five years of Queen Wilhelmina’s reign