Damned If You Do

Correspondence by and about a Jewish U.S. Army chaplain working in Dachau reveals a hero battling bureaucracy to help his fellow Jews | Elizabeth Levin | In conjunction with the Central Archives for the History of the Jewish People

Germany’s surrender to the Allied forces in May 1945 marked the official end of World War II. Soldiers returned home, and Europe set about rebuilding itself. Germany was divided into zones controlled by various Allied countries until a new government could be elected. Although the concentration camps had been liberated, U.S. Army chaplain Captain Abraham Judah Klausner (1915–2007) discovered there were still many complications for the surviving Jews. Arriving at Dachau three weeks after its liberation, the Reform rabbi quickly became an island of stability in a sea of postwar administrative chaos. Distressed Jews wrote to Klausner inquiring after lost family members, or asking him to forward correspondence and supplies to relatives they couldn’t contact because of postal irregularities or lack of permanent address. In a letter dated July 9, 1945, an anxious mother begged: “Our child is torn away from us six years already.… I hope we will hear good news from our son through you.” A note to her son and twenty-five dollars were enclosed.

Klausner came to symbolize hope as well as steadfastness for those who had no one to turn to. He compiled lists of survivors in Dachau and its Bavarian surroundings, dubbed She’erit Ha-pleita (a biblical term meaning “surviving remnant”), and eventually published six volumes’ worth, which he distributed worldwide. Yet Klausner remains controversial. Passionate about helping Jews, he had little patience for bureaucracy. He could be abrasive and accusatory, openly criticizing people and organizations he felt weren’t doing enough. As a result he made not only friends but enemies, some of whom actively hindered his later efforts to return to Germany and continue his work. A little over a year after the liberation, he left the country, weary and drained. 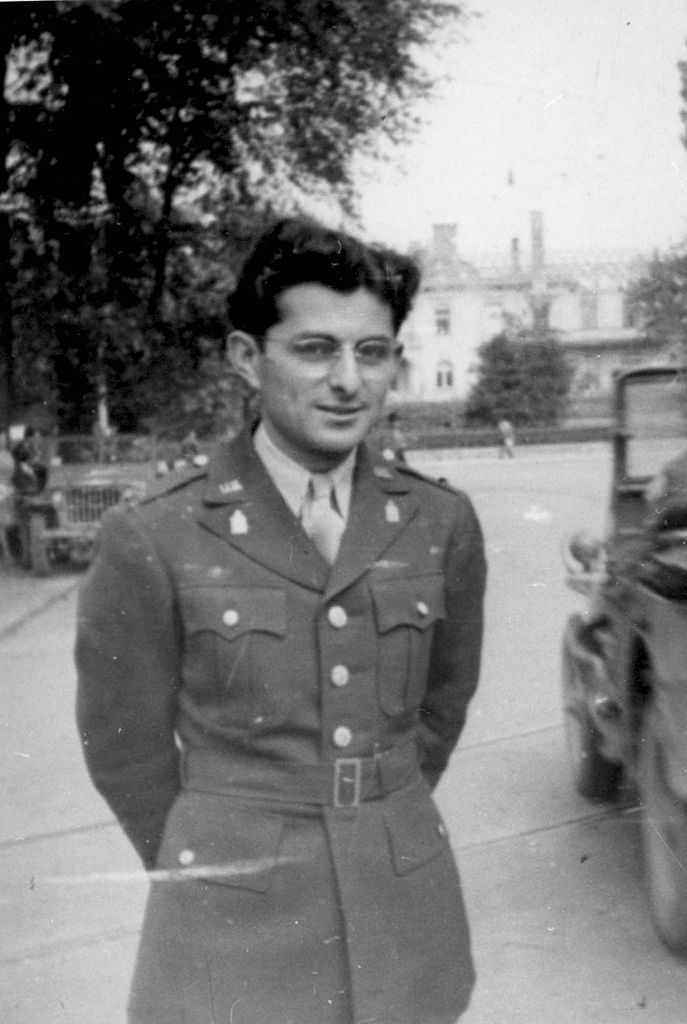 Klausner’s correspondence from 1945 to 1950, including reports and farewell tributes sent to him, is on file at the Central Archives for the History of the Jewish People in Jerusalem. He made many of his appeals on behalf of the Central Committee of Liberated Jews in Bavaria, which he founded together with Dachau survivor Dr. Zalman Grinberg, to give them official standing as representatives of the displaced Jews in Germany’s American zone. Klausner corresponded extensively with American and British Jewish organizations, with growing frustration at the terrible conditions in the camps. His requests to these bodies, the U.S. military, and other chaplains for aid for the Jews living in the Dachau concentration camp and Greater Bavaria were met with promises and excuses.

Losing patience, Klausner sent out a slew of letters denouncing the lack of international and American support for the unfortunate Jews stuck in the camps. He exposed the flaws of the United Nations Relief and Rehabilitation Administration (UNRRA) and the American Jewish Joint Distribution Committee (JDC), the very organizations charged with helping these victims. Tired of bureaucratic distinctions that complicated Jewish aid unnecessarily, he wrote bitterly to a Mrs. Ferman on February 7, 1946:

We care for all our people. We make no distinction between the hungry bellies of Lithuanian Jews and Polish Jews, Orthodox Jews and Jews who are not Orthodox.
We have heard the cry of a child and seen the blood of dying men, and we have never known the quality of the cry or the composition of the blood. We knew only that it was a Jewish cry and Jewish blood.
I know a Jew. He is a wretched figure, he is alone. No family, no love, only memories. […] Must he attach himself to a geographical or religious prejudice before concern will lift him up out of his despair and inspire him with a faith in a new life?

One wonders how Mrs. Ferman viewed this response to her offer to include the Central Committee of Liberated Jews in Bavaria in a program to assist Lithuanian Jewry. Klausner wasn’t always polite when demanding proper treatment of Jewish displaced persons.

Klausner was also determined to open up Mandatory Palestine to Jewish immigration, which the British White Paper initially restricted to a trickle. Whenever anyone sent him an inquiry regarding a family member, he would respond with three requests: (1) donate to his refugees, (2) publicize the fact that the major Jewish and non-Jewish institutions were providing no assistance, and (3) pressure the British government to increase Jewish immigration to Palestine. “The only solution to our problems is Palestine,” he would write. “Underscore this fact, and bring it to the attention of those who may assist us in solving our problems.”

If the international community wanted to end the drain on its resources created by the thousands of Jewish DPs languishing in the camps, Klausner insisted, it had to allow Jewish immigration. As he pointed out in a letter to the American Jewish Congress dated December 8, 1945: “All present want to emigrate.… If the gates of Palestine were opened tomorrow, it is safe to say that 90 percent of the Jews would go to Palestine. However, if other opportunities for emigration were granted, there would be an appreciable decrease in this number.” Many Jews could not or would not return to the places they had once called home, and the wait for visas to restricted destinations such as the United States and Palestine could be years. The Jewish DPs needed a solution, and for Klausner, Palestine was the best, most attainable option. 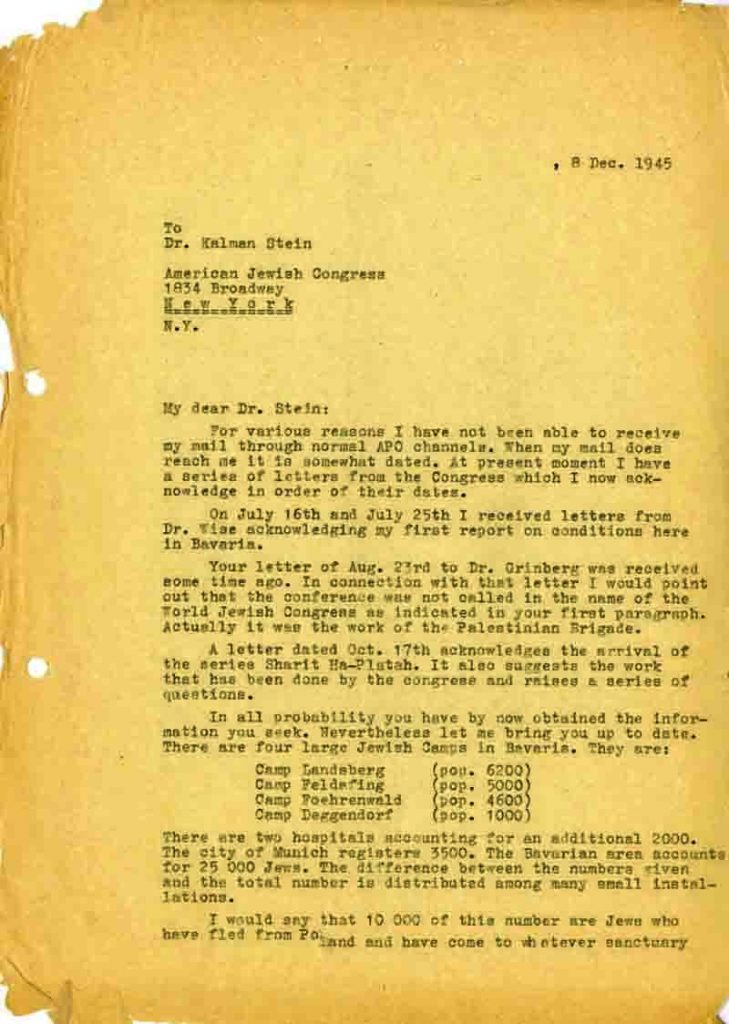 Understandably, considering the anguish he witnessed daily, Klausner sometimes took initiative without following proper procedures, making him persona non grata with many organizations. He wrote in exasperation to his friend Irene on April 6, 1946:

Stay in channels and be damned! We have been crying for a hospital for Munich these months. Finally we took it upon ourselves to track down a good institution. We spotted three. Two we placed in channels … the third we played around with ourselves. We have a third, a going Jewish hospital in Munich. The other two are stuck in channels, and are we getting hell from UNRRA for our endeavors! 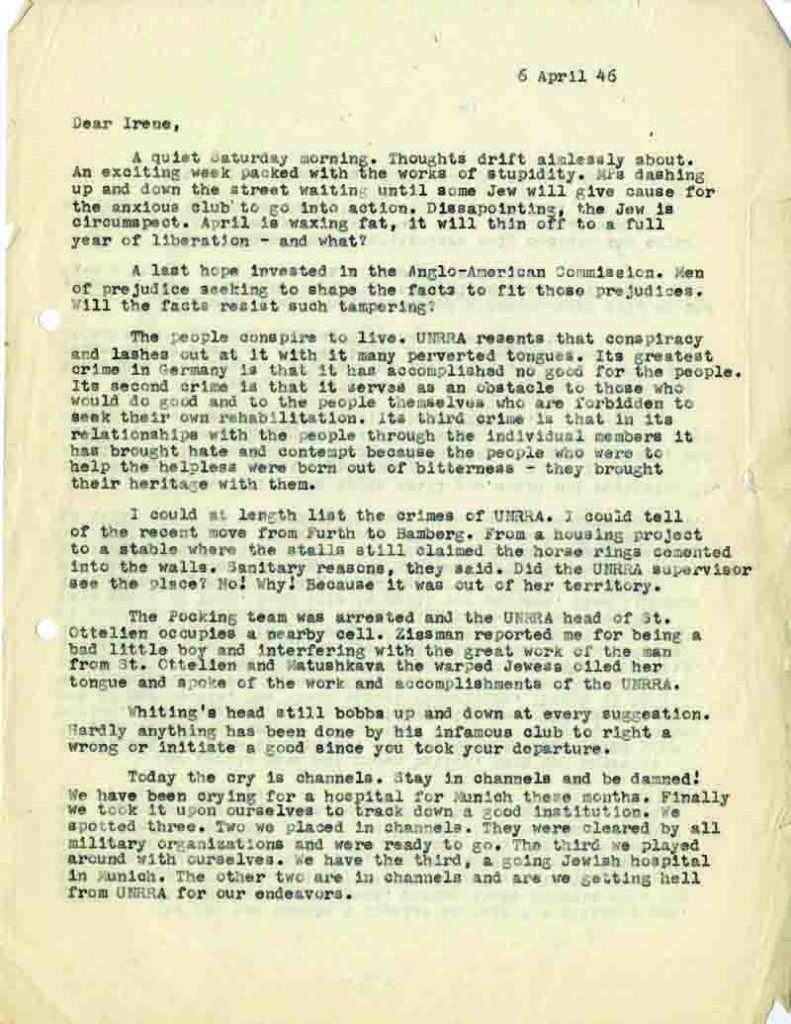 Klausner’s letter to his friend Irene on April 6, 1946

Klausner’s impatience with bureaucracy, particularly UNRRA’s, hurt his career. In “very confidential” correspondence dated January 8, 1947, between I. L. Kenen of the American Jewish Conference and Rabbi Philip Bernstein, adviser to the theater commander on Jewish affairs, the latter made it clear that as far as the army was concerned, Klausner was welcome to work as a chaplain (i.e., with U.S. army personnel, not with the refugees) “anywhere but in the Munich-Bavaria area.” In a letter dated two days earlier, Bernstein told Kenen: “It was the combined judgment of the responsible authorities, military as well as civilian, that Rabbi Klausner should not remain any longer in Germany. This was no reflection on his character and devotion, but on his attitude and methods.” Though two Jewish organizations – Klausner’s own Central Committee and the American Jewish Conference – wanted him to act as a liaison in Germany, he had created such a stir that the authorities didn’t want him back.

But not everyone was against him. Among the valedictory speeches written in praise of Klausner before he left Germany, one former DP thanked the rabbi for giving him hope and direction. Blunt though he might have been, Klausner did tremendous good in the chaotic power vacuum left by the collapse of the Nazi regime. He fought tirelessly to provide the DPs with what they really needed – as opposed to what bureaucrats and distant philanthropists thought they required – mounting a one-man struggle, in the face of unfathomable horror, to help those who couldn’t help themselves.