A Man unto Himself

Rabbi Akiva Yosef Schlesinger (1836–1922) was a controversial, eccentric, passionate, premodern Zionist from Hungary who moved to Ottoman Palestine in 1870. He had been a student of the famous scholar the Ketav Sofer in Pressburg, and his father had studied under the latter’s father, the renowned Chatam Sofer.

Despite Schlesinger’s rigid and often extreme religious views and his distaste for even minor change, which should have endeared him to the Old Yishuv (the ultra-Orthodox Jewish community in prestate Jerusalem), his sometimes unorthodox ideas brought him into conflict with it. For instance, he realized early on that charity was no way to build a country and that employment had to be created. Learning from the small agricultural initiatives already existing, he was among the Hungarian Jews who worked with Yoel Moshe Salomon to establish the religious settlement of Petah Tikva.

Schlesinger became embroiled in four religious controversies. The first was the reintroduction of a blue thread among the white fringes (tzitzit) of the four-cornered garments worn by Orthodox Jews. The practice had died out together with the requisite dye, made from the Murex genus of snails. But in the 19th century, a Hasidic master from the Polish town of Radzin claimed he had rediscovered the ancient color – which he made from squid – and his followers began wearing blue threads.

Schlesinger brought the dye to Jerusalem at the beginning of the 1890s. This innovation enraged Jerusalem’s ultra-Orthodox elite, led by brilliant young Hillel Meshel Gelbstein, a follower of the rival Kotzker Rebbe. In a fascinating but virulent book entitled Ptil Tekhelet (A Thread of Blue), Gelbstein denounced the modern tekhelet and branded those who wore it idol worshippers. Since pagans are not acceptable witnesses under Jewish law, Gelbstein then tried to oust Schlesinger as halakhic consultant at Jerusalem’s Tiferet Yisrael Synagogue. Storming into morning prayers at the synagogue where Schlesinger prayed, Gelbstein’s agents ripped the rabbi’s blue-threaded prayer shawl off his shoulders. Emerging from the ensuing fist fight, these men brought the offending garment to Gelbstein, who treated it as one would any item associated with idol worship – by burning it. Just to make his point perfectly clear, he destroyed the shawl publicly: on the flat roof of the Hurvah Synagogue, high above the main square of the Old City.

Schlesinger also advocated the revival of the Passover sacrifice on the Temple Mount. Halakhically, sacrifices may be offered on the site even without a Temple, but most Jews found the idea of reinstituting this ritual after almost nineteen hundred years shocking. In addition, the rabbi considered repealing the ban on polygamy enacted by Rabbeinu Gershon of Mainz in 1040. And of course, there was his willingness to blow the shofar on the Sabbath.

All four of these issues raised deep questions about whether and how Jewish law can change and develop – questions that remain pivotal today. 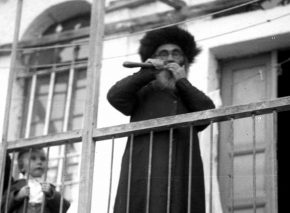