Mark Gertler – Nothing but Art

Mark Gertler (1891-1939) was born into a Yiddish-speaking Polish family living in a one-room flat in London’s East End. His early artistic promise was rewarded in 1908 with a scholarship from the Jewish Education Aid Society, allowing him to enroll at the prestigious Slade School of Art. His contemporaries there included David Bomberg (see “Portrait of a People,” Segula 44), Paul Nash, Stanley Spencer, and Dora Carrington. Like many of his bohemian colleagues, Gertler fell madly in love with Carrington – an unrequited passion that dogged him all his adult life. 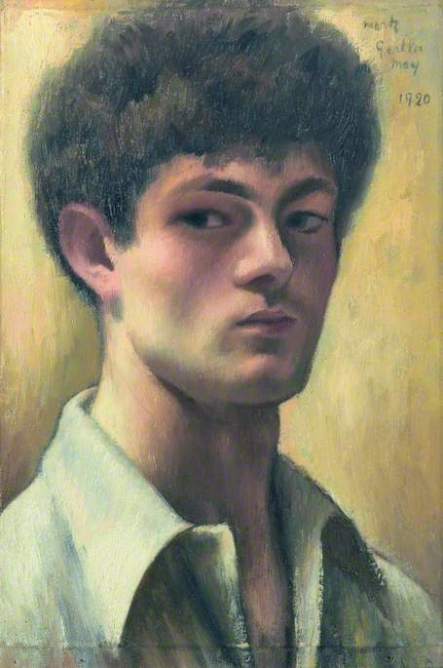 But art was Gertler’s greatest love. Maturing early, he exhibited his most famous painting, Merry-Go-Round, in 1916, at his first solo show. Staged mid-war, the exhibition gave his pacifism free rein.

Gertler’s frailty had saved him from the draft, and after World War I he recuperated from tuberculosis in the south of France. There he encountered post-impressionism, but his style remained highly individual, with strong elements of eastern European folk art.

In the late 1930s, Gertler moved into bold, modern still-lifes. Reducing his subjects to a play of lines and colors, largely ignoring perspective and detail, he abandoned both sentiment and symbolism. Fishes, completed two years before his death in 1939, is a perfect example.

Gertler’s personal life was erratic, burdened by economic insecurity, a failed marriage, ill health, and depression, but his faltering reputation as a painter pained him most.

Despairing, Gertler committed suicide (his second attempt) at age forty-seven, pushing a mattress against the door of his London studio and gassing himself. Yet today he’s considered one of Britain’s most significant 20th-century artists.

The Rabbi and His Grandchild, completed in 1913, is one of Gertler’s earlier and less famous paintings. At the time, he was working on portraits of an old man and a young girl – Dora Plaskowsky, daughter of the family butcher. Struck by the contrast between youth and age, between Dora’s unusual coloring and the elderly sage’s pallor, Gertler decided to combine the two in a double portrait. In fact, this rabbi and his “grandchild” were unrelated and never met. 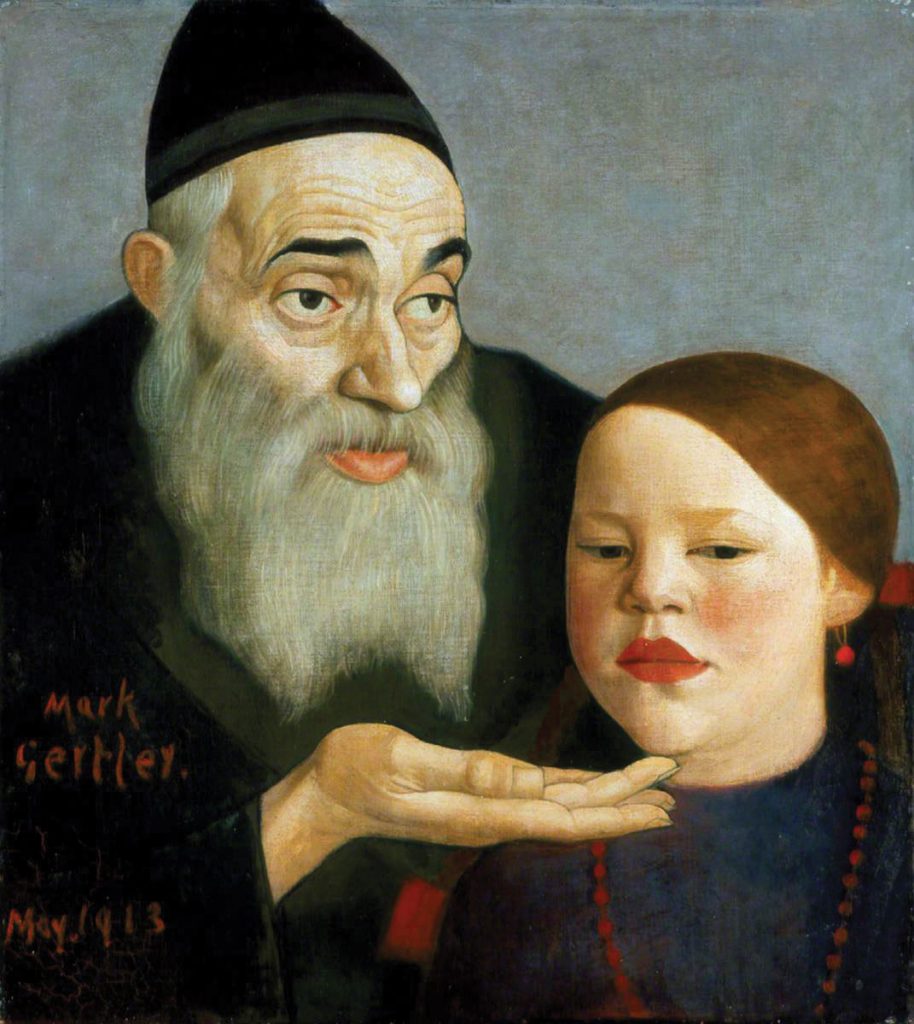 Defining a period and incorporating various avant-garde styles, from the end of the 19th to the early 20th century. Includes movements such as Post Impressionism, cubism and surrealism 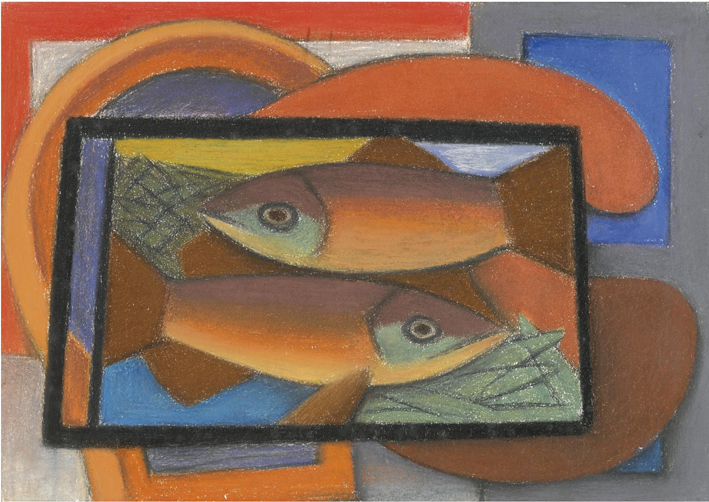 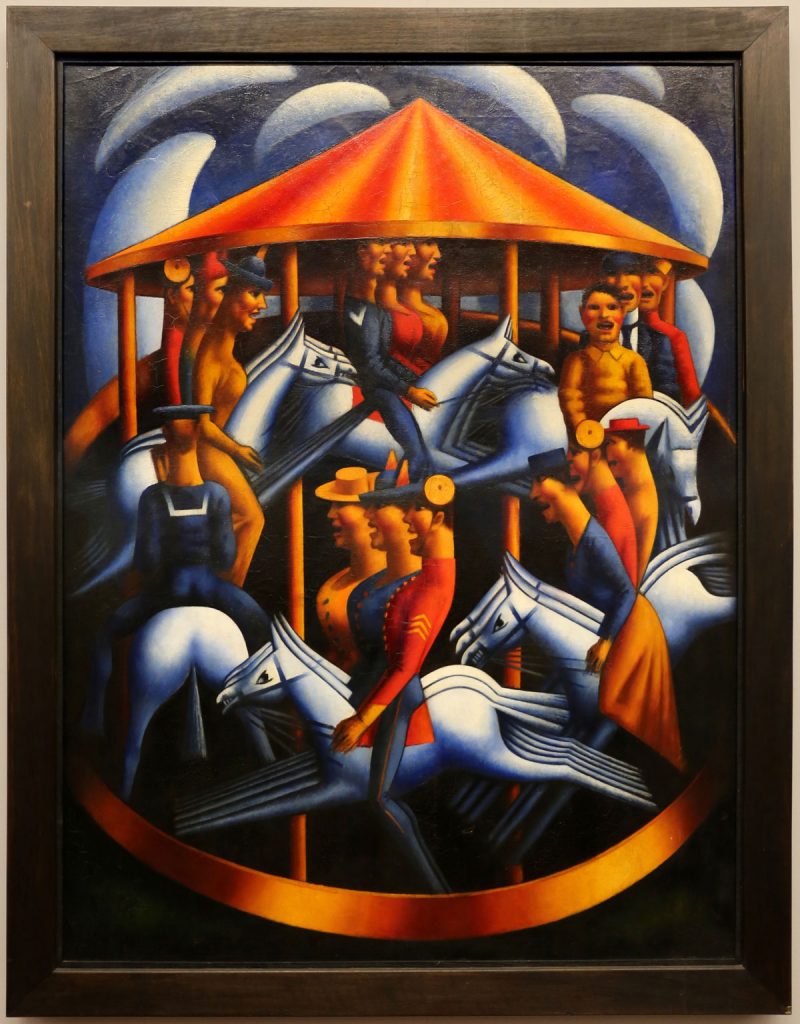 Painted at the height of World War I, Merry-Go-Round shows men and women in rigid poses, mouths agape in a silent scream, trapped on an endlessly revolving carousel. Inspired by the merry-go-round at a fair held on London’s Hampstead Heath in 1915 for wounded soldiers, the ride has been transformed into a horrific metaphor for the relentless military machine