Stamp of National Identity
Clandestine Printing
History in the Making
By: איתמר עצמון

Despite the need for secrecy, and with production lines under fire, Israel’s first stamps were printed in time for independence // Itamar Atzmon

On 5 Iyar – the final day of the British Mandate – the Haaretz daily excitedly described the printing of the State of Israel’s first stamps.

Silence reigned between the walls of the small shack, punctuated by the monotonous staccato of the two printing presses. Alongside the two manual perforators, two men worked away…. An air of anxious secrecy prevailed: hushed footsteps, messages whispered behind cupped hands, the dull clickety-clack of machines, the shack’s somewhat remote location outside the city – all intensified the sense of stealth…. The weak light barely filtering through the solitary grimy window added to the furtive atmosphere. Something was indeed going on here, something special and uniquely important. (P. Azzai, “Hebrew Postage Stamps Printed Here”)

Amid the weighty issues of the days leading up to Israel’s independence, the look of the first Israeli stamps was relatively minor. Yet the stamps were a token of long-awaited autonomy, so their design required significant thought and effort. Coins, flags, and a national anthem could wait, but letters had to be posted, and the first stamps – issued by the new state on its first day – were received with great emotion. 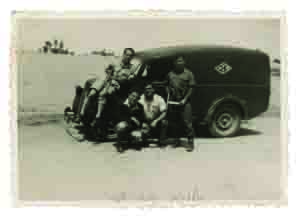 The stamps were delivered by Hagana teams on the day before independence was declared, using old British postal vans. One team delivered to Rishon Lezion, Nes Ziona, Rehovot, and Gedera, where local politicians opened bottles of wine and local rabbis recited the Sheheheyanu blessing over the new stamps

The British Mandate had imported its stamps from England, so there were no machines, materials, or experts to produce Israel’s own. The decision to issue stamps right away created a host of problems – and some highly inventive, even courageous solutions.

The Zionist leadership began building the infrastructure for the state in November 1947, after the UN vote on partition. A five-man committee headed by David Remez (later transport and postage minister) was secretly established to deal with postage, but security issues quickly took precedence, and the committee reconvened only in March 1948, when the Mandate government announced that postal services would be discontinued and began destroying stamps. With the British still in command, printing stamps was illegal, so the entire project had to be a cloak and dagger operation.

Four designers were approached in early April and given just one day to sketch their vision. Otte Wallish’s, based on ancient Jewish coins – which, to his mind, symbolized war and independence and therefore captured the spirit of the times – was chosen.

The coins that would appear on the stamps were selected in consultation with experts, including archaeologist Eliezer Lipa Sukenik (Yadin) and numismatist Leo Kadman. They chose coins from the Great Revolt and the Bar Kochba rebellion. Although no coins were issued during the Hasmonean revolt, the stamps featured coinage mistakenly dated to that period and captioned as such. Thus, three attempts to restore Jewish independence two millennia earlier were perpetuated in the State of Israel’s first stamps.

Despite the tense military situation, the first stamps were meticulously detailed and quite aesthetic. The first samples were produced on the Haaretz printing press in Tel Aviv. No printing blocks could be acquired without exposing the entire operation, so those used for printing Broadway cigarette wrappers at the same press were used instead. 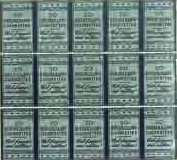 Printing was to begin at the famous Levin-Epstein press in Bath Yam, but as Arab gangs were firing on the town, production moved back to the Haaretz press. Yet said press was next-door to the newspaper’s headquarters, teeming with reporters. Just one wagging tongue could embroil the Zionist administration in an ugly confrontation with the outgoing British government.

The next hurdle was paper. Imports had ground to a halt in the weeks before the departure of the British, so paper was running low. Haaretz’s printing director began frantically buying up existing stock – without revealing why, of course. As a result, paper kind and quality varied. Philatelists still classify the state’s first stamps according to these variations; the rarer the paper, the more valuable the stamp.

In the interest of secrecy, the printing press was moved in the dead of night from the Haaretz offices to a deserted British police station in the German colony of Sharona (today Israel’s general staff headquarters). The building had originally served as a German printing house, so pictures of Hitler covered the walls, and Nazi propaganda and documents stamped with swastikas were strewn all over the floor. With paper scarce, many of these items were used to print stamps.

Amid fierce public debate as to the name of the new state – “Eretz Yisrael” and “Judea” were strong candidates –the printers realized that the final decision would be made only after their printing deadline. Remez came up with a solution – the stamps bore the neutral caption Doar Ivri (Hebrew Post).

The coins featured on the stamps were inscribed in ancient Hebrew script, which was unintelligible to the average citizen. Therefore, Dr. Moshe Hezki, philatelic consultant for Mandate postage services, suggested tabbing each stamp with a transcription. Given the paper shortage, tabs were added only to the bottom row of each sheet of stamps. These tabs became the hallmark of Israeli stamps. Cast-lead Hebrew letters were attached to the printing press to print the tabs. As these letters wore out faster than the actual printing blocks, identical stamps were often printed with slightly different tabs. 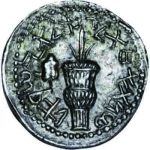 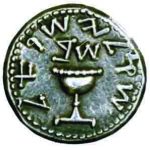 Coins from the Great Revolt and the Bar Kokhba rebellion, and the stamps they inspired. The identifying tabs display the coins’ inscriptions in Hebrew block lettering

History in the Making

A Tel Aviv factory started preparing the printing blocks on 23 Nisan. Work had only just begun when it was disrupted by Arab shelling from Jaffa. The operation continued despite extensive damage to the equipment, including some of the blocks. Printing commenced two days later – and immediately ran into problems. The perforating machines wore out quickly, and printing personnel frantically searched for suitable replacements. Meanwhile, perforation continued manually. Three new machines were found – one of them pedal-operated – each producing stamps with different-size perforations and creating yet another set of categories for philatelists.

In less than two weeks, five million copies of nine stamps of different values were printed. Specially designed envelopes – “first-day covers” – were printed for collectors, to be stamped with the opening date of the Israeli postal service. By now the British had relaxed restrictions, so the envelopes were printed at Haaretz headquarters. Once again, aerial bombardment disrupted printing, even causing the death of the chief printer, but work proceeded. 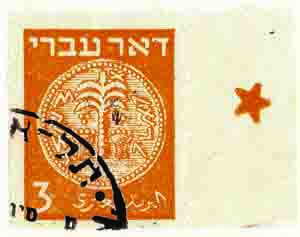 Hand-perforated stamp from the first series

On 4 Iyar, Remez invited the press to preview the stamps. Printing was completed the next day, in time for the declaration of independence. On the morning of 7 Iyar, the new stamps were available at post offices. Despite fears of renewed Egyptian bombardment of Tel Aviv, citizens lined up to buy “the first Jewish stamps in two thousand years,” as the official stamp catalog later called them (though postage stamps were invented only in the 19th century!).

Doar Ivri stamps continued to be printed that year, even after the state had an official name. They remained current until 1951. 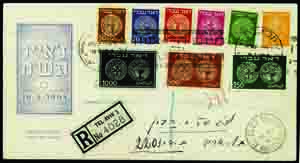 First-day cover with all nine stamps in the first series, stamped with the date 7 Iyar 5708