A Widow in Print

Dawn of Hebrew Printing
Family Affair
No Rest for the Righteous
By: חנה לוקשין-בוב

The dawn of Hebrew printing naturally followed hot on the heels of the earliest books published in Europe, circa 1455. The first year to figure in Hebrew print was 1475, beginning with Rashi’s Bible commentary, which rolled off the presses February 17 (10 Adar) in Reggio di Calabria, at the southern tip of Italy.

Arba’a Turim (Four Columns), a code of Jewish law written in Spain in the early 14th century, was published just a few months later in northern Italy. Though the printing is neat, straight, and attractive, conveying order and stability, a tragic story looms behind it.

The book’s content, like its appearance, suggests order and control. Composed by Rabbi Jacob ben Asher and completed in manuscript form around the year 1430, the Arba’a Turim is an important and ambitious four-volume work that organizes and summarizes all Jewish law relevant in the author’s day, and in a unique order. In his introduction to the fourth volume, Rabbi Jacob ben Asher explains his goals:

When I, Jacob, son of our teacher Rabbi Asher of blessed memory, saw that due to our sins the Temple was destroyed […] and that there is no righteous judge, [but rather] each does what is right in his eyes […], I decided to compose a compendium of civil law […] that a reader could easily read through and follow exactly, without straying right or left. And I called the book Hoshen Mishpat (The Breastplate of Judgment).

Unlike many early Hebrew works, the Tur – as it’s known for short – listed its date and place of publication as well as its publisher. At the end of the fourth volume, a copy of which is housed in the National Library of Israel, this information appeared in verse:

The holy work was completed
On Monday, the twenty-eighth of the month
Of Tammuz, which is the fourth month,
5,235 years on the calendar,
In Piove di Sacco, in the home of our teacher, Rabbi Meshullam,
Who is called Kuzi. May [this home] be blessed now and forever!

At the end of this volume, another poem appears, in which the printer or proofreader praises his own work and the printing process itself, a new technology whose secrets were privy only to its masters:

I am a skill that crowns all other wisdom.
I am framed and hidden more than any other secret.
With no quill my mark is made;
With no scribe my text appears.
At one pass, ink runs over me;
With no ruling, the writing is straight.
Marvel at the lady Deborah –
She is a poet among scribes.
If she were to see me down below,
I would be placed upon her head as a banner.

Most information about incunabula (publications produced before 1500) originates in the books themselves. Regarding this fourth volume, however, we know something about it from outside sources as well as from hints in the earlier three sections.

Who was the printer Meshullam Kuzi? A responsum written by 15th-century Ashkenazic scholar Maharam Mintz indicates that Meshullam was a respected rabbi in Padua. And according to the rhyming colophon concluding the first volume, he died before it was completed.

Do you know who decided to print the Arba’a Turim?
It was our teacher Rabbi Kuzi, a great and generous man.
But he wasn’t there for its completion; for this I mourn doubly.
He left me on earth and went to the land of eternal life.
But his sons filled the breach and picked up what remained.
May He who dwells in Heaven reward them handsomely,
And may they be privileged to ascend next year to Jerusalem.

This elegy was apparently written by Meshullam’s widow, “Deborah the Poet,” mentioned in the previous poem. 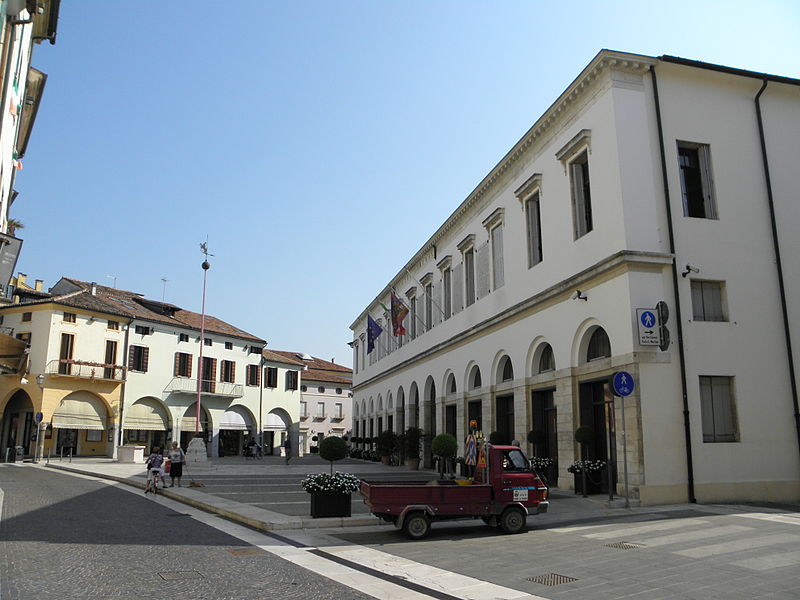 Piove di Sacco, where the first edition of the Tur was printed by Meshullam Kuzi, as it looks today

No Rest for the Righteous

Additional information about the family appears at the end of the third volume. The widow recalls her husband’s passing, then adds:

And so his sons fulfilled my plea,
Finishing my book, that I not be shamed.
Just as they merited to mend my work,
So too may they be privileged to go free.

Deborah’s sons were evidently imprisoned at the time of the third volume’s completion. The books don’t explain why, nor do we know what happened to them.

Other sources, however, inform us that while Meshullam Kuzi’s family was printing the Arba’a Turim, a charismatic Christian preacher named Bernadino de Feltre was touring northern Italy, inciting the populace against the Jews. When a Christian boy disappeared in Trento around Passover of 1475, the cleric accused the Jews of killing him for ritual purposes. At least eight Jews were jailed on these charges and later executed, unleashing anti-Jewish violence throughout the region. 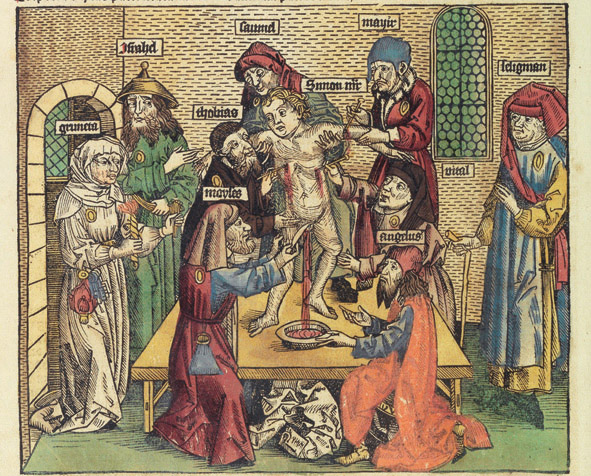 Illustration of the Trento blood libel from the
Nuremberg Chronicle, printed in 1493

If Kuzi’s sons indeed perished in the blood libel, then shortly after being widowed, Deborah became a bereaved mother as well. Nonetheless, this woman kept the printing press going, completing the publication of the Arba’a Turim and signing off not with a lament, but with a colophon of poetry and praise.