New Year cards have been popular for close to a hundred years, but today the Internet era has made them virtually obsolete. This now largely abandoned tradition has left us with a fascinating record of what has been perhaps the most tumultuous century in Jewish history // Rahel Sarfati

This article is dedicated in memory of Haim Stier, who passed away in the course of our combined efforts to transfer his extensive collection of New Year cards to the Israel Museum. (Published at Issue 7, Tishrei 5772, October 2011) 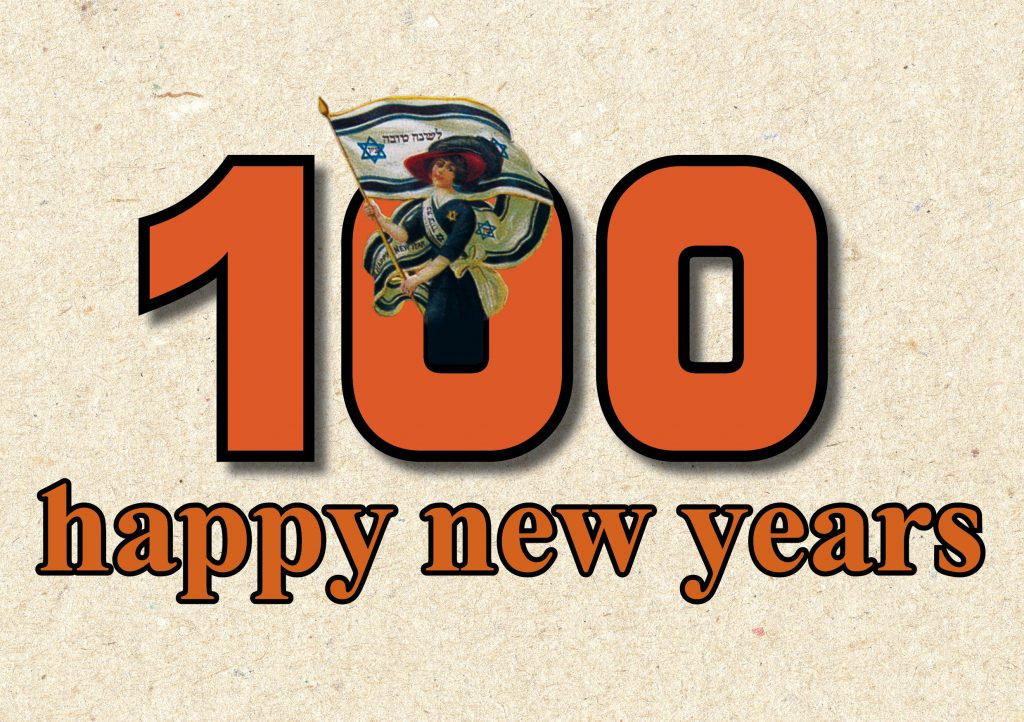 Thirty years ago, when sending out New Year’s cards was still a matter of course, who would have thought of making them the subject of an exhibition, let alone a museum exhibit. Progress, however, seems to have moved into fast forward in the last few years,  and with the invention of social media, from fax to tweet, the Shana Tova card has rapidly become obsolete. At the same time, the historic, cultural and nostalgic value of what was once a common item, has increased enormously.

For close to a hundred years, Shana Tova cards have served as a heartwarming way of sending New Year greetings to family and friends. The custom originated at the end of the 19th century, with the invention of the postcard. These rapidly spawned greeting cards for Valentine’s Day, Christmas and New Years, a practice which the German Jewish community adapted , “converting” the greeting cards for Rosh Hashanah, the Jewish New Year. The custom spread throughout Europe, quickly reaching the growing concentrations of Jews in the United States and Palestine.

The motifs decorating a card bearing wishes for a successful year obviously had to reflect the similar sentiments. A wealth of such motifs included honey cake, flowers, birds, angels, or cornucopia, as well as images associated with the High Holyday prayers. One such card, illustrated here (Germany, circa 1910), combines a stylized ship, presumably symbolizing sailing into the future, flowers and a cantor complete with Torah scroll. Other cards from the first half of the twentieth century provide a fascinating record of the lifestyle of Jewish communities in Europe. Local artists painted or photographed figures from daily life, in addition to Jewish life cycle ceremonies and the festivals of the Jewish calendar. Contemporary technological innovations, such as the newly invented telephone, also featured prominently.

Somewhat surprisingly, many Shana Tova cards carry depictions of the historical events of the past hundred years, decidedly one of the stormiest periods in Jewish history. The personal New Year’s message sent in many such cards was accompanied by a nationalistic motto with which presumably both sender and receiver identified.. All the sender had to do to make an ideological statement was to sign his name beneath the slogan of his choice and address the envelope. The result is a veritable visual overview of the key events of contemporary Jewish history.

The massive migration of Eastern European Jewry to the United States is reflected in numerous Shana Tova cards from the early decades of the last century. A immigrant ship is a frequent motif on these cards, which are consequently referred to as shifskarte. The Statue of Liberty or some other female figure is often depicted welcoming the crushed, dejected newcomers with open arms. This warm, welcoming message, was in fact little more than wishful thinking on the part of American Jewry hoping to encourage their persecuted brethren in Poland and Russia to join them. In fact, opposition to this type of mass immigration was building up within the United States administration, and from the late 1920s severe restrictions were placed on Jewish immigration. From then  on, many of the migrants turned eastward  – in the direction of Israel.

The Zionist movement used Shana Tova cards for its own propaganda purposes, and those produced for Zionist groups bore various Zionist symbols. Many Shana Tova cards had biblical motifs, to emphasize – in the spirit of the Zionist idea – the connection between the Jewish people and the Land of Israel, and the value of working the land. In place of “Miss America” in the Shana Tova cards, another female figure appears – Bat Zion, the daughter of Zion – who also carries the promise of an ideal life in the new homeland.

A year of building, planting and settlement – watchtower, stockade and plough

During the 1930s, residents of Tel Aviv would have themselves photographed, with vistas of the developing city behind them; these pictures would be sent to relatives abroad, with wishes for the New Year. Such pictures carried a message – sometimes overt and sometimes less so – calling for aliya to Eretz Israel.

The growing Jewish population in Eretz Israel became, toward the middle of the century, a dominant source of ideas for Shana Tova cards. Images of Jews praying, or working at the traditional occupations of the Eastern European shtetl, made way for the “new Jew.” With the establishment of the State of Israel and the outbreak of the War of Independence, a new image of the Israeli Jew was added – that of the Jewish soldier defending his land. Greeting cards from the 1950s often bore ideological messages relating to settling the land, hopes for its security, and even for expansion of its borders.

A Happy New Year, fresh from the field

Due to the victory of the Israel Defense Forces in the Six-Day War, military motifs became a central element appearing on greeting cards produced in subsequent years. These cards depict soldiers, tanks and warplanes, alongside the heroes of that war – Moshe Dayan, Yitzhak Rabin and others – and sites such as the Western Wall, Me’arat Hamachpela and Rachel’s Tomb, which were now within the borders of the State. Many of these images were dusted with sparkling gold powder, which made the images appear even brighter.

The military motifs disappeared immediately following the gloom of the Yom Kippur War. In the year following the war, a small but fascinating Shana Tova card was printed, depicting Prime Minister Golda Meir and President Zalman Shazar in a darkened room, with their silent expression offering no blessing toward the New Year. The choice of this image as a subject for a Shana Tova card is no less surprising than the fact that, out of habit, this card too was sprinkled with gold dust.

A year after the Yom Kippur War of 1973, politicians hope for a better year

The seventies and eighties brought with them an openness to western culture, and a shift from nationalist, ideological messages to more personal, individual ones. Shana Tova cards from this period depict families sitting happily in their bourgeois living rooms. Cultural heroes such as the Beatles, Elvis Presley and others like them also became common motifs, along with images of romantic couples on a background of Israeli scenery.

A Rockin’ Rolling year to all Elvis fans

Best wishes for a year filled with love and romance

Israel’s peace treaties with Egypt and Jordan, signed in the closing decades of the 20th century, signified, among other things, a return to contemporary political imagery on Shana Tova cards, such as this collectors’ item marking the peace treaty with Jordan.

A year of shalom, salaam, peace

Rabin’s assassination in 1995 also became grist for the card-designers’ mill. Artist Ilan Molcho has issued a Shana Tova card thematically linked to this event each year, indicating the number of years that have passed since the prime minister’s death. Unlike traditional Shana Tova cards, which look forward to the approaching New Year, Molcho’s cards commemorate the past.

From hopeful wishes to mournful commemoration

Shalom Tzabar, “One Hundred Years of Shana Tova Cards: the History of the Custom and its Artistic Development,” in Bashana Haba’ah: Shana Tova Cards from the Kibbutz, Muki Tzur (ed.), Givat Haviva 2001 [Hebrew].