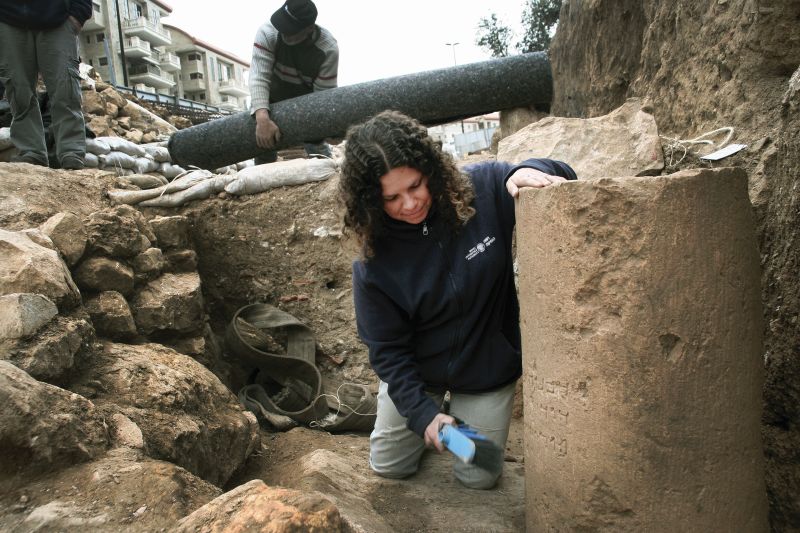 Jerusalem’s International Convention Center, near the city entrance, has long been known to be built over a ceramics factory operated by the Roman Tenth Legion. Now excavations nearby have revealed the remains of a Jewish potters’ village whose workshops were converted by the legion for its own use – and with them a sensational find: the earliest known example of the capital’s Hebrew name as spelled today – Yerushalayim as opposed to Yerushalem.

The column drum bearing the inscription dates back to Herod, some 2,050 years ago. The second-earliest evidence of this spelling appears on a coin minted between 66 and 70, during the Judean revolt against Rome about a century later.

Danit Levi, the Israel Excavation Authority archaeologist directing the project, points out that the drum was taken from its original site for secondary use in the foundations of a Roman building. Inscribed “Hananiah son of Dudolos of Jerusalem” – in Hebrew letters – the artifact probably came from a workshop belonging to a potter named Hananiah, or a building he helped fund.

For some three centuries, from the Hasmonean kingdom until the late Roman period, the potters’ village supplied Jerusalem with tableware, etc., in large quantities. Experts suggest that Hananiah (or his father) sought to distinguish himself as a master potter by adopting the name of Daedalus, the mythological Greek wing maker. Intriguingly, despite the village’s proximity to Jerusalem, this Jewish craftsman also stressed his Jerusalemite origins.

The inscription is currently on display at the Israel Museum, Jerusalem.