The Jewish Girl who Set the Wild West Ablaze

The gunfight at the OK Corral has become one of the Wild West’s most iconic moments. Not many know, though, that it involved a young Jewish woman with a highly colored life-story

Gunfight at the OK Corral

The legendary gunfight between Sheriffs Morgan, Virgil  and Wyatt Earp on one side, and the Clanton and McLaury  on brothers on the other,  broke out on October 26, 1881, at 3 pm, at the OK Corral in Tombstone, Arizona.

The whole gunfight only lasted thirty seconds, but it came to represent the total absence of law and order, and the frequent gunfights by which arguments were settled instead, on America’s Western frontier. This iconic moment in  the history of the Wild West was immortalized in countless books and films, most famously in the film Tombstone (1993).

While the rivalry between the gangs is famous, the fact that one of its causes was the romantic rivalry between Earp and Sheriff Johnny Behan over Earp’s common-law Jewish wife, Josie Marcus, is less well known. Born in Brooklyn in 1860 to a family of Prussian immigrants who later moved to San Francisco, the rebellious teenage Josie rejected the security of her Jewish home and education after the family’s fortunes took a downturn. Just fourteen, she left San Francisco for rough-and-tumble Tombstone, where her good looks and adventurous spirit won Wyatt’s heart (among others).

The record of Josie’s life-story between 1874 and 1880 is intentionally confused, as she did her best to hide them, but some historians claim she worked in brothels under the name Sadie Mansfield. 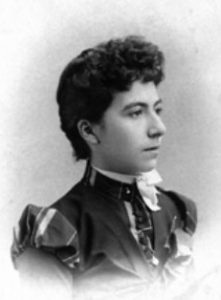 Arriving in Tombstone in 1880, Josie came across Sheriff Johnny Behan, thirteen years her senior. He fell in love with her and proposed marriage, and she stayed with him even though his promises to make a respectable woman of her never materialized.

Behan was friendly with the Clanton brothers at the time, so when Josie tired of him and transferred her affections to Wyatt Earp in 1881, the romantic triangle fanned the flames of resentment already existing between the rival gangs. Although Behan wasn’t directly involved in the shootinghe showdown at the OK Corral broke out shortly after Josie took up with Wyatt Earp. 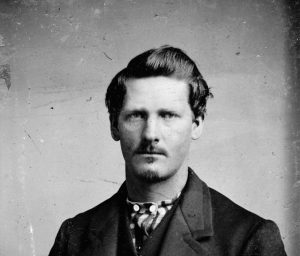 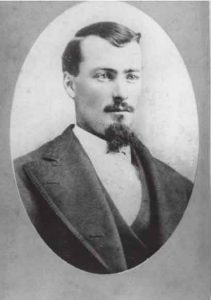 Josie finally found stability of a kind in her relationship with Earp. The two stayed together until Wyatt Earp’s dying day in 1929, though they never seem to have been officially wed. Josie claimed they had a civil marriage ceremony on board a yacht in 1892, and she inherited him as his common-law wife.

Wandering all over the Wild West, the couple relied on their earnings from gambling, boot-legging and sundry shady business ventures. Their relationship was complicated to say the least; acquaintances described their violent arguments as well as their long-standing affection. Josie spent her later years defining and refining Wyatt Earp’s story, covering up the more unsavory aspects of both their careers, and she’s largely responsible for his fame as an American hero. Josephine Marcus Earp died in 1944, and is buried in California beside Wyatt Earp. 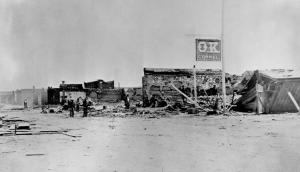 Fire broke out in the OK Corral in 1882, leaving it as it appears in this photo