The Congress that Founded the Jewish State

From Book to Congress
Ingathering of Exiles
Dressed for the theater
In Basel I Founded the Jewish State
By: עשהאל אבלמן

Though few famous names attended the first Zionist Congress in Basel, the enormous energy Herzl invested to ensure the dignity of the occasion made Zionism a political movement no one could ignore

From Book to Congress

In February 1896, Herzl published Der Judenstaat (The Jewish State). Discussed in dozens of Jewish newspapers, the pamphlet was soon translated into English, French, Russian, Yiddish, Hebrew, Romanian, and Bulgarian. The overwhelming response it elicited transformed Herzl’s status and the scope of his activities. 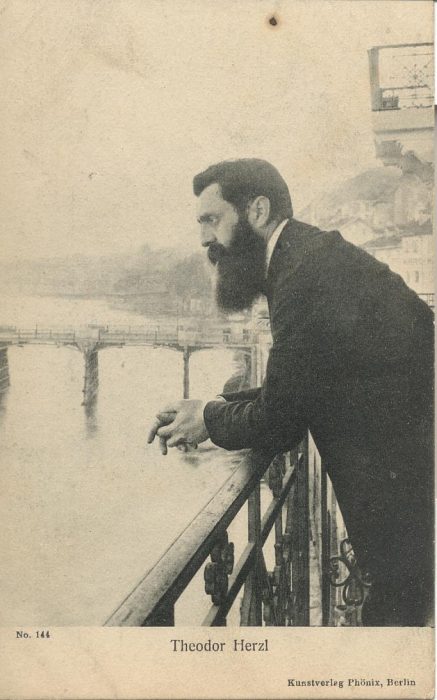 Herzl observing the Rhine from the balcony of Hotel Les Trois Rois during the Fifth Zionist Congress in December 1901, in Basel.

Herzl had considered a solution to the problems of European Jewry long before The Jewish State, but his contact with Jews who might be able to help further his ideas was limited. Now that he had become a household word all over Europe, however, many, including some prominent non-Jews, approached him about his plan. Among them was the British Embassy’s chaplain in Vienna, who introduced Herzl to Grand Duke Friedrich I, who in turn opened the door to Kaiser Wilhelm II of Germany. By the summer of 1896, Herzl was already on his way to Turkey in an attempt to realize his vision.

The most remarkable fact about Herzl’s meteoric rise to fame was that he had acted alone, without any financial backing and in no official capacity.

Friedrich I, grand duke of Baden and a friend of Herzl’s, succeeded his brother when mental illness rendered him unfit for the position. He secured Herzl’s first meeting with his nephew, Kaiser Wilhelm II of Germany

Herzl encouraged his new supporters, corresponding with them and traveling extensively to meet them, and gradually the idea of convening proponents of the Zionist idea from all over Europe emerged. Herzl long pondered whether and how to hold such a gathering, eventually summoning Jewish figures and organizations to Basel on August 29–31, 1897. 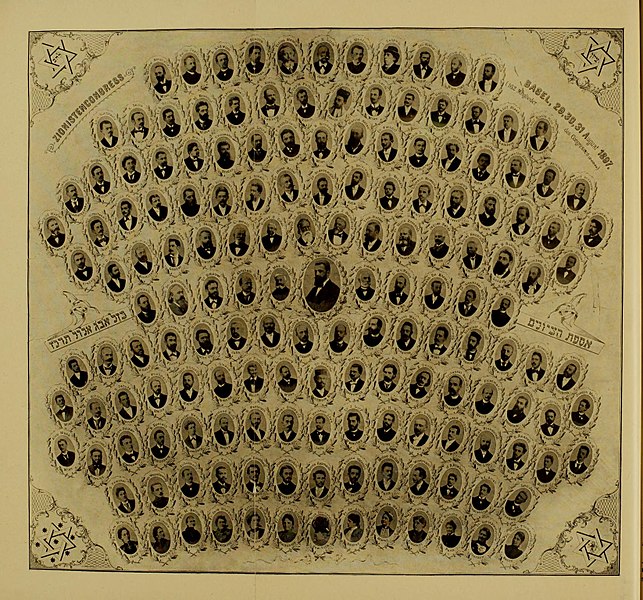 Delegates to the first Zionist Congress in Basel, August 29–31, 1897. Out of roughly two hundred participants, only thirteen were women, and all were relegated to the bottom row

His invitation speaks for itself:

Our brethren from far and wide will describe their aims and their situation; we will evaluate what the Zionist movement requires of its supporters. Our activities, until now isolated by distance, will be centralized…. We will witness an ingathering of the exiles, allowing all our efforts to be united in one direction…. Friends – and enemies – eagerly await the congress, and we must therefore be clear in our purpose and prove our capabilities…. Everything depends on a strong showing by our brothers in Russia, where most of our people can be found. We hope you understand that you are duty-bound to attend. Hebrew may be spoken at the congress, and there is a kosher hostel in Basel. (Shlomo Avineri, Herzl, p. 123 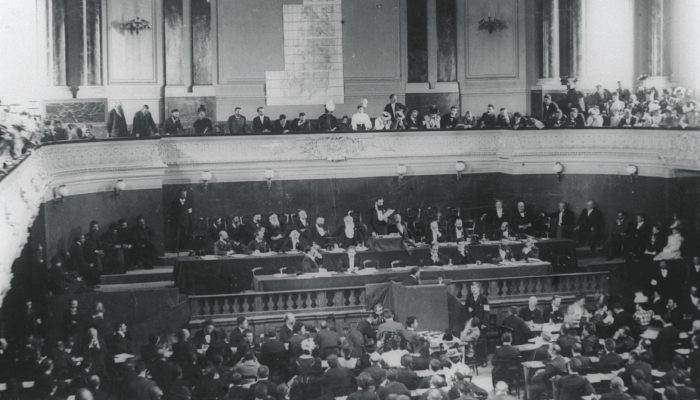 The image that became a Zionist symbol: Herzl speaking from the podium at the first Zionist Congress

The official invitation to the Congress, written in Hebrew

The First Zionist Congress took place in the concert hall of the Basel Municipal Casino. Herzl was convinced that Swiss neutrality would reflect favorably on the congress. Yet Switzerland also harbored Russian Nihilists (Lenin soon joined them), and Russian Zionists feared that their movement would be associated with revolution. Munich was suggested as an alternative, but the local Jewish community objected – Zionist aspirations contradicted the hard-won emancipation in which German Jews took such pride. They couldn’t conceive of moving to Palestine, considering themselves Germans first and Jews second. Herzl shifted everything back to Basel.

Late-19th-century Jewish celebrity – and one of the few to attend the first World Zionist Congress: British Jewish author, Israel Zangwill

Dressed for the theater

Herzl worked feverishly to organize the congress in time. He was determined that it be dignified and well-run. The staff spoke all the languages of the prospective delegates, and the program was printed in advance, which was complex and costly. The tags given to all participants were striking – beneath a blue Star of David surrounded by a red border, they declared that a Jewish state was the only solution to the Jewish question. Herzl insisted on formal dress for all delegates, as if they were visiting  the theater. There was even a pre-congress PR campaign: a special card was designed, press releases were issued, and Herzl invited the president of the canton of the city of Basel to one session. His attendance added to the congress’ impact in the press.

, Herzl sent him back to his hotel to change into his top hat and tails insisting on formal dress for the Congress. Max Nordau

Some two hundred delegates from twenty-four European countries and even from America turned up, although only sixty-nine represented Zionist organizations. Hundreds more (including some delegates’ families) watched from the gallery. Most participants were middle-class, emancipated Jews, including students, a cantor, a farmer, and a sculptor. From a Jewish perspective it was an impressive achievement, though Herzl had not managed to enlist many famous names or European intellectual icons. His friend Max Nordau, an influential writer and theater critic, and British author Israel Zangwill were the only internationally renowned figures to attend.

Accounts of Herzl’s attitude to Judaism vary widely – and viciously. Some regard him as almost totally assimilated, emphasizing his early proposition that all Jews convert to Christianity, while others stress his strong connection to Judaism and Jewish values. In any event, most participants at the congress were secular Jews. The ultra-Orthodox were not represented at all, and the eleven rabbis who did attend had no standing in the ultra-Orthodox community. Nevertheless, Herzl was careful to respect the Orthodox delegates’ needs. Before finalizing the congress location, he made sure there was a kosher restaurant in Basel, and even ate most of his meals there during the congress, though he disliked the food and did not keep kosher. On the Shabbat before the opening of the congress, Herzl attended synagogue and was called up to read from the Torah. In his diary he noted:

When I went to the podium, I was more moved than on any day of the congress. Emotion choked the few Hebrew words of blessing in my throat, far more than during the opening speech, the closing words, or any of the discussions. (ibid. p 136)

Herzl marshaled all his diplomatic talents and personal skills to soothe the egos of various congress delegates. Nordau assumed he would be elected chairman, and a number of Herzl’s friends were insulted when he accused them of changing the protocol. Herzl shaking hands with one of the delegates

But Herzl’s emotion was not limited to his synagogue experience. All his fears about the congress and his own organizational capabilities were allayed as he watched the delegates convene from day to day. “It was magnificent!” he wrote. As both a political correspondent and a playwright, he had a keen eye for the drama of public assembly:

The long, green table on the dais, with the elevated seat of the president, the platform draped in green, the tables for stenographers and the press – all made such a strong impression on me that I immediately walked out again in order not to lose my composure. (The Diaries of Theodor Herzl, p. 227)

Among the items contributing to the impeccable organization of the congress were official attendance cards. This one was assigned to “L. Jaffe, philosophy student,” and apparently belonged to Arieh Leib Jaffe, the Zionist poet and translator

The congress began impressively. Author and journalist Mordechai Ben-Ami, who had come from Odessa, wrote:

Walking to the casino, I was so excited that I thought my legs would give way…. The delegates greet one another warmly, speaking in low tones … Herzl walks over to the podium…. This was not the Herzl I knew, as I had seen him just the night before…. Before us rose a noble, almost angelic figure whose deep and piercing stare mixed quiet majesty with unutterable sorrow. This was, once again, not the elegant Dr. Herzl of Vienna, but a royal scion of the House of David, risen suddenly from the grave in all his legendary glory. (David Vital, The Zionist Revolution , p. 270)

The first Zionist Congress lasted three days. It consisted mainly of speeches and delegates’ reports on the state of Jewish communities in various countries, but practical suggestions were also made. The Jewish National Fund was founded, a literary committee set up to promote Hebrew literature, and arrangements made to collect official statistics regarding the size of the Jewish people. To vigorous applause and waving handkerchiefs, Herzl summed up the closing session, saying that the Zionist movement could be proud of its first congress. Many eyes filled with tears.

In Basel I Founded the Jewish State

What had Herzl hoped to achieve by holding the congress? His main purpose was to establish an authoritative body that could represent the Jewish people in the community of nations. There had been organized Jewish political activity throughout the 19th century, but largely based on brotherhood rather than nationalism. In the Damascus blood libel of 1840, for instance, wealthy and influential Jews from England and France intervened on behalf of their beleaguered brethren in Syria. True, Jews had promoted Zionist ideas in Europe, such as at the 1882 Focsani Congress of the Hovevei Tzion (Lovers of Zion) movement (see side-bar) and via settlement initiatives such as those supported by Baron Rothschild in Palestine. But Herzl wanted much more. He envisioned an official, overt Jewish political framework, a united front on the international diplomatic scene.

Herzl weeping among the ruins of Jerusalem. Caricature from the Vienna journalists’ union yearbook, 1896

According to Herzl, the first Zionist Congress was to be “a majestic demonstration, which will show the world what Zionism is all about.” Furthermore, he wrote:

The matter of the Jews must be taken out of the hands of individuals, however well-intentioned. A forum must be established that can call anyone to account for his action – or inaction – on behalf of the Jews. (Vital, p. 254)

The congress was thus a landmark in what was later termed “political Zionism.” Today, when we watch the prime minister of Israel address an international forum such as the United Nations, we are seeing the realization of Herzl’s dreams, culminating in the creation of an organized Jewish entity that operates as a legitimate player in the global political arena.

The events of 1897 in Basel made Herzl a modern prophet. As he famously wrote after the congress:

In Basel I created the Jewish state. If I said this out loud today, I would be greeted by universal laughter. In five years perhaps, and certainly in fifty years, everyone will perceive it. (The Diaries of Theodor Herzl, p. 22