The Viscount of Megiddo

Edmund Allenby will be remembered forever for his conquest of the Holy Land, though his remarkable military career began in South Africa, not Palestine | Yagil Henkin and Anat Stern

Edmund Henry Hynman Allenby was born in England in 1861. As a young man, Allenby dreamed of joining the British Civil Service in India, but after twice failing the entry exams, he pursued a military career instead. Admitted to Sandhurst Military Academy for Officers, he graduated in 1882. He then served as a cavalry officer in Africa and Britain. In 1891, Allenby was admitted to the Staff College in Camberley. Promoted to major in 1897, he was posted to a cavalry brigade in Ireland. He married that same year, and his son Michael was born a year later.

In South Africa’s Boer War (1899–1902), Allenby proved an outstanding cavalry officer known for his meticulousness and skill. In 1902, he was promoted to lieutenant colonel, commanding a cavalry brigade. Returning to England, he was appointed major general, then inspector general of cavalry in 1910. With the outbreak of World War I, Allenby was named commander of a British cavalry division in France. His forces ensured the orderly retreat of the British Expeditionary Forces (BEF) after the Battle of Mons in August 1914. As a result, he was appointed commander of the BEF Cavalry Corps.

During the Second Battle of Ypres, in May 1915, Allenby was put in charge of the British V Corps. He was often criticized for responding to every German victory with an immediate counterattack. Despite heavy British casualties, this policy produced results.

In October, Allenby was promoted to lieutenant general and took command of the British Third Army. He led British forces in the Battle of the Somme (1916) and the Battle of Arras (1917). Yet his troops branded him a “butcher,” and BEF commander General Douglas Haig promoted him to get him out of the way. In early June 1917, Allenby was promoted to general and dispatched to the Middle East. En route, he learned that his son Michael had fallen in battle in France. Allenby arrived in the Middle East on June 27 and promptly showed that when not bogged down by endless trench warfare, he was a talented and creative commander.

After the Third Battle of Gaza at the end of November 1917 and the conquest of Jerusalem, fighting halted in Palestine for several months.

Allenby, a devout Christian, had carefully coordinated the character of his entry into Jerusalem on December 11 1917 with British prime minister David Lloyd George, who’d asked him to deliver Jerusalem to the embattled Allies as a Christmas present, in time for December 25. The Commander in Chief of His Majesty’s Forces entered Jerusalem on foot, like a simple pilgrim, in stark contrast to his foe, German Kaiser Wilhelm’s entry on horseback nineteen years earlier.

Fighting finally resuming in the late summer of 1918.

On September 19, Allenby and his forces launched an attack in the Jezreel Valley known as the Battle of Megiddo – a name chosen more for its biblical and apocalyptic significance than for its exact location. Taking the Ottoman Empire by surprise once again, the general quickly broke through its defense lines.

Without losing momentum, Allenby advanced into Syria, conquering Damascus and Aleppo. Shortly afterward, the Ottoman Empire surrendered to the Allies.

Allenby’s phenomenal achievements earned him the rank of field marshal in May 1919, and he was raised to the peerage as Viscount Allenby of Megiddo in October of that year. When the war ended, he was appointed British high commissioner of Egypt and Sudan, a position he held until his retirement in 1925. 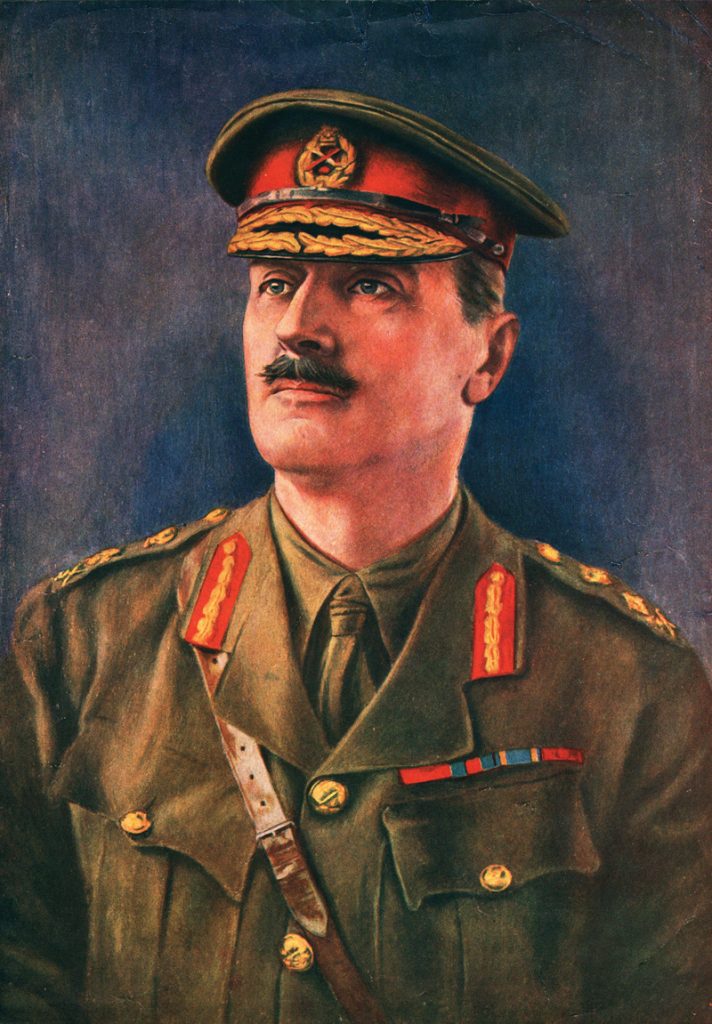 General Allenby in an oil by Henry Walter Barnet circa 1920