Few, Yet Many
Cosmopolitan Stamps
Cutting the Budget Deficit
By: איתמר עצמון

The first place ever to issue stamps showing a synagogue and marked with Hebrew lettering was, surprisingly enough, the Polish town of Luboml. The stamps were strange for other reasons too

Though few have heard of it, Luboml was one of Poland’s most ancient Jewish communities, once rivaling that of Lublin in size. Poland before World War II was home to dozens of such shtetls – small towns with thriving Jewish communities. A bustling market town and commercial center in the Belz-Chelm district, close to the border with Ukraine and Russia, Luboml has had a Jewish presence since the early Middle Ages. In 1564, Poland’s King Zygmunt Augustus II granted the community a bill of rights, and Jews soon became the majority population. By the 16th century, Luboml had produced a cadre of rabbis, who held broad administrative authority in the town and were also often appointed to key municipal positions in Poland’s main centers.

Despite the appalling casualties it suffered in the 1648 Khmelnytsky massacres (one account claims that nearly all six hundred Jewish residents were killed), the community bounced back so successfully that the poll tax imposed on Luboml by the Council of Four Lands in 1667 was more than quintuple the one collected from nearby Jewish towns. This period saw the construction of the Luboml Great Synagogue, a massive architectural landmark, and one of the oldest Jewish houses of worship in Poland.

Due to its location, Luboml comprised Jews, Germans, Poles, and Ukrainians. Jewish merchants in particular were attracted to the town, and by the beginning of the 20th century, more than ninety percent of the locals were Jewish.

According to the population register, the vast majority of Luboml’s Jews spoke Yiddish or Hebrew as their first language. Many had migrated from Poland’s larger cities and boasted a broad, traditional Jewish education. Newfangled movements such as the Enlightenment, Zionism, and the Bund (the socialist Jewish Workers’ Union) gradually penetrated the community during the second half of the 19th century.

The Great Synagogue of Luboml

With borders constantly shifting during World War I, Luboml changed hands several times. After the war broke out, it was occupied by the Austro-Hungarian Empire, and the Austrian army provided basic postal service. Following the defeat of the Austrians at war’s end, the area fell under Polish jurisdiction.

The post offices in this now Polish district had few if any stamps. Preoccupied with reinstating their authority, the Poles had no time or resources to print them. Wherever Austrian stamps were still available, they were simply overprinted with the words “Polish Postage.” Many towns issued their own stamps, each identifying its town of origin, until late 1919, when Poland began issuing national stamps.

In September 1918, the Luboml authorities issued five stamps of different denominations, in six colors. The series showed views of Luboml and its main buildings: the commercial center, the town square, the Catholic and Orthodox churches, and – surprisingly – the Great Synagogue. The illustrations reflect the town leaders’ cosmopolitan hopes of fostering ethnic diversity and religious and political freedom. But the Jews of Luboml were proudest of the fact that the town’s name appeared in Yiddish down one side of the stamps, with Polish, German, and Ukrainian along the other three sides, respectively – representing all four local languages. The Yiddish version, in Hebrew letters, was Shtot Post Luboml (Luboml City Post). 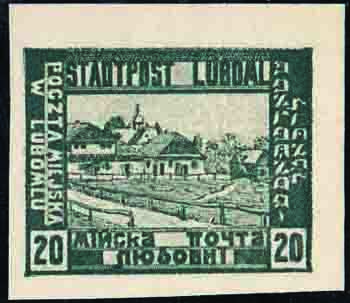 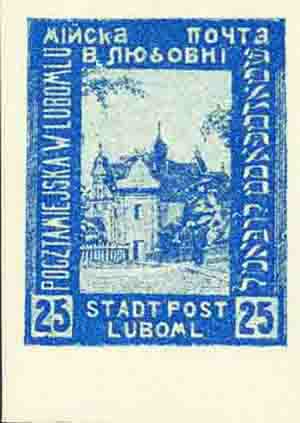 The Luboml stamps pose several mysteries. Why are only some sheets of stamps perforated? Why the blank space in the second row of every sheet? And why, on one in every ten stamps, are the digits denominating its value printed backward?

Practically all extant stamped envelopes are first-day covers, sold as collector’s items. Each one bears all the stamps in the series, marked with the date of issue.

The same printing press may well have prepared both envelopes and stamps. Like many other towns, Luboml found itself in dire financial straits after the war and may have covered the stamps’ costs by allowing the press – located in the Czechoslovakian capital of Prague – to sell these first-day covers directly to collectors. The fact that none of these envelopes is postmarked suggests that the stamps never left the printer or arrived in Luboml. Alternatively, perhaps no postmarked envelopes have survived; if all were mailed by the town’s Jewish residents, they may well have disappeared in the Holocaust along with their senders and recipients.

The commemorative cancel stamp on the first-day covers varies in design and color, suggesting that they were indeed stamped in Luboml and not just marked by the printing press for effect. One lone envelope was actually sent by the Ukrainian Legion – further proof that the stamps were actually used.

The lack of perforations may just be the result of a rush job at the press; the stamps were probably needed urgently. Or, like the blank spaces and the stamps issued with inverted numerals, the mixture of perforated and non-perforated issue was an attempt to create unusual stamp sheets in order to inflate their value as collector’s items. Stamp collecting was extremely popular in the early 20th century, and stamp dealing was a lucrative profession. Rare stamps, including those issued by small towns, were a specialty. Luboml may have seized this economic opportunity and designed five different stamps to increase the rarity of each. Sheets with additional “errors” would have been even more valuable. So although we could attribute the defective stamps to negligence, they could also be seen as an original way to replenish the town’s depleted coffers. 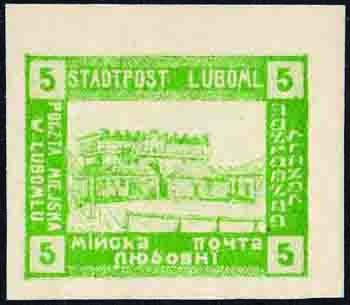 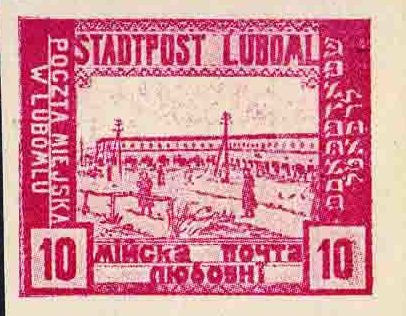