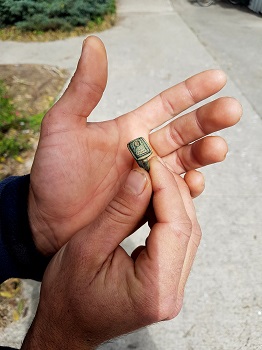 A medieval bronze ring was discovered by during landscape gardening in Moshav Yugav in the Jezreel Valley. The sharp-eyed gardener, Dekel Ben Shitreet, picked up the item while weeding, and on seeing that it was engraved with a human figure, decided to investigate further. He posted the ring on facebook for more information, where it was noticed by Dr. Dror Ben Yosef, who put him in touch with the Israel Antiquities Authority.

Archaeologist Dr. Yanna Chehnovitch has dated the ring to the 12th to 15th centuries, and the bald figure holding a staff has been identified as a representation of St. Nicholas, patron saint of travelers. Pilgrims often carried his image as a protective talisman. The ring might have been dropped, she suggests, by a pilgrim en route from to Mount Tabor, who would have passed through the present day site of Moshav Yugav. St. Nicholas was also said to work miracles and secretly provide for the poor, resulting in his becoming the cheerful character of Santa Claus who in Christian tradition distributes gifts on Christmas. 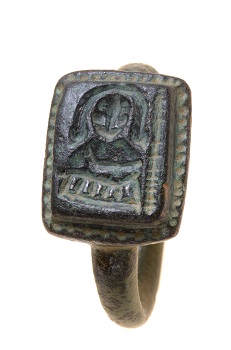 Ring with the image of St. Nicholas