Destination Jerusalem
Congestion-free Zone
From the Mundane to the Sublime
By: Yoav Sorek

How would Jerusalem, already congested at the holiday season, cope with a massive influx of pilgrims were the Temple rebuilt? A think-tank using models of urban city planning and the Saudi Arabians’ arrangements for the Hajj is currently hard at work | Yoav Sorek

In ancient times, the major challenge faced by the city administration was to provide water and accommodation, both at the roadside, for those approaching Jerusalem on foot, and within the city walls for those who had already arrived. When we translate this challenge into modern terms, inns and aqueducts give way to issues of congestion, crowd control and giant fluctuations in hotel occupancy. Questions of urban planning that would allow the city to function normally, both at over-capacity during the festivals and throughout the rest of the year, become unusually complex.

“Jerusalem has to be planned like an accordion, so that it can shrink and grow as needed,” says David Brukner, a member of a think-tank currently working on a planning scheme for the Jerusalem of the future – a city with the Temple at its center (see article: To the Mountain of the Lord). “It would be wrong to plan whole areas which would become virtual ghost towns as soon as the pilgrims left. Look at the desolation and decay affecting Olympic villages for which no suitable alternative use is found. But we have to be ready with solutions for congestion and increased demand for accommodation when the city’s population doubles or triples, or perhaps even more, during the festivals. The solution is one that combines taking up available space in local residential property by encouraging the resident population to offer rooms for hire in their homes, and the construction of enormous tent cities, with appropriate infrastructure, in areas that are somewhat further from the city, in which no permanent structures would be built. Possible examples would be in Emek HaArazim, to the west of Jerusalem, on the slopes of Issawiya in the east, on the ridge of Kibbutz Ramat Rachel in the south, and similar locations.”

The think-tank has been investigating the infrastructure developed by the Saudis for the Hajj in Mecca, when about three million people converge on the city, roughly half of them from abroad. The Saudi authorities set up a gigantic tent city in Mina, a location not far from Mecca, providing ideal accommodation for pilgrims: the tents are air-conditioned, centralized kitchens serving basic meals are located throughout the camps, and there are drinking fountains and washing areas as well as an internal transportation system, which also provides shuttle service to the major pilgrimage sites.

The Jewish pilgrimage, however, is somewhat different in its requirements, since the Torah requires that the pilgrims bring all manner of things with them to Jerusalem: the fruits of Maaser Sheni (the second tithe), the firstborn animals and other sacrifices. In fact, the pilgrims are supposed to behave during the festivals as householders, providing for the poor and the stranger, rather than being catered for by central kitchens. Nonetheless, we can learn a great deal from the Saudis’ logistics when it comes to providing accommodation, catering, and sanitary and transportation facilities for tens of thousands of people.

“The development plans call for giant parks in open areas on the outskirts of the city, ,” states an initial document by the Jerusalem think-tank. “During the three pilgrim festivals, these will be operated by the Temple Authority as camping areas for the pilgrims. The infrastructure for the pre-fabricated accommodation will be permanent, while the structures (or sukkot) themselves can be dismantled after the high season and kept in storage most of the year. Barbeque sites for roasting the Korban Pesach (Paschal lamb) are also included in the plans, with picnic areas where families can sit down together to eat it.”

Accommodation requirements will, according to Brukner, not only dictate many aspects of the design of the dedicated camping areas, but will also impact on the home-design of ordinary Jerusalemites: “We need to ensure that the superfluous space in the city’s permanent buildings can be utilized as fully as possible in the festival season, allowing families to share their homes with others. Most of the guests will be family members or friends, but there is nothing to stop other pilgrims from being warmly welcomed and accommodated. This is how Jerusalem coped with the influx of pilgrims in the Mishnaic period, and that is also what naturally happened in Gush Katif during the struggle against the expulsion. The population literally doubled, with visitors housed in residents’ homes. In the words of the Mishna, “No one ever told his friend he had found no place to stay.”(Avot de Rabbi Natan, 35)

Jerusalem today (2008 figures) boasts 9,283 hotel and guest-house rooms, and 2.5 million tourists visit the city each year. Adding hotel rooms to cater specifically to pilgrim holiday demand is not an option; the solution must be temporary. Examining the yearly pilgrimage to Meron for Lag BaOmer may offer a kind of solution: the crowds there approximate
350 ,000 men and women, most of whom do not sleep until they return home the following day. The testimony of Rabbi Yehoshua ben Hananiah (BT Sukka 53a) suggests that this was also the case at the water-libation celebrations on Sukkot. The commandment to stay overnight in Jerusalem only requires that the pilgrims remain within the city walls; they might just as easily discuss or dance the night away as sleep, until their departure the next day.” 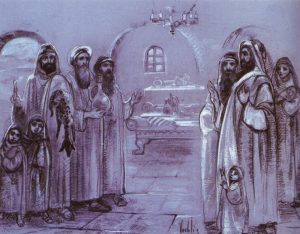 Pilgrims handing their hosts the skin of sacrifice

The Mishna (Bikkurim 3:3) offers a picturesque depiction of the pilgrims’ caravans:

“An ox with horns bedecked with gold and crowned with olive leaves led the way. A flute played before them until they drew nigh to Jerusalem…”

Unfortunately, this rustic pastoral scene evaporates when we think of tens of thousands of families arriving by the car-load, weighed down with all the requirements for a few days’ stay, honking as they try to get into Jerusalem from Highway 1, Highway 443 in the north, or the Tunnels Road from the south. The question of access, both to the city, and within its environs, is a vital one for anyone attempting to plan how Jerusalem could adequately accommodate such a mass of pilgrims without engendering a nightmare of congestion and dangerous crowding.

The first step, according to Brukner, would be to construct an extensive ring road surrounding the city, onto which all approaching vehicles would be directed, on which electronic signs would indicate the most convenient exit into the city at any given  time. Traffic from the north might thus actually enter the city from the east, and so on. Pilgrims would be encouraged to leave their vehicles at terminals located at various points along the ring road (see illustration, page 23) and to continue their journey by public transport. 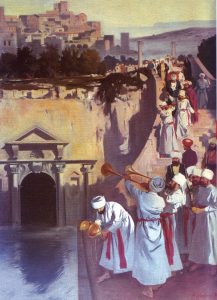 Pilgrims at the Pool of Siloam

Of course, the group’s working assumption is that Jerusalem has to be serviced – and will soon be serviced – by an efficient railway system. Apart from the station already scheduled, to be located near Jerusalem’s Binyanei HaUma, the railway line will continue to a special terminal, relatively close to the Temple Mount, to be built near the existing East Jerusalem Bus Terminal, north of the Nablus Gate. Construction of an additional airfield in the Jericho area should also be taken into consideration, bringing visitors to the eastern outskirts of Jerusalem, a relatively uncongested approach to the city.

The problem of transport also includes transportation within the city – from the camping areas to the business district, and, of course, to the Temple Mount and the Temple itself. During the festivals, private vehicles will not be allowed within the Jerusalem municipality; the pilgrimage management section of the tourism ministry will have to ensure that the public transport system runs an efficient, regular service. Areas close to the Temple Mount will be closed even to public transport. Access will be limited to pedestrians: both to fulfill the principle implied by the term “foot festivals” of Aliya leRegel – approaching the Temple on foot – with its inherent excitement, and to avoid the negative effects of motorized transport – noise, pollution and accidents. For those of limited mobility, automated walkways and escalators will be provided, leading to the Temple Mount, and light battery-powered vehicles – generally restricted for use by the Temple Authority’s administrative staff and the emergency services – will provide back-up where necessary. 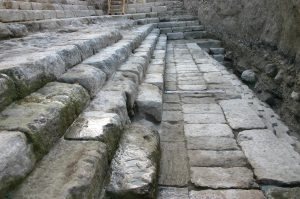 The steps leading from the Pool of Siloam to the Temple Mount. The steps were excavated by archaeologists Ronny Reich and Eli Shukron, who research the City of David.

From the Mundane to the Sublime

Of course, the Jerusalem experience that the foot festivals are supposed to create is more than just the sum of a complex logistical project. Aliya leRegel is primarily a festive spiritual experience achieved not through isolation but within the bustle of the crowds, one based on an abandonment of class distinctions and the creation, for a few moments at least, of an egalitarian society. The idea that “all of Israel are friends” derives from the halakhic status of all Jews during the festivals. The festive atmosphere is created by colorful markets filled with fresh produce, feasts and food fairs with participants by the thousands, all within the Temple environs. The Temple itself is the heart of this experience – sublime wonder inspired by the architecture, music, and spectacular organization in the service of He who defies definition, the One above. 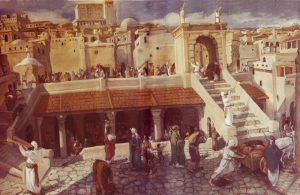