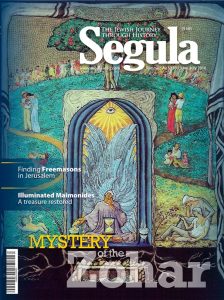 At the Crossroads of Modernity // Omri Shasha

The impressive figure of Rabbi Yosef  Hayim led the Jewish community of Baghdad into the 20th century, just as Modernity was beginning to make inroads, holding his listeners spell-bound with  unique synthesis of halakha, kabbala, and homiletics, while maintaining a relative openness to new ideas

Mystery of the Zohar // Yehuda Yifrach

Since the secret oral traditions of the Kabbala were first committed to parchment in the 13th century, the controversy has raged fast and furious. Who wrote the Zohar? And why?

A treasure divided, half of the richly illuminated manuscript of Maimonides’ Mishneh Torah is owned by the Vatican, while the other half has just found a new home in Jerusalem. Restored to its original exquisite richness, the illuminated Maimonides will be on view in the Israel Museum’s permanent exhibition hall when it re-opens this summer

Linked in legend since Biblical times with the Jewish people, the Ethiopian Church draws directly on the Hebrew Bible for its model of an earthly kingdom that unites religion, nationality, and state. The political ramifications include a pro-Western outlook rarely found in Africa and a readiness to stand firm against Islamic terror

Three Faiths in a Jungle // Ari Greenspan and Ari Zivotofsky

Links in a chain of secrecy bridging cultures and faiths, the Tomb of David on Mount Zion, Zedekiah’s Cave, and the Mahane Yehuda market all bear the mark of the mysterious society of Freemasons

The Secret of Leadership // Yaakov Medan

Nehemiah’s personal example and quiet authority allowed him to lead his people to achieve the seemingly impossible. Fully aware of the societal cost involved, he took his responsibility seriously, using his own wealth to ensure that rampant corruption was redressed

Haim Sabato’s voice is unique in its time and tone, a distilled “otherness” with distinctly Israeli overtones, which loses something in translation

A Jew at Arms // Yochai Ben-Gedalia