The Book of Exodus: A Biography

What can Princeton University’s Lives of Great Religious Books series possibly add to the reams already written on the enormous religious and political influence of the book of Exodus, particularly Michael Walzer’s classic Exodus and Revolution (1986)? In the tradition of the series, Joel S. Baden relates to the book as a literary whole, not just to the narrative of the Israelite slaves’ liberation from Egypt and its myriad reverberations throughout human history.

History frames this slim but dense “biography.” It begins with the lack of archaeological evidence – in both the Sinai Peninsula and Egypt in general – of the events recounted. And it ends with the broadest possible postmodern political echoes of Exodus’ message of freedom: in South America and among Hindu Dalits (untouchables) in India, Native Americans, and (presumably in a politically correct gesture toward the “plight” of the Palestinians) the original “victims” of the Exodus narrative, the Canaanites. “They are the last ignored voice in the text,” quotes Baden, adding, “We may identify with Israel, but we cannot replicate the sins of the past; we must live beside the Canaanites rather than forcibly dispossess or assimilate them.”

The author, a professor at Yale Divinity School, speculates on how the different narrative sources (P, J, and E) identified by the documentary hypothesis of Bible analysis might each have originated and been absorbed into the culture and oral history of ancient Israel. He then compares and contrasts Jewish and Christian development of the covenant sealed in the book of Exodus, depicting the Passover sacrifice as the ritual glue bonding the Jewish people together and as the basis of the Christian rite of the Eucharist.

The sacred meal of the family Pesach Seder essentially replaced the Paschal lamb brought to the Temple until its destruction in the first century. For Baden, this change democratized a strictly hierarchical society by shifting the locus of holiness from priests and the Temple to everyone around the table.

As for the Eucharist, the author offers a fascinating analysis of two paths in the Gospels: the first recasting Jesus’ Last Supper as the consumption of the Passover sacrifice, and the second in the Gospel of John, moving the date of the crucifixion by a day so Jesus himself becomes the Paschal lamb.

Equally stimulating is Baden’s discussion of Sinai and the centrality of law and commandments to Jewish peoplehood, in stark contrast to Christianity’s prioritization of the Ten Commandments as natural law over the minutiae of observance.

A thought-provoking book, notwithstanding its suggestion of Judaic studies as an alternative path to Jewish identity in the modern age, in lieu of commitment to the many commandments listed in Exodus. 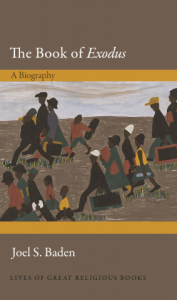 the book of exodus a biography