Irreversible damage is being inflicted on Judea and Samaria’s archaeological sites, as authorities on both the Israeli and Palestinian sides look the other way. In Archelais, for instance, a priceless source of knowledge is about to be lost forever // Assaf Avraham

The Holy Land’s ancient vistas and treasures play a vital role in the identity and faith of many hundreds of millions the world over. Though certain biblical locations have gained World Heritage status, theft and vandalism at archaeological sites – particularly in the West Bank – have soared in recent years. Unsupervised and unauthorized building is destroying history as site after site is bulldozed or plundered, its artifacts sold on the illegal antiquities market instead of yielding their secrets to scholarly research.

Preservation of ancient sites is frankly a luxury of modern society, which can afford to point to the universal value of civilizations’ remains. But this cause can also unite all nations invested in their present, enabling them to build their identity around historic memories for generations to come.

Over millennia, the Canaanite, Israelite, Samaritan, Christian, and Muslim cultures all left their mark on the hilly north-south axis of central Israel. Their remains represent a unique store of historical and cultural knowledge, revealing the forgotten heritage of the people who once lived here. Their story is our story – the story of human development.

But in today’s geopolitical reality, the archaeological centers east of the Green Line – once Israel’s border – are sadly unprotected and neglected. Modern towns are encroaching on ancient sites, destroying the mute testimony of the past, and potential tourist attractions capable of employing many are instead being exploited to enrich the few.

Years’ worth of sporadic plundering has been replaced by systematic use of heavy machinery to empty a site of its treasures, then build over it. Using metal detectors to locate valuable coins and other artifacts, thieves burrow through the historic strata, rendering them unidentifiable. The evidence is clearly visible in the scarred and pitted ground awaiting construction, and the damage to such sites is irreparable.

The consequences are clear. These sites are being destroyed, together with the priceless information they contain. Some, like Khirbet a-Tabiqa (the biblical Beth Zur) and Tel el-Natsba (thought to be Mizpah, a central site in the book of Samuel), are slowly becoming residential areas. Second Temple cities such as Archelais and Alexandrion (Sartaba) are raided daily. And that’s just the tip of the iceberg. 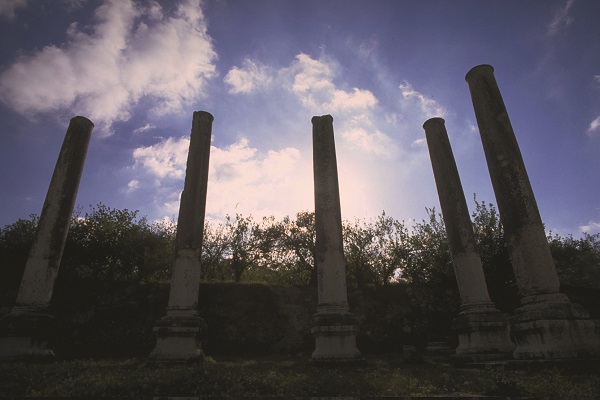 Archaeologists’ efforts have unearthed entire towns dating back centuries and millennia. Will they now be permanently destroyed? Roman pillars in Sebastia, in northern Israel

For decision-makers in both Israel and the Palestinian Authority, protection and supervision of archaeological sites is a low priority. Israel limits its preventative measures and intervention to those areas defined by the Oslo Accords as Area C, subject to joint Israeli-Palestinian jurisdiction, but even there, the country’s efforts are extremely limited and woefully inadequate.

Areas A and B, where Israel is unauthorized to enforce building regulations, are far worse off: entire sites are in danger of being lost to history, while others have already been destroyed. The PA allows construction on these sites and ignores the theft of antiquities.

Then there’s the ecological damage to Judea and Samaria. Natural resources are overexploited, the most obvious being the enormous chunks of hillside swallowed up by gaping stone quarries. Residential developments are also springing up unsupervised and lacking formal infrastructure. The last two, post-Oslo decades have seen ten times more building than the previous half-century. Much of the land is scarred beyond recognition, and the future looks grim.

The ongoing Arab-Israeli dispute is complex, but regional and global leaders alike must recognize that destroying the biblical landscape and heritage is both a crime and an irreversible tragedy. Laws must be enforced, and – perhaps even more important – the local population must be educated. Only cooperation between authorities on both sides of the conflict can save what’s left and safeguard its future. The legacy of the land of Israel shouldn’t be up for grabs. These international cultural treasures should be the focus of a global preservation effort – not only for mankind’s sake, but in the interests of their natural guardians, the people who live among them. 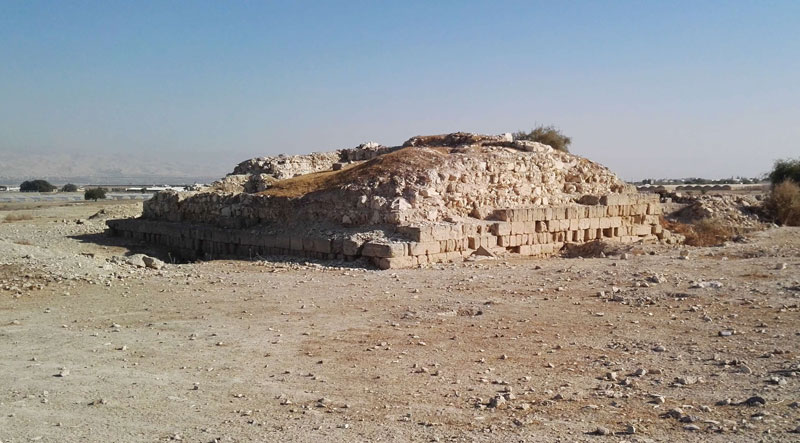 Archelais was built in the late first century CE on the remains of a settlement dating back to the First Temple. The town survived until the 13th century, and the impressive remains of a large Byzantine church have also been found here.

The archaeological site spans approximately eighty-eight acres and is the second-largest in the Jordan Valley, surpassed only by Jericho. Remnants of ritual baths indicate that at least part of the population was Jewish.

Second Temple historian Josephus attributes the founding of Archelais to Archelaus, son of Herod the Great (ibid., book XVII, LCL p. 346), who inherited part of his father’s kingdom. After Augustus Caesar deposed Archelaus, the town was handed over to Herod’s sister, Salome, who bequeathed it to Julia, wife of Augustus.

Those [dates] that grow at Archelais, Phasaelis, and Livias, vallies in the same territory, are highly esteemed. The more remarkable quality of these is a rich, unctuous juice; they are of a milky consistency, and have a sort of vinous flavour, with a remarkable sweetness, like that of honey. (Pliny, Natural History, book XIII, ch. 9)

Byzantine columns in Archelais, since pilfered

The site is divided between Area C, at west (near Route 90), and Area B, in the east. Over the years, it has been systematically dug up for antiquities theft and construction purposes. Mechanical diggers have expedited the process, and now the site is being built over. The archaeological damage is irreparable and among the most severe in the country, reflecting a complete lack of law enforcement. Extending into Area C, “development” here presents a clear timeline of the different stages that turn an archaeological site into a construction site.

The aerial photo above shows preserved antiquities – the ruins of the Byzantine church and a Herodian tower. Just off the road, pits have been dug by tractors to aid antiquities scavengers. At center, marked plots have been leveled for construction, and below them, a completed house and garden stand on a former archaeological site.