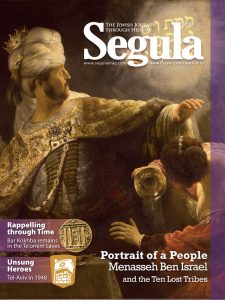 The Hope of Israel // Henry Goldblum

Inspired by rumours of the Lost Ten Tribes, he sought to fulfill the age-old vision of redemption by scattering his people to the very ends of the Earth. Although life dealt him many disappointments and his efforts often seemed to be in vain, hope was indeed a key word in the lexicon of Menasseh Ben Israel

“Tel Aviv is at the flicks”, mocks the song from ’48, describing the functioning of the first Hebrew city during the War of Independence. But the reality was quite different: Tel Aviv, the heart of the Jewish Yishuv, dispatched a disproportionate number of fighters; home front, air, and sea battles were decided there. Yet it has not found its unifying narrative

Back to Czernowitz // Daphna Yizrael

Once a Jewish hub with an international ambiance, now a Ukrainian provincial capital: a group of Israeli youths searching for the vestiges of Czernowitz’s Jewish glory found spectacular murals in what is today an Evangelical church

From the book by historian Zvi Yavetz, Israel Prize winner, about the city of his childhood

Stepping into the world of Shlomo Moussaieff’s antiquities collection at his home in Herzliya is more like walking into a magical Aladdin’s cave than a neatly categorized museum. His fascinating – and controversial – collection revolves around Moussaieff’s self-avowed obsession with proving the veracity of the Bible. “I collect to remind myself I am a Jew,” says the sprightly octogenarian

Rappelling to access hidden passages within the depths of the Te’omim cave, archeologists discovered a treasure trove of coins from the Bar Kokhba revolt. The greatest surprise was one peruta, a small bronze coin minted hundreds of years before by Yohanan Hyrcanus the Hasmonean. Long since removed from circulation, it must have been a symbol of hope for the besieged fighters

The coins from the Te’omim cave are part of the Israel Museum’s permanent exhibit, featuring a copper statue of Hadrian and a triumphal arch from Tirat Zvi

The Second Temple was begun with a building permit from the Persian empire, but when it was rescinded the exiles found creative ways to continue construction. The “illegal” building they erected inspired later generations in their heroic struggle to build, rebuild and build again

From The Lubavitcher Rebbe  to his wife, America in the late 1920s

Very few people are aware that Gershon Salomon, the veteran activist of the Temple Mount Faithful, is the scion of an old Jerusalemite family of millers. The preservation folder of a simple-looking house in the heart of Jerusalem’s Nahlaot neighborhood tells their story

Musing on history, alternative history, and theology based on the surprising final scene of Tarantino’s film

Maimonides in his World and Ours // Shai Secunda

All in the Family // Matthew Kalman

Why are there so many Jewish comedians? From Sholom Aleichem to Jerry Seinfeld, via Groucho Marx and Woody Allen, Jews have been telling great jokes – usually at their own expense