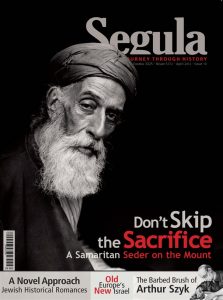 The paschal lambs are bleating on the road to Nablus. The community elders are decked out in white and the final preparations on Mt. Gerizim near completion

The Christian kingdoms of medieval Europe found inspiration for their national vision in the biblical narrative of God’s chosen people. To the Jews in their midst, most new incarnations of Israel would prove to be wolves in sheep’s clothing

Scott and Byron, Lehmann and Mapu – historical novels were a significant factor in the rise of national consciousness which changed the face of nineteenth-century Europe. Zionism was no exception

Arthur Szyk fought valiantly as an officer in the Ukrainian army, but in defense of his own people his most potent weapon was his brush. His cartoons assailed his enemies, while his patriotism found expression in richly ornamented declarations of independence – Polish, Israeli,and American

The Science of Naming // Elka Weber

A Bonfire of Vanities // Hadassah Assouline

One sentence in the concluding prayer of every synagogue service infuriated both Christians and apostates as an anti-Christian slur aimed at their messiah. The resulting imperial decree wiped the offending words from the prayer books of Ashkenaz until today

The Hole in the Coin // Itamar Atzmon

The Jewish population were agog at the thought of exchanging their Egyptian currency for British Mandate coins stamped with Hebrew letters as well as Latin and Arabic characters. The Arabs on the other hand, were more inclined to boycott the Palestinian Pound