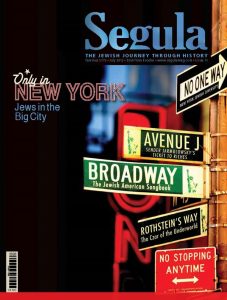 For one in four New Yorkers at the turn of the twentieth century, Jewish identity was in the streets they walked and the air they breathed. In the intensely homey atmosphere of Gotham, formal religious affiliation was not a necessary ingredient of being Jewish. But when fifty years later, Jews moved to the suburbs, their  need for touchstone institutions grew – almost in inverse proportion to the Jewishness of their surroundings

New York’s Jewish gangsters lived fast and furious. Exploiting the criminal opportunities created by Prohibition, they masterminded a network of crime that spread far beyond New York and earned their fellow Jews’ scorn – and admiration

Broadway was a springboard to integration for talented Jewish arrivals from Europe, yet their musicals’ immigrant themes are unmistakenable

East European Jews and the Business of Mass Migration, 1873-1914

Jewish as Can Be // Rachel Gordan

Are New York’s Jews opting for more Judaism or less? Is their Jewishness nothing more than an ethnicity summed up by bagels and borscht, or is the growing visibility of ultra-orthodox communities an indication of future trends? The range of choices for Jews in New York has never been wider

Jew in the City // Jo Morris