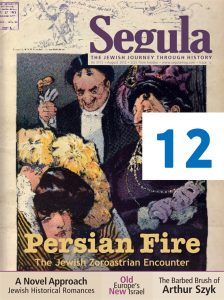 In the foothills of the Italian Alps, far from the oppressive heat of Rome, the Jews of Turin stood out as active players in the struggle for a united Italy – and planned a synagogue to match their achievements

Grace Aguilar was no less romantic a figure than the heroine of her first novel, The Vale of Cedars. Her noble characters, both fictional and historical, were conceived as role models of devoutness and loyalty for Jewish readers torn between modernity and their ancient faith

A Sect at Risk // Dov Kesselman

Separated for more than a thousand years, Karaites and Jews coexist today in the State of Israel and may soon be indistinguishable

The Wedding that Wasn’t // Yochai Ben-Gedalia