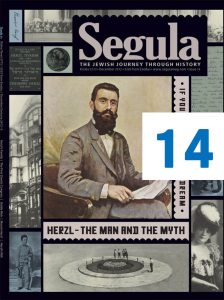 It seems sadly ironic that Theodor Herzl, who probably did more than any other single individual to re-establish a homeland for the Jewish people, failed miserably in his attempts to build a home of his own. The tragedy of the short-lived Herzl dynasty

“In Basel I Founded the Jewish State” // Asael Abelman

Though few famous names attended the first Zionist Congress in Basel, the enormous energy Herzl invested to ensure the dignity of the occasion made Zionism a political movement no one could ignore

Teaser: Born in Kiev, raised in the U.S., and Israel’s only female premier to date, Golda Meir let nothing stand in her way when she thought she could make a difference. She remains the only woman politician buried on Mount Herzl

The Shrine on the Mountain // Ophir Yarden

The site of Herzl’s tomb and the nearby military cemetery have become central locations in the celebration of Israel’s national holidays. Why did this hill in modern Jerusalem supersede more traditional sites? And what does that choice reveal about the ongoing tension between Zionist values and Jewish tradition?

If You Will It // Ariel Feldstein

Until recently, at least part of Herzl’s will remained a dream. Fifty-nine years late, the children the Zionist entity preferred to ignore were finally buried at his side

A Storm in a Teacup // Denise Rein

The unpublished notebook of Ernst Straus