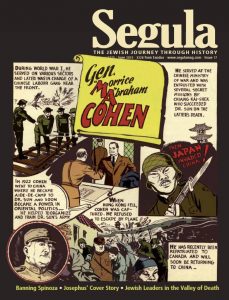 Scion of an aristocratic, priestly family in Jerusalem, Josephus Flavius explored various sects in search of his identity. As a rebel commander in the Great Revolt, he defected to the Romans, becoming one of the most controversial figures in Jewish history

Fight for the Spirit // Isaac Hershkowitz

Though physical help was largely beyond their powers, Jewish religious leaders in the Holocaust sought to ease the spiritual pain of their followers, searching for the path by which Judaism, as well as Jews, could survive

A delinquent East Ender makes good as a brigadier general in revolutionary China. Not quite your typical Jewish immigrant route – but then there was nothing ordinary about Morris Cohen except his name

Even in liberal 17th-century Amsterdam, Jews and Christians alike were appalled by Spinoza’s heretical philosophy. But far from silencing the renegade, his excommunication only made the quiet recluse into an icon

What conclusive proof of identity could a traveler offer when no photographs existed? The ins and outs of travel passes