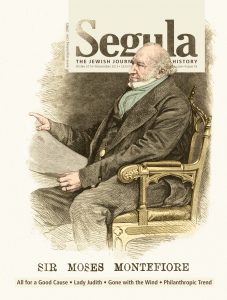 Montefiore’s philanthropy was legend not only among Jews. Working with Christian activists, he promoted Jewish causes in the name of humanity and civilization, and gave without regard for creed or nationality

For half a century, Lady Judith Montefiore was the proverbial great woman behind a great man, partnering her famous in his husband philanthropic activities and strengthening his commitment to Judaism

Gone with the Wind // Tamar Hayardeni

Almost nothing remains of Sir Moses Montefiore’s costly efforts to bring the impoverished Jews of the Holy Land into the modern world. But though the institutions he established swiftly disintegrated, his vision laid the foundations of a functional Jewish society in the land of Israel

At Rest in Ramsgate // Tal Kra-Oz

Not content with having the soil of Bethlehem strewn on his coffin, Sir Moses Montefiore recreated a piece of the Holy Land for his family mausoleum

Montefiore’s census taking was an essential part of his attempts to modernize the Holy Land, but many saw it as the source of all their ills

Excerpts from his diaries and his wife’s, edited by Dr. Louis Loewe