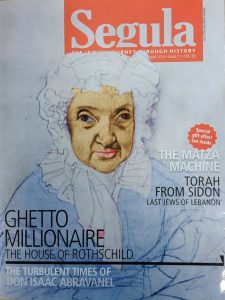 Don Isaac Abravanel rose to the greatest heights of two powerful medieval courts only to be dashed to the depths as a fugitive Jew. Was his grandfather’s apostasy the source of his determined loyalty to Judaism, or was it his conviction that salvation was just around the corner?

Mayer Amschel may have turned the name Rothschild into a synonym for wealth the world over, but he himself was born and died in the Judengasse, Frankfurt’s squalid Jewish ghetto

Today most people buy their matza in the supermarket, but before machine-made matza was invented, there were almost as many types of matza as there were Jewish communities. And when war made Passover necessities hard to come by, creative solutions brought their own innovations to the age-old order of the Seder

An ancient Torah scroll brough from Sidon, Lebanon by paratroopers during the Lebanon War in 1982

Aryans on the Defensive // Yochai Ben-Ghedalia

Who was behind a mysterious Hebrew poster circulating in Italy in the 1920s – the Jews or their enemies?