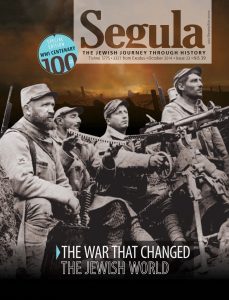 The greatest tragedy of World War One was the fact that its leaders started out fighting yesterday’s war – and their troops paid a terrible price. New weapons wrought carnage on the killing fields, but there were discoveries that saved lives too

What began as the British defense of the vital Suez Canal ended up a fierce offensive that opened up the Holy Land to Allied forces. Incredible logistics, sophisticated decoys, and a larger-than-life horseback charge all made this battle unique in the agonizing standoff characterizing most of World War I

Return of the Spies // Yemima Hovav

In the dark days of World War I, members of the Nili spy ring foresaw the new order emerging in the Middle East and opted to work with the British, despite all the risks. To other early Zionists, they were foolhardy adventurers, or even traitors

Ecstatic at the thought of gaining an independent homeland, the Jewish community in the Holy Land was eager to fight alongside the British in 1917. Yet this regiment of the Jewish Legion gave its British commanders more than they’d bargained for. Excerpts from the diaries of Joseph Shapira, corporal, Fortieth Battalion of His Majesty’s Royal Fusiliers

Long overshadowed by Holocaust literature, the Jewish soldier’s experience of World War I posed unique questions of Jewish identity and spawned a genre all its own

Like their comrades, Jewish solders made great efforts to stay in touch with their families at home. Their diaries, letters and postcards paint a unique picture of life at the front