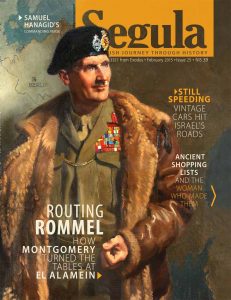 Faced with kilometers of trenches and barbed wire, and the Third Reich’s most talented commander, General Bernard Montgomery had to use all the tools at his disposal to break through Erwin Rommel’s line of defense at El Alamein. His victory was a turning point of World War II – for the Jews of Mandate Palestine as well as for the Allies

Though married to a senior official in King Hammurabi’s government, Zinû seems typical of women of her time – and ours. Her letters to her family show how little relationships have changed in the last four thousand years

Poet, scholar, politician, and soldier, Samuel Hanagid stands out even among the giants of Spanish Jewry’s golden age. His military achievements and diplomatic skills made Granada a great kingdom – and won him the bitter enmity of his Muslim rivals

An elaborate spy network involving highly respected rabbis as well as Enlightenment Jews smuggled shocking news of the 1881 pogroms in Russia out to Europe, preventing a czarist cover-up

Hoping for a Miracle // Itamar Atzmon

Why would a community under Roman siege bother producing its own makeshift coins? The answer lies in their inscription, whether it reads Gamla (the town) or Geula (redemption)