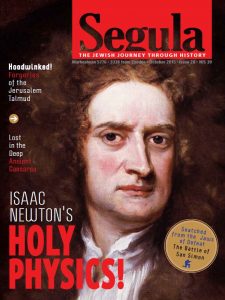 For Sir Isaac Newton, the laws of motion and mathematics were not personal discoveries, but divine gifts, encoded into the design of the Tabernacle

Of all King Herod’s grandiose projects, the port of Caesarea was the most ambitious, especially from an engineering point of view. Why did he build it where there was no natural bay, and how did the port disappear in just one generation?

The Battle on the Hill // Yeshurun Fischer

Bitter and bloody, the battle for Jerusalem’s San Simon monastery in 1948 was etched deeply into the memories of all who fought there. Their bravery and self-sacrifice forged the founding ethos of the Israel Defense Forces

The news set both rabbis and Jewish academics aquiver. Unpublished sections of the Jerusalem Talmud had suddenly surfaced in an unknown manuscript. A dubious character, accused of polygamy and wanted by the German police, managed to suspend all disbelief – until everyone discovered the truth

Where better to play the game of Jewish genealogy than at an international conference for aficionados, professional and amateur? The latest news on family trees hit Jerusalem this past summer

Zikhron Ya’akov and its area

Damned If You Do // Elizabeth Levin

US Jewish Army Chaplin writes about Dachau after WWII