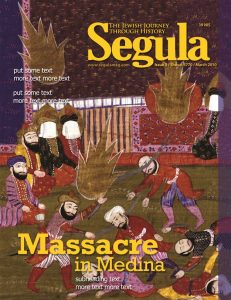 Although Bertha Pappenheim never had children of her own, she did everything she could to rescue Jewish women and children from a cruel fate, laying the foundations for the modern profession of social work and the religious feminism of today. Many years earlier, Bertha indirectly facilitated the development of psychoanalysis: She was Freud’s “Anna O.”

Priestly fugitives from the time of the second Temple, the Jews of the Arabian desert once lived like kings. Desolate ruins on the hilltops and the testimony of Islamic sources are all that remain of the cultural riches that first inspired, then infuriated Muhammad

While limited to two dimensions, the creative artistry lavished on these manuscripts frequently breaks the bounds of Jewish convention to revel in the full palette of possibilities poised at the artists’ fingertips.  The Braginsky collection as displayed in the Israel Museum does full justice to the reputation of the People of the Book

The city of the famed Greek cheesemakers houses a resplendent synagogue and a neglected cemetery, testimony to the priorities of a small but unique community. The liturgy here preserved is the closest in existence to the ancient tradition of the Land of Israel

Did You Say Magic? // Shai Secunda

Magic and witchcraft were living, kicking phenomena in Judaism in the past and despite all claims to the contrary, are still with us today. Forbidden outright by biblical sources and outlawed by our rationalist society, the Jewish occult is finally becoming a subject of academic study. An intellectual journey

Putting pen to paper to fulfill his father-in-law’s last wish, Rabbi Israel Isser Fish never dreamed that he was in fact writing the opening lines of a new responsa on the subject of interest payments. Yet beyond the niceties of Halacha emerging from his correspondence with Rabbi Israel Feinstein zatzal, the value each attached to honouring a parent’s wishes cry out from every line